Just as Loretta Lynn sang “We’ve come a long way, baby” over 40 years ago, the same can be said about the aerial photography and mapping market these days. We have seen amazing advances over the last 100-plus years when it comes to aerial photography, both with cameras—resolution, power, 3D, etc.—as well as capture methodologies—UAVs, airplanes and satellites. What originally began as a fascination for having a bird’s-eye view of the world has quickly shifted to more of a necessity in how we view our planet so we can better navigate, plan and understand the world we live in. With virtually every industry having a use for mapping or aerial photography, the way people experience maps is going through a paradigm shift with 360-degree views, 3D models, and the intersection of imagery and data.

One of the more intriguing technologies we have seen to date is the introduction of geo-enabled 360-degree aerial imagery. We saw this technology take shape in 2006 when Google first introduced Street View, allowing viewers to experience 360-degree panoramas from street level. Now with aerial applications of this technology, users can experience the built world from perspectives never available before. Before we get into this amazing technology, let’s take a look at the development of aerial photography and how far we have come.

The History of Aerial Photography 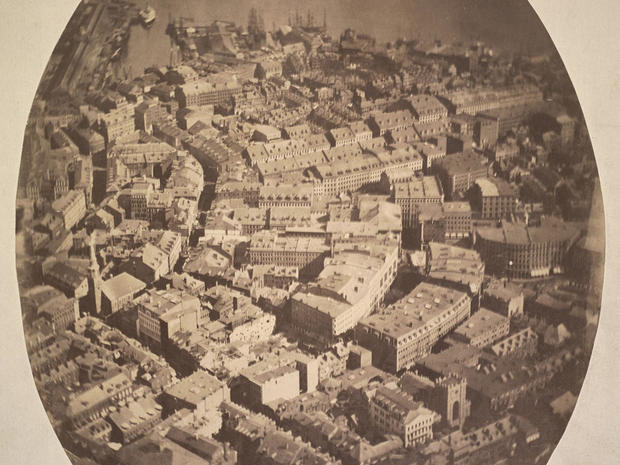 Image 1: "Boston, as the Eagle and the Wild Goose See It," by James Wallace Black, captured on October 13, 1860 from a balloon—the first aerial photograph taken in America. Courtesy: Boston Public Library.

The capture of images from manned aircraft really started to take shape during the First and Second World Wars, where military commanders saw the potential advantages that aerial imagery could bring when surveying the battlefield. This brought photographic mapping to the mainstream, as both the public and private sectors quickly adopted the use of aerial imagery in their quest to improve topographic mapping.

The space race quickly brought aerial photography to new heights as world powers pushed for supremacy in aerospace technology and achievements, leading to the development of satellite imagery. According to the Union of Concerned Scientists, there are more than 2,666 satellites orbiting earth that are being used for surveillance, forecasting and more.

The turn of the 21st century saw some great advancements in aerial technologies. Lidar systems were capable of 2,000 to 25,000 pulses per second, making them ideal for topographic mapping applications. We also saw the introduction of DIY drone equipment. Even though military drones had been capturing aerial images as far back as the 1980s, the new wave of commercially available drones have made aerial image capture available to the masses. Now, just about anybody has access to low-cost technology that can take high-quality images and video of the world below.

It’s All About the Angles

Despite all of the new technologies available, orthophotos produced by nadir aerial images have been the angle of choice for thematic information extraction and planning processes. The rectangular footprints of nadir aerial images make mosaic dataset creation and exploitation easier for GIS, as GIS software has traditionally been designed to work with rectilinear view data and imagery. Vertical imagery also allows for the scale of images to be calculated easily, allowing for the measurement of objects and distances. The primary drawback of vertical imagery is the fact that the lack of angle truly limits other information you can derive from a photo. Even if you have high-resolution imagery, you are missing out on being able to decipher details of the target from multiple vantage points.

Oblique imagery, by comparison, is taken at off-nadir angles so the side of objects can be viewed, as well as the top of the object. It gives viewers a wealth of information that isn’t found in traditional aerial photography taken at nadir. Oblique imagery is captured by digital cameras specifically designed for collecting imagery at an angle and uses GPS and measurement units to provide positioning information. With oblique imagery, a user can view and analyze a house, building, road, land or any other object quickly and accurately.

The convergence of new developments in digital imagery, GPS, augmented reality, immersive reality, mixed reality, 360 degree and virtual reality is pushing the boundaries of what we can do with images and maps. People are always looking for better ways of experiencing the world we live in. Whether it be business or pleasure, our means for interfacing with digital information is changing every day.

We have been living in a 2D world for some time now, but 3D imagery is emerging as many aerial and satellite imagery companies are capturing areas in 3D photos. It Is quite an exhilarating experience to zoom around a digital 3D map; it provides such a realistic representation of spatial dimensions. Even though 3D grabs a lot of attention due to the “wow” factor, it still has some limitations. Believe it or not, there are still some pretty exciting new 2D technologies that are changing the way people experience maps.

One of the bigger developments in the aerial photography space is the availability of high-resolution, geo-enabled 360-degree aerial panoramas that provide both vertical and oblique perspectives and allow for completely immersive experiences of the world below. For many aerial imaging projects, it is important to have both perspectives, and to easily be able to navigate throughout the viewer as if you were controlling the aerial camera yourself.

This type of technology has been available from ground level for a fair amount of time. As mentioned earlier, Google Street View provides 360-degree panoramas from street level; similarly, 360-degree interior virtual tours have been around for a while as well.

With immersive 360-degree panoramas, you can see specific details of your city or area that have never been available before. Not only can you see the front of a building or area, but you can look at the back and sides, virtually flying through an image, rotating views in every possible direction to see details you can’t see in just a two-dimensional photo. Unlike 3D maps, these aerial panoramas utilize real imagery, which allows for high resolution viewing, with effective ground sample distances of up to 4 inches per pixel. 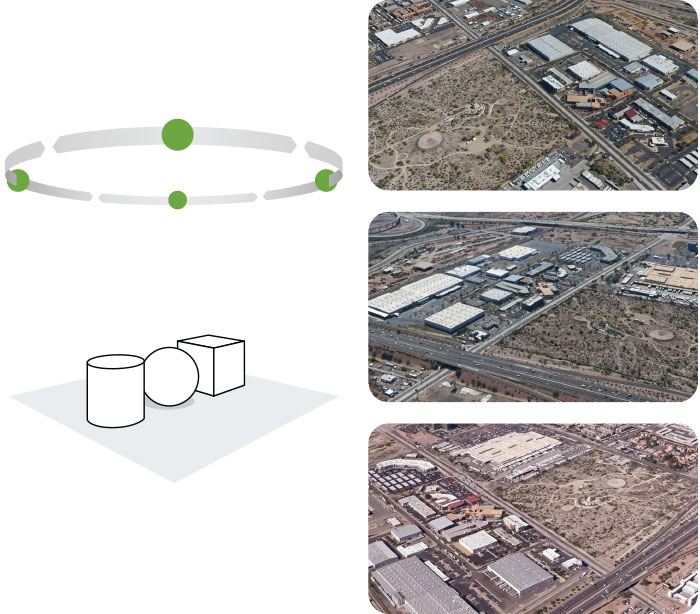 One of the biggest challenges for this technology has been the ability to geo-enable, or georectify, images that display depth. Georectification is the process of taking an image and referencing it to a spatial grid, so that the image can be used to provide an accurate data layer with corresponding points of reference. Georectifying a nadir photo is pretty straightforward; you simply apply a spatial grid, and identify points on the image that correspond to points in a coordinate reference system. Since there is no elevation in a vertical, or nadir, image, the process is less complex than that of georectifying an oblique or spherical image.

Imagine trying to lay a traditional spatial grid over an oblique photo—things get a lot trickier. Since oblique photos are perspective projections, they must have a slightly different set of projection criteria applied to them in order to contain an element of geo-rectification.

With the combination of high-resolution real imagery, georectification and the ability to navigate throughout an image in 360 degrees, we are seeing a change in how people in different industries experience maps. This isn’t necessarily a replacement for traditional orthophotos that are ideal for measuring true distances or having super high-resolution nadir perspectives to spot irregularities on the ground. Rather, it’s a supplement to them. However, industries such as real estate, insurance, retail, travel, education, entertainment and technology are quickly realizing the benefit of experiencing perspective (foreground and background), location, structure and topography in 360-degree panoramas to help them make more informed decisions, increase engagement and increase revenues.

Aerial photography has a rich and storied history that has long captivated people all over the world. The constant draw of humans wanting to see the world we live in from above will always push aerial photography and mapping technology at an exponential rate. We are just scratching the surface with all of the daily improvements in data, photography, aviation (fixed-wing and UAVs) and satellites. It is exciting to think about how these advances will alter the way we see ourselves, and the world we live in, and ultimately, make life more safe, efficient, and exciting.

Raising the Bar for GIS Applications in Government Settings
Top Geospatial Articles of 2020
The Game's Afoot: Exploring the Geography of Sports
Top Geospatial Webinars of 2020
Top Geospatial News of 2020
How much do you really know about the U.S. Census?
Modeling Disease & Behavior Using GIS
A Pathway to Creativity and Dreams, Paved with Legos
Ghost in the Machine – Exorcise Phantom Addresses with Delivery Point Validation
The Emergence of Geo-Enabled 360-Degree Aerial Imagery
Why Cartography Still Matters
Podcast: Community Mapping and Social Justice - A Conversation with Black Girls MAPP
GIS Jobs: Current Industry Expectations
Three Predictions for the Geospatial Industry by 2025
Podcast: Why should you take a closer look into Open Source GIS?