GeoInspirations: Barry Martinez - Overcoming the Past for a Bright Future in GIS

Editor’s note: Thank you for joining us for this edition of GeoInspirations, a column celebrating the work of geography’s most influential professionals. Today our distinguished columnist, Dr. Joseph Kerski, features Barry Martinez, graduate student at California State University, Los Angeles.

I met Barry Martinez at the American Association of Geographers conference in 2017. I was immediately impressed by the story of his life and career journey, and loved the way he referred to himself as “Spatial Barry.” My respect for him continued to increase over this past summer when he shared with me his activities at NASA, but even more importantly, I respect his honesty and candidness in his tireless pursuit of knowledge. It is my great pleasure to introduce him to Directions Magazine readers and, through his story, inspire you to be a lifelong learner and to make a positive difference in our world.

“Academically speaking, albeit not always being focused up to my potential during different periods in my life, I have genuinely always had an intrinsic desire for acquiring knowledge and educating myself,” Barry told me. “After graduating from high school, I enrolled in junior college the following fall semester. Nevertheless, it took me over four years to complete a two-year degree. Although I maintained an interest in education, I was also preoccupied with other distracting areas of interests and relations. These self-inflicted misgivings inevitably dissolved … my interest, potential, and progress relative to my studies. I had to repeat many classes before passing them, had a very low-grade point average, and just wasn’t as ambitious or motivated enough in that period of my life. I did continue taking at least one class at other colleges through my late 20s, reassuring myself that if enrolled, I’d still be progressing even minimally. However, I then moved to Hollywood, California at the age of 27, and for lack of a better phrase, ‘there went the neighborhood.’ I simply allowed myself to get quite sidetracked, ultimately, lasting 12 years. Nevertheless, given that we all experience hardships, setbacks, strife, and hurdles in life, the scope of this story and the inspiration within it can be of encouragement to anyone who has had difficulties along the way, but still has the ambition and desire to succeed and better themselves.”

“In 2013, at the ripe old age of 40, with no family as both parents had passed, absolutely nothing to successfully show for myself except experience, as well having an empty feeling inside of no substance, I made a critical judgement call … to return to school and obtain my bachelor’s degree,” Barry continued. “In choosing what I wanted to study and obtain a degree with, I decided that it would primarily be something I could find myself just genuinely content and happy doing, as opposed to thinking how much money I could make. In making the decision, I specifically asked myself, ‘what things do I enjoy doing in my free/spare time that [have] academic application on which I can compound?’ I entertained ideas of various academic subjects, and in the end, I decided that what was of most interest to me is reading and studying maps, which I genuinely enjoyed.”

“With full contentment, I chose to go back to school for geography,” Barry said. “When I started back to school in the fall of 2013, I did not know what GIS was, nor was aware that I could obtain my B.A. in geography with a concentration on GIS. I have a previous A.A. degree in computer science and I love maps in every aspect, so it was just a natural decision to progress towards the direction of GIS. Fast forward, upon completion of my B.A. in geography with a GIS focus, I chose to apply and was accepted to graduate school for my master’s at Cal State in geography, again with a GIS focus. During my last semester as an undergrad, Cal State, LA was one of the few universities across the country that was awarded a $5 million NASA STEM program to promote diversity among the sciences. I recall seeing the flyers on the wall in the halls at school and inquired with our department chair, who suggested that everyone who has an interest should apply for the NASA fellowship. So, I did apply, and for the most part, dropped it from my memory and kind of just forgot about it, with the assumption that ‘there’s no way I’m at such a level to be accepted to such a high-level opportunity.’“ 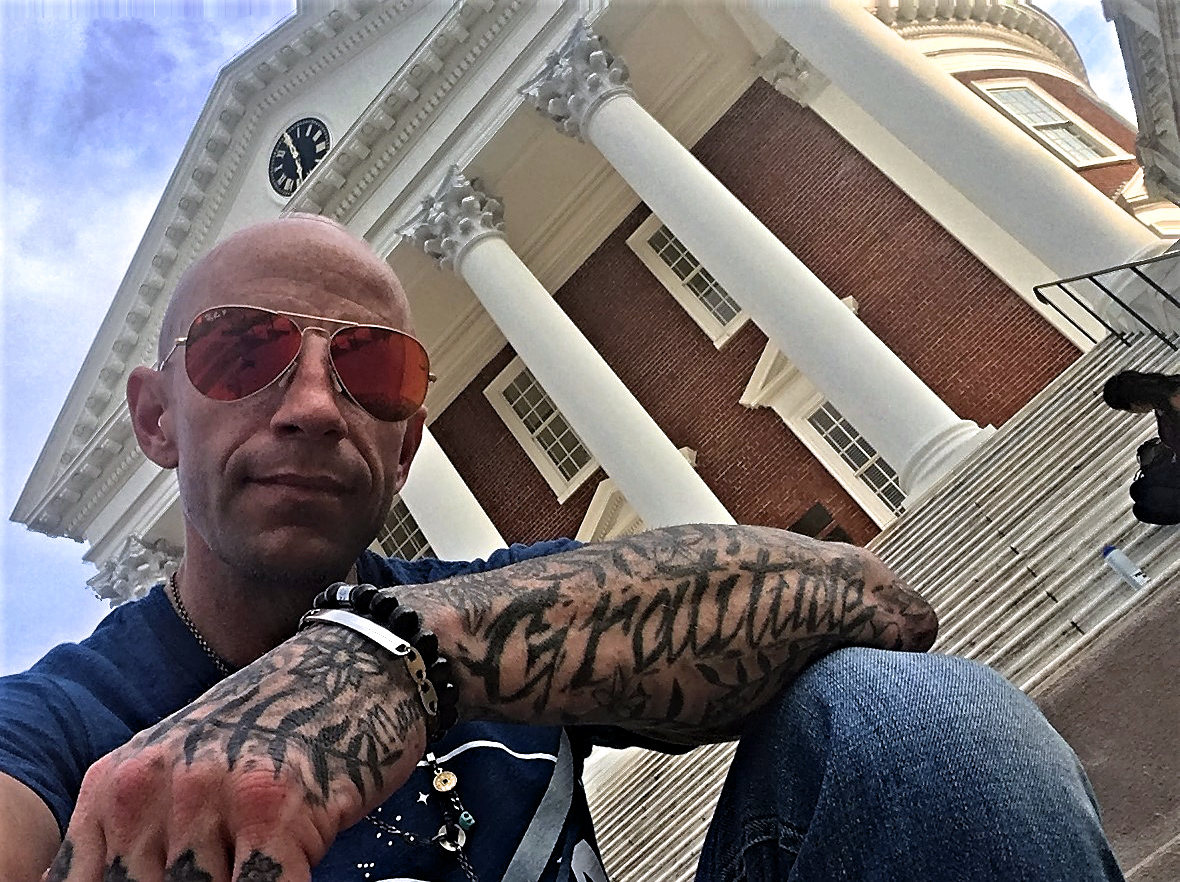 “When I did receive the news late that summer that I was accepted as one of the 16 initial cohorts for the program, I was ecstatically through the roof and over the moon,” Barry said. “My mind was blown and perplexed, as I was overwhelmed with feelings of gratitude, thanks, and appreciation. I, along with all my closest friends, systematically tried analyzing and understanding how me, the prior out-of-control, beyond the scope, riff-raff-related hooligan of all people, was fortunate enough to be so graciously awarded with such an opportunity. And honestly, [I] have just accepted it and [I will] just go with the flow and ride the wave to wherever it may go.”

Barry went on to say that, “at the time of this writing, I will be entering my final year of graduate school at California State University, Los Angeles for completion of a master’s in geography with a GIS focus. I work within the university part-time as a teacher’s assistant and graduate assistant, in which I instruct physical geography classes to undergraduates. Within the university student body organizations, I am the vice president of the Lambda Pi chapter of the Cal State, LA Gamma Theta Upsilon Geographic Honor Society, as well as president and Innovation Team lead and member of the Cal State, LA EcoCAR3 engineering team, North America’s premiere collegiate competition. GIS functionality is incorporated in an innovative way within the automobile as part of the four-year competition.”

“Last summer, I completed an internship at the NASA Jet Propulsion Laboratory working with the AIRS climate science division team doing statistical exploration and analysis on water vapor via time series analysis, inferential statistics, and hypothesis testing,” Barry said. “During the summer of 2017, I was fortunate enough to be offered another internship at the NASA Goddard Space Flight Center in Greenbelt, Maryland, where I worked with zonal time series analysis data of aerosols over both land and ocean using specific algorithms created by scientists from the Goddard facility. Upon returning back to school for my last year, I have additionally been offered an extended internship from September through May at NASA JPL in which I will conduct more research as well as be put on a publication trail, being that my research has been of [enough] significance … to submit for publication.”

“One of my goals regarding my work within NASA is to incorporate relative GIS research within the atmospheric sciences,” Barry continued. “In ArcGIS Pro this is now possible, albeit quite challenging, inasmuch [as] 3D climate data in HDF format can now be generated and visualized at different atmospheric levels. Most importantly though, the capability is now incorporated to perform on-the-fly geostatistical analysis and exploration, as an applicable means in which GIS statistical methods can be utilized in climate science research, as well as for publication. Upon my completion of graduate school, I plan to apply to … only one Ph.D. program (Columbia University) and allow the Universe to guide me from there, as it’s done effectively within this new academic chapter of my life. “

I asked Barry who has had the most influence on his career. He responded, “I would have to award that to our college department’s GIS guru Dr. Hong-Lie Qiu. Dr. Qiu goes way back to the very beginning and emergence with GIS, being highly knowledgeable in the subject and dynamically proficient in understanding the scope and underlying framework in which GIS concepts are built. One of the most important attributes I found within Dr. Qiu’s influence, is that he is always more than willing, at any time, [to help] students with guidance, support, and direction. Whether being his office hours or not, if Dr. Qiu is in his office, he’s available to take some time to help, explain, and assist students in need. This is rare, as [with most professors it is] most often only possible within given days and office hours posted.”

I asked Barry to share what projects he is the most proud of being a part. “I haven’t had much real-world GIS experience [as I am] still in school,” he replied. “However, the one I feel that contributes the most significant[ly] would be the current ongoing GIS project for the EcoCAR3 competition, [wherein] real-time signals emitted from the car can be interpreted with GIS analysis. There’s one more year left in the competition, so further details and results are still to come.”

When I asked Barry what his advice would be to new professionals in geography, GIS, or related fields, he said, “I’d never seen myself as anywhere near the smartest at any given time relative to academic subject matter. With that, the inspirations contained in this story should be evident, and have multiple avenues that can be related to by anyone of circumstance who, deep down, still has the desire, ambition, and motivation to succeed and/or better themselves. As I started to recognize my progress, I couldn’t help but remember the historically classic supportive comment that we’ve all heard from our parents and others: ‘You can do anything you want in life if you put your mind to it.’ I had never really absorbed that statement in its true meaning until my experience of opportunity was presented. When I did recognize this, it was of an utterly enlightening and profound fashion. Therefore, I deem it as an absolute and definitive truth, that yes, one can do whatever they want, if their mind is aligned properly with intent and integrity in doing so, appearing as if it’s a given Universal Law via proper framework of mind and attractor patterns. Stay ambitious, always maintain hope, maintain faith, maintain willingness, maintain courage and perseverance, and via Universal Law, one’s most appropriate successful path in life and of well-being will definitely manifest a path through essence, that will undoubtedly flower and unfold as one makes progression to whatsoever it is they desire.”

Barry closed with these words: “High hopes and positive frequency to all of you who aspire to attain that … which [is] inspiring in each of you, and with compassion and high appreciation of gratitude.” He added this quote: “Do be this or don’t be that, but ‘Just Be’”.

You can connect with Barry on Twitter at @SpatialDust and on LinkedIn as Barry S. Martinez.