In the fall of 2018, the U.S. Army Corps of Engineers – St. Louis District was in the process of developing plans and specifications for restoring a section of the Mississippi River levee to its 1973 grade location. To accomplish their goal, they needed to develop a detailed topographic map of the area, which, due to contract constraints, would have to be completed within 60 days of Notice to Proceed. The USACE tasked Surdex with completing the map under their existing IDIQ contract.

The project consisted of 12.5 linear miles of levee, covering an area of 4.3 square miles southwest of St. Joseph, Louisiana. To develop the construction plans and specifications for the relocation, the USACE required various datasets:

These datasets were to be combined into a consistent MicroStation 3D DGN file at a 1” = 200’ mapping scale with 1-foot contours. 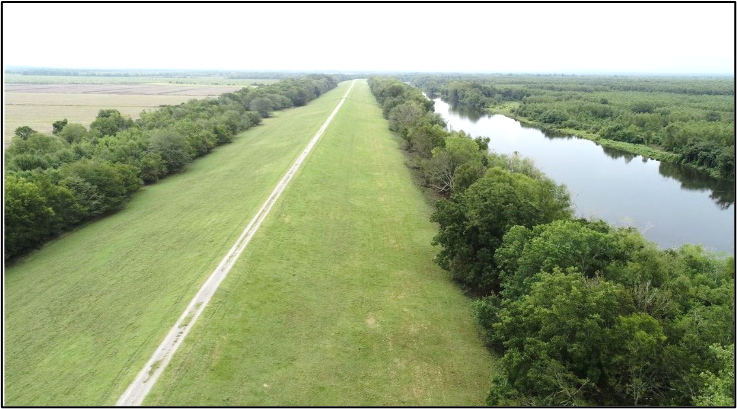 Based upon the survey data requirements, the initial project estimate included only conventional ground surveying techniques. However, upon review of the site—which consisted of the levee surface, farmland, drainage channels, ponds, and marshy wooded areas—it was discovered that neither the project budget nor schedule could be met if all the data items were produced by conventional ground surveying techniques. The topographic mapping portions alone would take several man-years of field work to complete.

Surdex recommended the use of aerial methods. They would obtain high-resolution digital imagery for the planimetric mapping, and high-density aerial lidar to derive the topographic data for the project. The lidar bare-earth topographic surface would then be enhanced with ground survey data to complete the 1-foot contours deliverable. Ground surveying would be used to collect profiles and as-built items, bathymetric data would be collected, and utility locates would be performed. This approach would enable them to meet the project specifications, as well as the budget and schedule constraints. 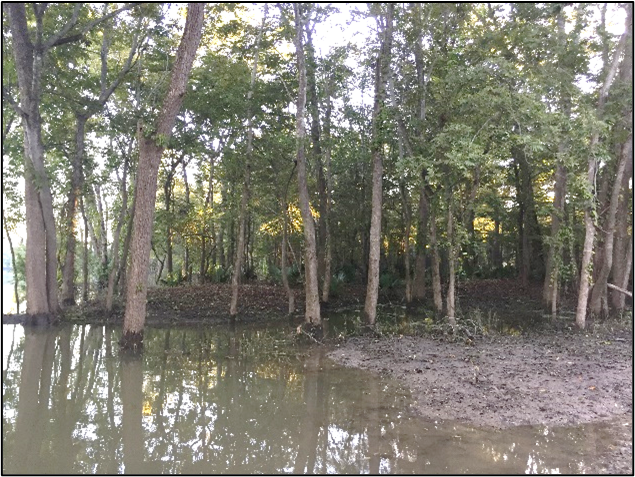 To complete the project quickly, Surdex teamed with Prairie Engineers, a multi-discipline small business consisting of engineers, surveyors and scientists that has supported Surdex on numerous mapping projects for the USACE. Notice to Proceed was issued on October 24, 2018, with a final delivery date of December 15, 2018. 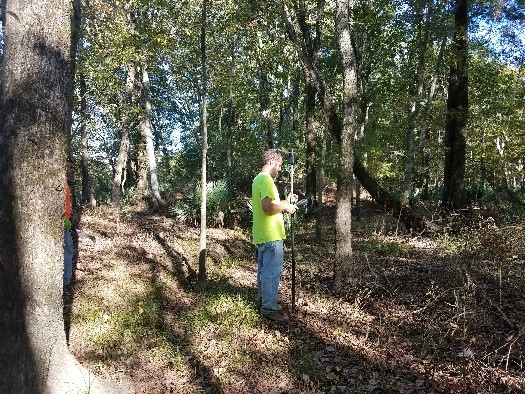 Aerial lidar was collected at 38 ppsm with an Optech Galaxy sensor system. To assure penetration through the vegetation, the site was flown twice in perpendicular flight directions. The lidar was calibrated to the ground survey points and classified to bare earth. From the bare-earth DTM, standing water polygons were delineated to identify areas requiring bathymetric survey. 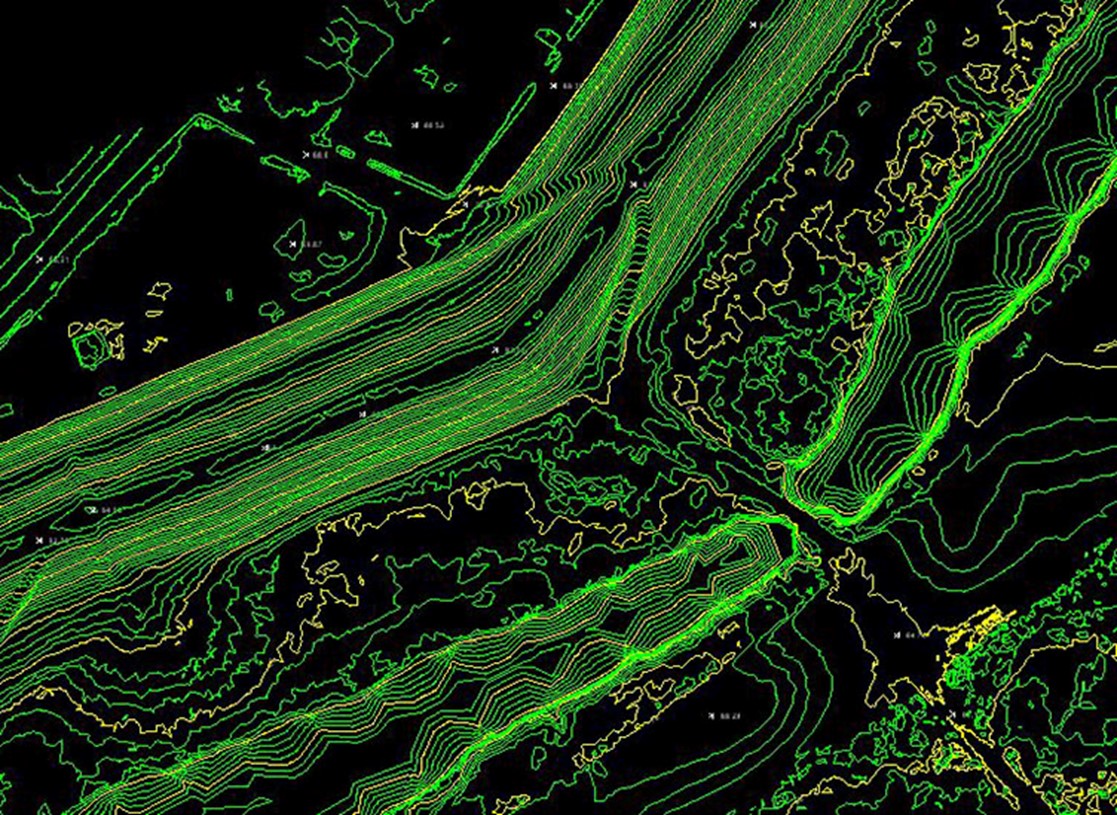 Prairie Engineers also completed both aerial and subsurface utility surveys, including surveys of horizontal locations of utility markers, visible evidence of above-ground utilities, aerial electric and communication lines and appurtenances and more than 15 miles of underground utilities. Additionally, locations of culverts throughout the project, including upstream and downstream flowlines, culvert size and material, and photographs documenting each culvert were collected.

The nature of the project site presented many challenges, including some not-so-friendly creatures along the way. Several alligators made a regular appearance during field surveys along with several species of snakes, feral hogs, and other local residents of the project site.

Within the project limits, there were more than 450 acres of open water typically inaccessible to manned survey vessels. Prairie Engineers completed surveys in these areas using a remote-controlled hydrographic survey vessel equipped with a single beam echosounder. Along 12 miles of borrow ponds adjacent to the existing levee and on large drainage ditches and several oxbows of the Mississippi River within the survey limits, surveyors deployed this tool to collect 100-foot interval hydrographic cross-sections to ensure complete surface model coverage of the project area. 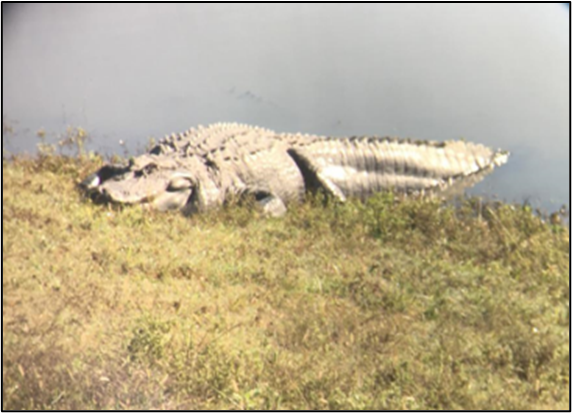 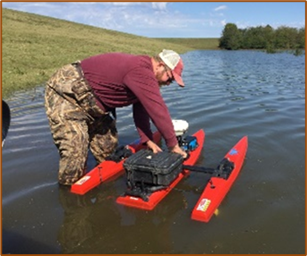 The final combined topographic map of the site was assembled by Surdex staff. The lidar bare-earth DTM was combined with the bathymetric elevations to create a project-wide continuous DTM surface. All field survey features and photogrammetrically-derived planimetric features were combined into the final MicroStation file. 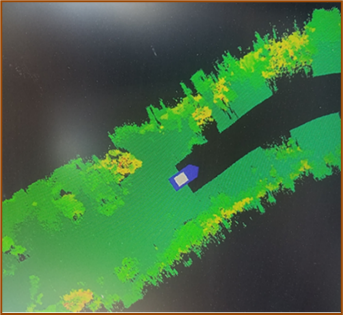 The Mississippi River remained at record levels through March of 2019. To work around this situation, Prairie Engineers utilized a multi-beam bathymetric sensor to collect bottom elevations over flooded terrain. These elevations were combined with the draft maps to create the final MicroStation files. Final deliverables were provided in May 2019 within the modified contract schedule.

Weather, flooding, water conditions, indigenous species, and the terrain posed significant difficulties for this project. By adapting to changing conditions, crews were able to alter data collection techniques and keep the project moving forward. These professional surveyors enabled this project to have a successful outcome.