Many Faiths, One World: The Geography of Religion

In recent articles I have written about the geography of food, water, sports and music, and how geospatial technologies and geographic methods are applied to these subjects — all of which have been essential components of the human experience since civilization first began and even before. Similarly, religion and spirituality are, and have been, ubiquitous elements of humanity.

In this article we’ll explore the fascinating geography of religion. For clarity and brevity, I’ll use the term religion to include all facets of belief in a world beyond what is tangible to our physical senses. Of course, these senses are part of this connection, as are material elements ranging from a drop of holy water or a vision quest rock stack, to the monumental architecture of the Mayan and Egyptian pyramids.

The material aspects of religion are far beyond the scope of this article. Instead, let’s explore the amazing realm of world religions and what they mean to so many elements of human existence. As universal as religion is, so is geography, and the two are symbiotically intertwined. There are countless religions and faiths spanning the world, and with limited space, this piece can only touch on a few examples. The mention or omission of any religion or faith does not imply any opinion of the author.

The Migration of Religion

Of course, there is no way to know when or where religion began, but we do know that as humanity spread across the globe, we took our beliefs with us. These journeys were sometimes short, and at other times, took hundreds of generations. Homo sapiens have proven to be incredibly adaptable, both to the physiographic setting as well as the cultural one, so beliefs and religion have changed over time in dogma and space.

As an undergraduate at Indiana University, I wrote a paper about the migration of Buddhism from India to China. (With all due modesty, I earned an A+, and I still have it in a box somewhere.) This was long before GIS and the internet became ubiquitous tools, so it was all text and paper maps. Since then, however, scholars have used GIS to map the centuries-long migration of this faith — one that has shaped the lives of billions of people.

As is the case with many web maps, this one on the spread of Buddhism can be difficult to digest at first, but once you dive in, it shows a fascinating story, illustrating many elements of this religion. It shows the routes the sects of Buddhism took to various countries, overlaying both space and time, and also, in a larger context, it shows how many different factors can be blended together so that individual stories create a much larger picture, spanning centuries. 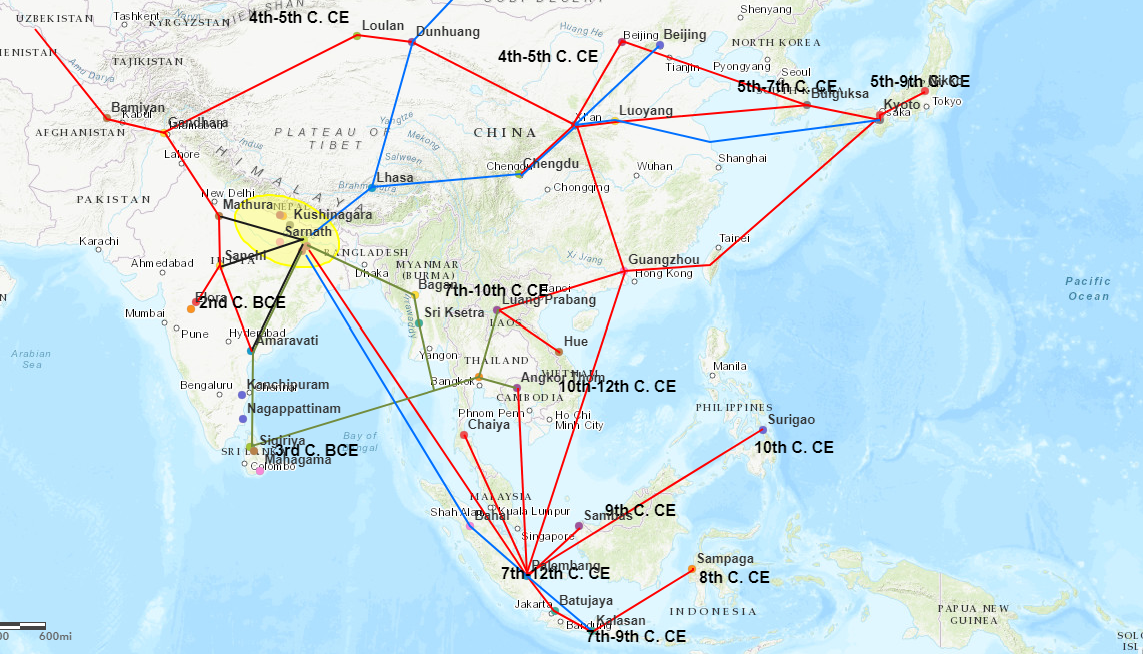 An interesting project at the University of Arizona, the Buddhist Geographical Information System, “… aims to digitally present data on Chinese Buddhism with the potential to extend the scope to include the entire Buddhist world in the future.” The site is a bit clunky to work with, but it offers downloadable data on temple sites, pilgrimages and other aspects of Buddhism’s vast geographic scope.

Religion, as one of the most defining elements of identity, binds people together in a common culture. Sadly, as much as religion has enriched humanity, it also has been a constant source of conflict across the globe. These conflicts have been, are now, and perhaps always will be significant elements of global geopolitics, shaping the lives of countless generations.

Every day we hear about religious conflicts on the news. One of the most enduring is that between the Jewish state of Israel and Islamic Palestine, a nation without a state of its own. Perhaps no religious conflict in the 20th and 21st centuries has affected American politics and interests as much as this one.

I was teaching “Geography of the Non-Western World,” (an admittedly outdated term) at Oregon State, and one of my students was confused about the Israeli-Palestinian conflict. A young exchange student from Asia, he asked, “But why do they fight so much? That place is so … it’s so small!” He was a political science major, so he raised his eyebrows and added, “There’s no oil there.”

This ongoing and incredibly complex conflict is described in a story map. Although it offers no resolutions, the story map illustrates the many religious and political factors that continue to drive conflict, not the least of which is use of the vast aquifer that lies under the West Bank of the Jordan River, as well as, of course, the claim to Jerusalem, which both faiths consider holy.

National Geographic has published a video series on the subject that uses interviews and maps to illustrate the complexity of life in the conflict zone.

Fortunately, there are people seeking peace. The Economic Cooperation Foundation, an Israeli think tank, has built an interactive database using Mapbox and OpenStreetMap. These are open source tools, and the site offers over a hundred downloadable maps and layers. Being open source, this site also offers editing opportunities to users who sign up for a group account. (Since I know nothing about the area, I chose not to contribute. That brings up the subject of ethics in GIS, especially in such a volatile milieu, which I will cover in a future article.)

Mapping Religion in the Classroom

Mapping religion in the classroom can be challenging regardless of grade level, as Martin W. Lewis explained in his enlightening GeoCurrents post, “Wikipedia, the Difficulties of Mapping World Religions, and a Most Bizarre Map.”

Why is it challenging?

There are many faiths and just as many ways to map them.

In the dynamic 21st century, people are moving more rapidly than ever before, often due to conflict, but also, opportunities, so collecting empirical data can be difficult.

There are also issues of scale and measurement units. The majority religion in one country may be only 51%, and national boundaries, such as many in Africa, were redrawn by colonial powers without regard for previous allegiances.

Also, exactly what defines a religion? Islam and Christianity, for example, each have multiple belief systems, so simply lumping them together can be unintentionally misleading.

Nevertheless, there are excellent map resources for showing religion across the nation and globe. Lewis found a map on Wikipedia that shows a more nuanced picture, with religions defined by region rather than country. However, even the more basic maps can be an introduction to the big picture.

For decades, the CIA has been compiling and publishing demographic and geopolitical data in a variety of forms, both tabular and spatial, in The World Factbook. These data have been used for countless projects by many organizations, from humanitarian agencies to national defense (and sometimes national offense).

From Bahai to Zoroastrianism and from Afghanistan to Zimbabwe, The World Factbook offers comprehensive data sets on the world’s religions, country by country, and these data are integrated into many online maps. One example is a basic AGOL map showing the world’s religions by country, which is an excellent classroom tool to show the global distribution of religion as it exists now, albeit at a coarse scale.

These maps illustrate the diversity of beliefs, and, obviously, spatial patterns will become evident. Africa is primarily Muslim in the north and Christian in the south, while Buddhism is most prevalent in East Asia. Judaism is concentrated primarily in Israel, but the geographic scope of one particular faith may not reflect its importance on the global stage, as discussed above.

At a national scale, there are several resources available. Although outdated (2003), GIS Lounge has a Map Gallery of Religion in the United States. However, the data are mostly based on self-reporting, so this is another example of always vetting your sources and making metadata. They are really nice maps though, and do reveal interesting spatial patterns.

The National Geospatial-Intelligence Agency has an interactive map that includes religious data down to the provincial level. The public-facing site is clunky, and primarily attribute-based, but it does have useful information that students could mine.

Few of us are likely involved in geopolitical analysis and intelligence, and while demographic and religious data are critical to conflict resolution, they may seem esoteric to our daily lives. However, an understanding of the vast scope and diversity of this embedded and possibly timeless part of the human story is critical to understanding the world. We have the power, and thus the responsibility, to share this knowledge. Regardless of faith, we are still the same species, and we all share the same world.