Engineering surveyor Danie Roelvert is a strong believer in one particular guiding principle: what is yours will come to you when it’s ready. And after 15 years of employment with a South African survey company and months of contemplating a different career path, Roelvert felt the time was right to “fly on his own.”

“I felt I’d reached a ceiling in the company and needed to pursue something different,” Roelvert said. “I considered starting my own business, but it didn’t feel like the right move at the time, so I pursued other opportunities. When those either didn’t work out or didn’t feel right, I took that as a sign that I was supposed to take a chance on my own venture. I’m so glad I listened.”

On April 1, 2020, Roelvert officially launched his own company, PinPoint 3D, based in Pretoria, South Africa. Coincidentally, that was around the time that the country issued a level 5 COVID-19 lockdown –– the strictest shutdown possible. Despite the unfortunate timing, Roelvert has not only found success in providing laser scanning and surveying services, he’s created a niche ship-scanning application in Africa, delivering 3D imaging to ship owners who need to retrofit equipment and comply with new mandates for ballast water treatment systems.

In September 2017, a treaty adopted by the United Nation’s International Maritime Organization to help prevent the spread of potentially harmful aquatic organisms and pathogens in ships' ballast water became a reality. Under the order, ships must manage their ballast water so that aquatic organisms and pathogens are removed or rendered harmless before the ballast water is released into a new location –– marine protection that will help prevent the spread of invasive species as well as potentially harmful pathogens.

For the shipping industry, that means most ships will need to install special equipment to treat the ballast water. Although phased in over time, all individual ships that meet the treaty’s vessel eligibility must be fitted with the required treatment system by September 2024. And that has buoyed Roelvert’s burgeoning business with ample opportunities. 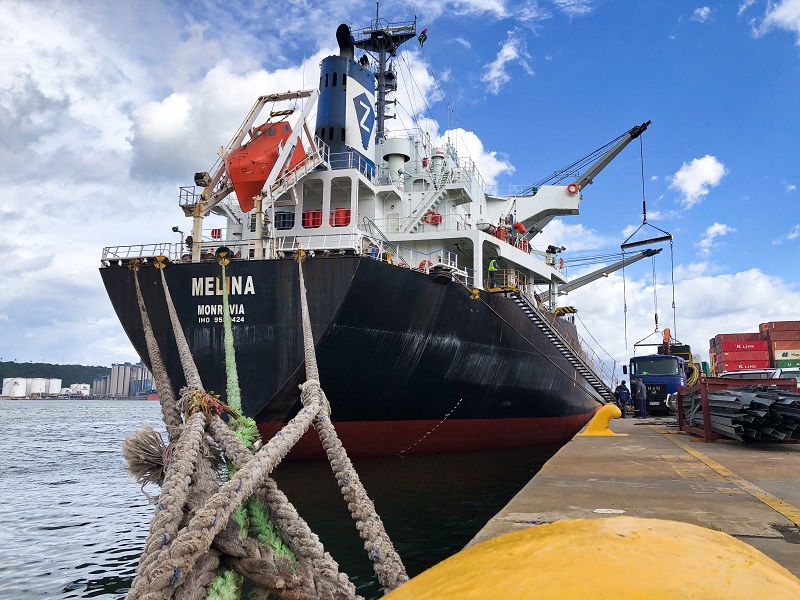 “Laser scanning is the perfect and only answer to this problem,” said Roelvert. “Ships are in port for a limited time so you need to work efficiently and ensure you collect everything the client needs because you don’t have another opportunity to rescan once the ship sets sail. The speed, versatility and data density of laser scanning enables you to quickly set up in cramped spaces and capture the fine, detailed elements of entire engine or pump rooms in a few hours. With that virtual environment, designers can place pipes exactly where they need and ensure they’ll tie together.”

Roelvert got his first ship-scanning opportunity five months after South Africa’s first lockdown was lifted, and he was undeniably giddy.

“I love ships,” he said. “They’re so majestic. The engineering is awesome. I’ve always wanted to go to the engine room and see how it works. So when I got a call from a guy who said he found my name online and had a client who needed a ship scanned in a South African port in Saldanha, I said, ‘I can absolutely do it’ even though I’d never done it before. I provided 89 as-found scans for new design work and it was amazing. First time in the engine room, meeting the captain, and seeing how everything works. It was a dream come true.”

Roelvert is typically given only a few days warning from operators who need vessels scanned, so he needs to be ready to work at a moment’s notice. Marine architects and designers provide him with drawings of the ship’s layout and circle in red the specific areas or pieces of equipment they want scanned. Then, it’s Roelvert’s job to figure out how to capture that information to create one complete model of the entire area of interest.

Since that first ship-scanning assignment, Roelvert has scanned several more ships in South Africa and West Africa, including an offshore fuel tanker in Togo, which challenged his motion sickness vulnerabilities, and a bulk carrier in the South African port of Durban, which tested his technical skills. The various assignments have given him the opportunity to utilize different scanners for different jobs, experience that has helped him determine which technology best suits his business.

“The Trimble X7 is the best all-rounder scanner,” Roelvert said. “It has speed, good quality data, efficiency, and most importantly, versatility. I want to be able to put it in a backpack and fly off, and the X7 is perfect for that. Its on-site registration is incredibly valuable and saves me significant time. And its software solutions enable me to load project data such as a design file, and after scanning a particular asset, I can immediately see if that planned equipment will fit or if there are obstructions that might be a problem. That data depth is really valuable for the client.”

For the Durban project in April 2021, Roelvert was tasked with scanning six areas of interest across three decks of the engine and control rooms of the Melina, a 28,000-ton bulk carrier. Of critical importance was capturing specific flange positions and connecting pipes targeted for replacement.

“Because you’re in a confined and congested space, you can easily not capture enough detail on the important elements,” he said. “The scanner’s in-field registration option ensures that I capture all the important pipes, flanges, and pumps, which is critical for clients because parts are pre-fabricated while the ship is in transit and then installed at its next port. So if data is inaccurate, that can be costly.”

Roelvert started on the lowest deck of the engine room and worked his way up, mindful of the sway of the ship and the heat of the room. He positioned the scanner to capture both the particular elements highlighted by the client and an extended boundary for proper scan overlap. For each set up, he collected a full-color scan and a set of corresponding photos in about two minutes –– a few scans requiring exceptional detail took four minutes. After each scan, he reviewed the 3D image using Trimble Perspective software on his T10 tablet to confirm that he clearly recorded the important assets positions and that there was enough overlap to connect scans together. Within six hours, Roelvert captured 82 scans with data quality that was well within precision requirements. 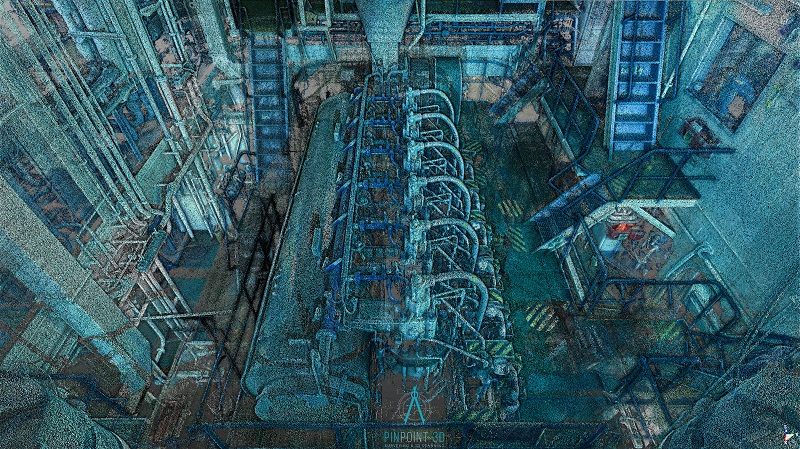 Roelvert appreciated the compactness of the Trimble X7 to nimbly move around to scan the Melina’s engine room.

“Clients typically require density and accuracy specifications relevant to a particular scanner that has become popular for engine rooms,” said Roelvert. “With that scanner, it takes about 5.5 minutes per set up for a color scan. With the X7, the same density and quality of data requires about 2.5 minutes set up. So it saves you a lot of time and I get more data detail.”

Although Roelvert said final registration and refinement can be done on a tablet on site with the X7, he prefers to post-process the data using Trimble RealWorks, a software solution specifically designed for point cloud processing and analysis. Having loaded his registered scans into the software, he used automated cleaning tools to eliminate any extraneous noise, and then rendered the 3D dataset into a complete colorized model of the ship’s engine room and control room.

“I won’t use any software other than RealWorks for post processing scanning data,” said Roelvert. “It’s clean up and registration tools are excellent and it renders data beautifully. I actually look forward to processing data with it.” 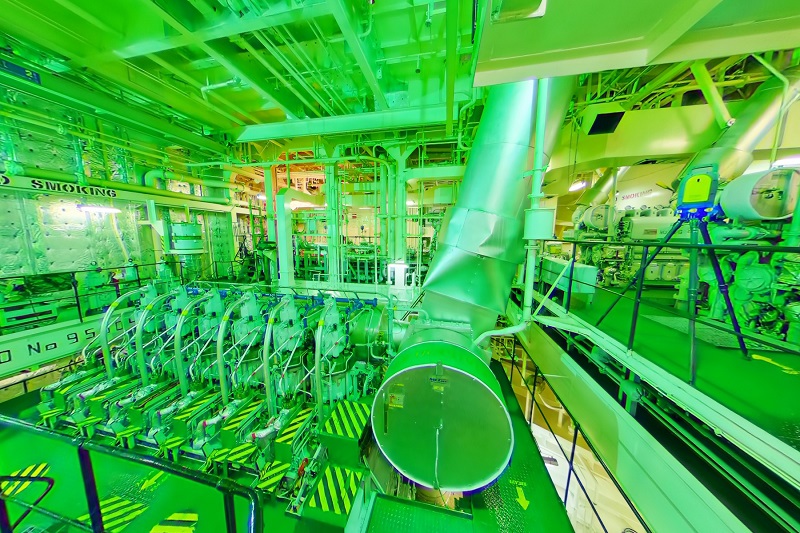 Off the ships, Roelvert has taken the X7 on other projects to further experiment with the technology. Last October, for example, he used the laser scanner for an excavation project in the Johannesburg Central Business District. After demolishing a building and excavating 30 meters down, crews inserted piling on the sides for reinforcement. Roelvert’s client needed to know how much available space there was for underground parking and other elements.

He set up at the bottom and collected full dome scans of all sides of the open space. Then, he elevated a tripod about 3 meters high and set the scanner on top to capture the surface. In one hour, he acquired 12 full color scans.

Although Roelvert welcomes all the new opportunities that continue to come his way, he feels most fortunate that he can combine his two passions — ships and laser scanning — and make a living from it.

For Roelvert, timing has indeed been everything.