Into the Unknown: The Geography of Exploration

Like all animals, humans have an instinctual drive to travel and explore the world. Many species, such as salmon and panda, can only survive in specific habitats — cold water and bamboo forests, respectively. Others, like pronghorn antelope and monarch butterflies, will travel hundreds or even thousands of miles in a single year.

Homo sapiens are in between these extremes. We live on artic tundra and rain-swollen tropical forests, searing deserts and frozen mountains, and vast continents and isolated islands, because of our ability to not only adapt to the environment but to change our environment as well.

Unlike plants and animals, we are not driven by instinct but consciousness, which leads to curiosity. What lies beyond that mountain range? Is there land beyond the oceanic horizon? Where does this continent end and begin? In this article, we’ll explore human exploration from prehistoric times to now.

When Did Exploration Begin?

Prehistoric humanity colonized most of the globe in just a few hundred thousand years, a blip in geologic time. I discussed this in several previous articles on archaeology, ocean mapping and movement, so I’ll only do a short recap. Some of the evidence is in archaeological records, some is in oral tradition, and some is in written records and architecture.

By land and sea, we discovered ways to navigate our earth, using the stars, sun and moon, and tidal and wind patterns. Even without modern instruments — not even the compass — we spread across the planet. We founded civilizations on every continent except Antarctica, but even that has a human presence now.

The Age of Exploration!

As we’ve seen, all of human history has been an age of exploration, but the modern usage of the term refers to the many voyages that began in the 15th century. Across the globe, nations were discovering new ways to navigate and explore. China sent out its enormous treasure fleets to make contact with the civilizations of Arabia, South Asia and East Africa, as illustrated in but one of many interactive maps. Another map allows users to select specific voyages.

Heading from the opposite direction, Portugal was sending out ships to reach the same place, the Indian Ocean littoral, shown in many maps. One that was created with Google My Maps shows a single voyage, illustrating how vast even a single mission could be.

These expeditions, as well as those of Oman, Britain, Spain, India, Italy and many others, connected far-flung civilizations with each other. The vastness of these expeditions is well beyond the scope of this article. In fact, each expedition likely has its own book, but many are brought to life in two books of the same name: “Into the Unknown.” One is by Stewart Ross; the second, by authors Matthew A. Henson, Jacob Bull and Bernadine Bailey.

From Trade to Taxonomy

These early seafaring expeditions connected diverse cultures, leading to the global economy on which we depend every day. They led to advances in cartography, navigation, oceanic physiography and metrology, mapping coastlines, currents, weather patterns and cities. However, their primary endeavor was commerce. In the 17th through 18th centuries, Europe was in what is called the Age of Enlightenment, during which the scientific and philosophical advances of the Renaissance were permeating into middle and upper-class life, including the scientific world.

Several famous expeditions were launched during this time, all of which have built the social, natural and political world in which we live today. Instead of seeking to get rich, explorers set out to not only map new places and meet new people but also to measure and study the natural and cultural elements that made up all of these places. Along with traders and conquerors, scientists and diplomats now joined the ranks of explorers.

There are far too many to discuss here, many of them failures (some epic, others amateur), but several of the most famous and successful ones have resulted in excellent digital maps and data that can be used in the classroom or for research. So, in reverse chronological order…

As a 22-year old naturalist aboard the HMS Beagle, Charles Darwin sailed around the world from 1831-1836 recording observations of plants and animals that led to his theory of evolution and natural selection. National Geographic has an excellent exercise, and there are many other animated and interactive maps, such as this one that shows the voyage in both space and time.

Decades before Darwin, the United States, in order to expand its territory, purchased an enormous and unmapped piece of North America from France, so that Napoleon could fund his European wars. (Of course, people had been living there for thousands of years already.) Thus was formed the Corps of Discovery, which, with federal funds, explored what was called the Louisiana Purchase. From St. Louis to the Pacific and back, Lewis and Clark mapped, identified and collected thousands of specimens of flora and fauna during their 8,300 mile, 2-year journey. The National Park Service offers a sampling of their botanical findings in a story map. There are also downloadable data and lesson plans from the Utah Education Network.

While all of the expeditions discussed so far were arduous and dangerous, none compare to Alexander von Humboldt’s expeditions in South America. Without government support, he traversed 6,000 miles, hiring local Indian guides and buying supplies, canoes and mules along the way, going from flooded forests to the peaks of the Andes. At every opportunity he took celestial measurements, gathered samples of flora and fauna, made geologic maps, and learned the cultures and languages of the natives who helped him.

There is a fantastic lesson on creating a 3D animation from Esri, and Deutsche Welle offers a summary of the expedition as well as some interesting (though static) maps. Humboldt’s perseverance, meticulous records and insight changed science forever.

When Does the Modern Age Begin?

The Age of Enlightenment expeditions described above led to further exploration across the globe in the next century and a half, mainly by European powers, particularly Great Britain. They launched expeditions between 1856 and 1877 to find the source of the Nile and the South Pole. Unfortunately, the Norwegian Roald Amundsen beat them to it. There are a number of great story maps describing these and other subsequent expeditions and also downloadable data.

Americans were busy as well. In 1869, John Wesley Powell became the first Euro-American to explore the entire Grand Canyon — with only one arm and ten men in wooden dories! The story map of his expedition by the USGS tells the story using historical narrative as well as remote sensing imagery, including Landsat, Sentinel, NAIP and others, adding a new perspective on Powell’s epic saga, with many detailed anecdotes. Like Humboldt, Powell’s multi-faceted data collection, as well as his endurance and leadership, shaped scientific and political perspectives for generations. 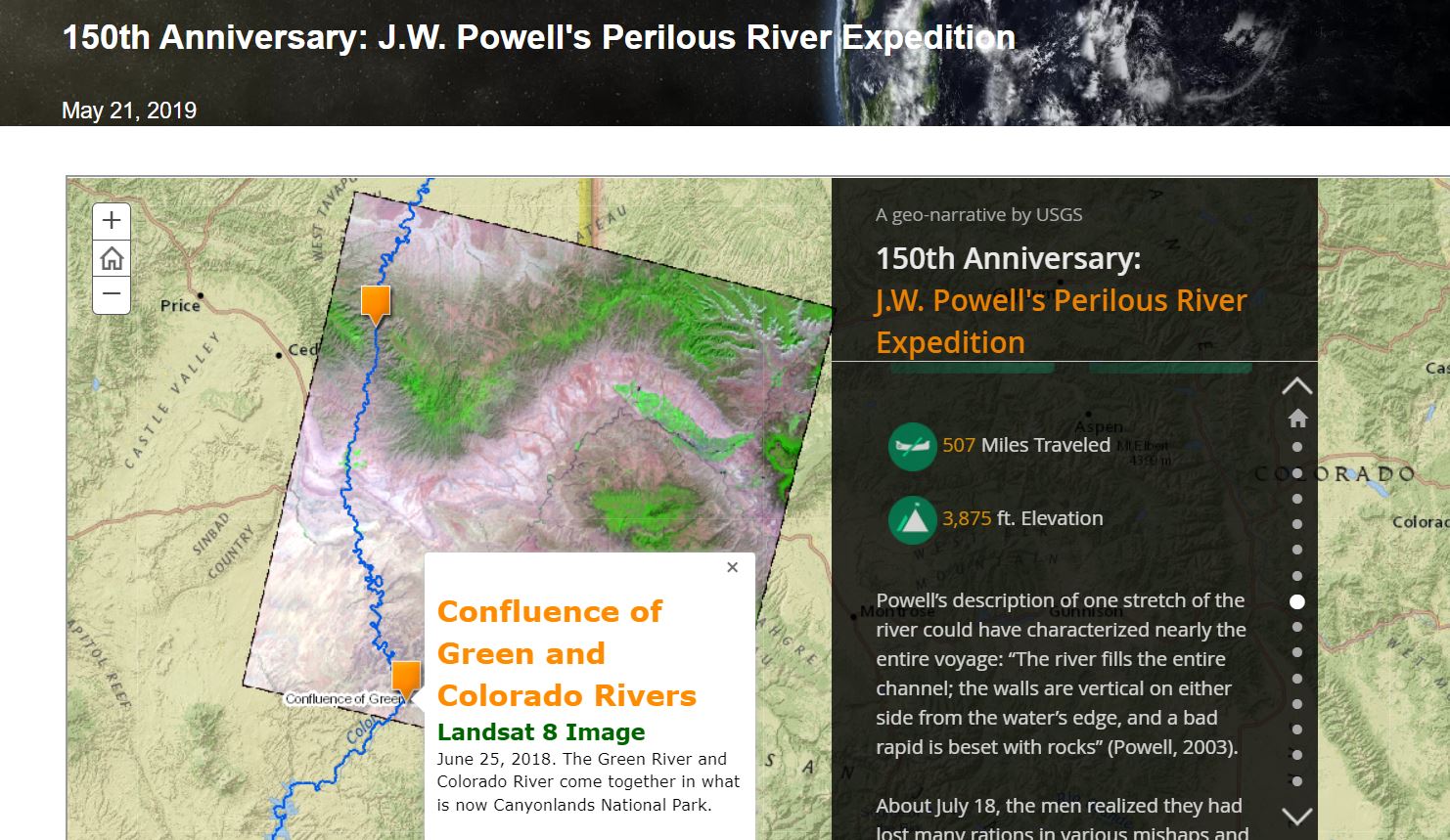 The sun never sets on the British Empire! After winning the Great War in 1918, Britain was the first global superpower, and with the commerce, industry and science of the last decades, set out on more expeditions, including Shackleton’s disastrously famous voyage to the Ross Sea in the Antarctic in 1915.

However, this “heroic failure” paved the way for future expeditions, including that of the Discovery Investigations, a series of expeditions to the Southern Oceans from 1925 to 1951. The investigations included a marine laboratory on South Georgia Island, the sailing ship RRS William Scoresby, and data collected by remote teams.

Hundreds of data points were described and mapped, as shown in this story map. The pop-ups are very dense, each with dozens of records, including the whole Kingdom-Phylum-Class-Order-Family-Genus-Species taxonomy. Obviously not all are complete, since some observations were taken from great distances, in terrible weather, or were only momentary observations.

What Lies Over the Next Horizon?

At the Esri conferences in San Diego in 2001 and 2003, we were privileged to have two global explorers as our keynotes, J. Michael Fay and Peter Hillary, respectively. Both shared experiences of their epic explorations, showing that the past continues into the present.

J. Michael Fay described his “Megatransect” across Africa of 15 months, during which he and his team collected thousands of GPS points and thousands of data observations. Peter Hillary, son of Edmund Hillary, who made the first documented summit of Mt. Everest with Tenzing Norgay, spoke of his own expeditions to that summit. (He never took a single breath during his talk!)

Adventure Is Where You Find It!

Researching these expeditions made me feel small. But then, I realized we are all explorers in our own right. If we lead a classroom program or help field crews with their GPS, we are doing what they did. We will never run out of places, people and things to map. Map on!