Flying High and Landing Safely: a history of aeronautical mapping

On an October Monday night, I arrived just in time for class, dirty and unshaven, with my backpack over my shoulder. "Sorry I'm so scruffy, but I just flew in from the Grand Canyon," I explained to my students. Dramatic pause... "And boy are my arms tired!" Bud-ump-bump!

At the time, I was too wired and too tired to realize the gravity of what I just said. At 7 a.m., I was at the bottom of the Grand Canyon. Then, at 6 p.m., I was in my classroom in Seattle, thanks to the amazing air travel infrastructure in the U.S.

That journey back took me first to the Grand Canyon Regional Airport (after the seven-mile hike), where a small plane flew me and a cadre of Japanese exchange students to the Clark County airport in Las Vegas. From there, it was a shuttle to McCarran International Airport, then, non-stop to Sea-Tac Airport, then, a taxi ride to the University of Washington campus.

I don’t fly as much I used to, but when I do, I am always amazed at how effectively our civilian and military aviation system works, both in our vast beautiful nation and also around the world. In this article, we’ll explore some of the many ways that both geospatial technologies and analog mapping have shaped what is arguably the safest and fastest mode of travel in the world.

From Kitty Hawk to the South Seas and Beyond

Although Chinese kites, French balloons and biplane gliders had been deployed for centuries, powered modern flight began in 1903 with the Wright brothers’ launch at Kitty Hawk, North Carolina. After the Wrights proved that it could be done, and Orville landed safely, aviation development took off (yes, pun intended). Although the flight lasted only 12 seconds and achieved a top speed of 6.8 MPH, the foundation was laid for exponential progress.

With many human endeavors, our capacity to develop technology often exceeds our ability to use it wisely or safely, and aviation is no exception. Once motorized flight was shown to be possible, its deployment became manifold in many utilitarian areas, such as mail delivery, as shown in this rich database that links to hundreds of aviation charts housed by the Library of Congress.

As horrible as it is, there is nothing like a war to spur technological advancement. During the Great War, or as we call it now, World War I, airplanes and crews proved that they could not only be used for transportation but also for reconnaissance and combat. While “dogfights” between individual planes were common and, often, glamorized (think Snoopy and the Red Baron), they had little effect on the war, which was fought mostly on the ground by millions of soldiers. However, the airplane revolutionized aerial photography. The war was the first implementation of large-scale aerial surveillance, which had a much greater impact than aerial combat.

After the Great War, airplanes were proven to be reliable and relatively safe, which began the first wave of commercial air traffic as well as the first wave of aerial adventurism, with Charles Lindburgh and Amelia Earhart, among others, making unprecedented long-distance flights.

From Arizona to the FAA

As I mentioned in a previous article, one of my favorite atlases is a young lady’s atlas that was also her diary, rich with annotations. On one page showing Arizona is written “Mid-air collision, June 30, 1956.” Due to unpredictable weather and lack of communication, two passenger airliners collided above the Grand Canyon, and 178 people died, both passengers and crew. There were no survivors.

Unfortunately, it often takes a terrible tragedy to spur action. After WWII, the aviation industry was thriving, with new technology, a well-trained workforce, experienced pilots and a prosperous economy. Along with our allies, we had just saved the world from tyranny, and our air power was critical in that endeavor. (Full disclosure: my grandfather was a bomber pilot in the Pacific theater.)

In those days, there was no centralized system for monitoring air traffic. Pilots were in communication with their departure and arrival airports but rarely with each other. They relied primarily on visual navigation, as radar was still nascent, and satellite weather had yet to be invented. The pilot and crew essentially determined their own flight path without communication with, or knowledge of, other planes’ locations.

Thus was born the Federal Aviation Administration in 1958. Now all flight paths, commercial, military and private, are predetermined, and any changes due to weather or other factors are cleared through a central system. Serving on a hand-crew on a fire in Montana, we were helicoptered to the fire site. Being a mere grunt, I had no idea where we were, nor why it took so long for “the bird” to land and take off. Only years later, when I was building aviation maps, did I realize how critical flight plans were, so we didn’t crash into another helicopter, tanker or recon plane.

It may seem like a big space up there, but as the 1956 incident illustrates, it can also be very close quarters. As many times as I have gnashed my teeth waiting for a delayed flight to depart or get to the gate, I remind myself, better safe than sorry.

Again, war can bring benefits. After WWII and Korea, there was a rich cadre of aviators and cartographers who had learned from experience the nuances of air travel.

We Don’t Use Maps, We Use Charts!

One joke that was passed around fire camp, as we were making aviation maps for each incident, was, “How many pilots does it take to change a light bulb?” Answer: “Just one. They hold the bulb, and the world revolves around them.” For obvious reasons, aviators are quite particular about their maps. A bad map could mean dropping retardant on a ground crew, or smokejumpers parachuting miles away from their intended drop point.

I interviewed a friend and colleague who is both a GIS geek and a pilot, and he told me about the evolution of aviation technology. He only does short flights at low altitudes and low speeds. When we lived in the rural town of Glide, Oregon, there was a small airstrip and a community of small plane pilots, including Major General Marion Carl, a legendary Marine Corps pilot.

Although I have flown on many commercial flights, I have never been on such small planes, so I had to query my friend about the tools they use for navigation. Keith explained that in the pre-digital days, the crew (or pilot on private craft) would haul bags of charts, documents and instruments, called “flight bags,” that could weigh up to forty pounds.

Although I am not a pilot, I own a few of these charts, mainly for the cartography and the novelty. Overlaid on the familiar terrestrial landscape, they are first bewildering but, then, become very engaging as we begin to see everything going on above our heads, and realize that the many aircraft we hear and see every day — commercial, military, private — are following these charts. 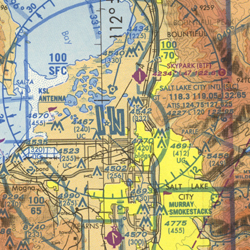 The development of these charts is discussed at length in an article by escape-maps, and the history is far too complex to discuss in this short article. Before the standardized chart was developed, with its standard format and symbology, pilots used whatever maps they could — nautical charts, USGS maps, etc. — but all were terrestrial or nautical and had no aeronautical information.

These modern charts were available as paper “strip maps” along standard routes, and are now available digitally as downloadable PDFs and individual layers in different formats with a more rectilinear format, akin to the USGS quad map, at 1:500,000 scale.

Since the paper chart days, aviators have embraced digital technology. (This is why we don’t use wireless in flight.) Not only is communication faster and more reliable, it is more efficient. One app that Keith and other pilots use is Boeing’s ForeFlight. This iOS app offers features such as runway analysis, hazard analysis, weather reports, temporary flight restrictions (such as a wildland fire incident) and others.

Another tool that private pilots use is Garmin Flight, which has downloadable geographic databases for mobile apps and, for the desktop, customizable base layers. Garmin also offers smart watches that are a hybrid of analog and digital, which can monitor numerous variables from a pilot’s heart rate to cabin pressure, along with altitude and geographic coordinates.

Were humans ever meant to reach the skies and beyond? We are heavier than air, have no wings and longingly gaze at eagles and geese and hummingbirds that effortlessly move in three dimensions. The tale of Icarus in Greek mythology warned of the dangers of humans flying, yet, somehow, we have overcome these obstacles and have learned to build wings that will carry us across the globe, to the moon and even beyond. Houston, we have ignition!