What's the Deal With the LightSquared / GPS Clash?

If you are a precision GPS user, and you haven’t had your head in the sand for the past few months, then you are probably aware of the current clash between fledgling 4G network, LightSquared, and the GPS community. To be honest, I have done a lot of listening to people’s rants up to this point, and have just recently started my own little research project regarding this situation.

Is there really an issue?

I’m a hard sell when it comes to these sorts of things. I decided to watch the on demand webinar from GPSWorld, LightSquared and GPS: Our Story So Far, to better grasp the magnitude of this situation from a GPS industry standpoint. Panelists in this webinar broke it down, plain and simple. You can’t argue with physics. LightSquared intends to broadcast a terrestrial signal in the L-Band frequencies (1525Mhz-1559Mhz) for its 4G network. GPS and other GNSS frequencies are adjacent to the L-Band frequencies (1559Mhz-1610Mhz). This adjacency can be problematic, but it is not the only culprit-- any receiver that is yielding at least sub-meter accuracy will have a “wide band” intake of radio frequency that is susceptible to receive signals +/-25Mhz outside of its spectrum by design. That means that the radio on a precision GPS unit is more prone to be jammed by adjacent signals. This propensity is compounded by another fact; the anticipated power of 1,500 watts of LightSquared’s ground stations will most certainly drown out GPS’s at-most 50-watt broadcast that must travel 12,000 miles to reach earth. There will be interference; there is no doubt about it. The graph below (courtesy of John Deere) explains the aforementioned concepts pretty well. (Click for larger view.) 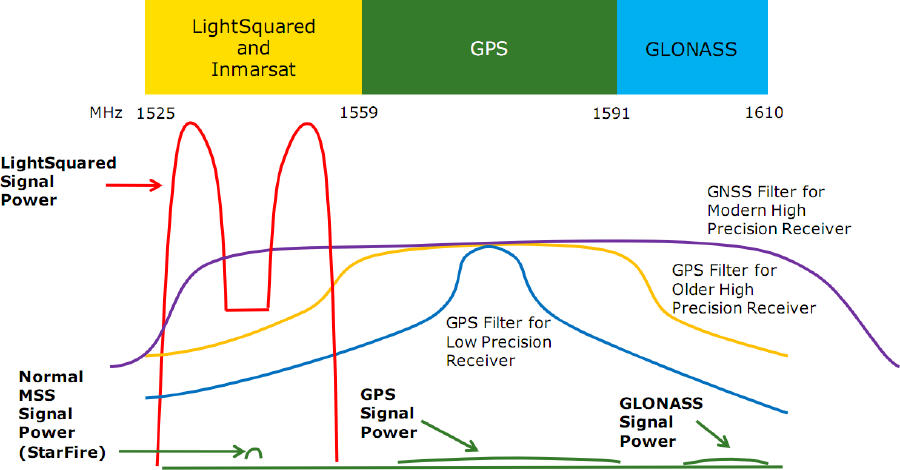 In essence, modern-day, high precision GNSS receivers will absolutely be affected by this broadcast. You can’t argue around the physics of it. Not only that, but the GPS units that also use Starfire and Omnistar (a huge portion of agricultural GPS applications) will have extreme difficulty given the proposed signal power of LightSquared’s broadcast, as they solely occupy the MSS spectrum, at ~1537Mhz and ~1557Mhz respectively.

How it was done

LightSquared was not originally licensed for terrestrial broadcast of its spectrum; it was originally licensed for satellite broadcast. However, the FCC granted it a waiver to apportion its spectrum for terrestrial use via a loophole that allows a satellite ISP to use ground stations to fill in gaps in its network, known as an Auxiliary Terrestrial Component (ATC). The original intent of the ATC clause was for auxiliary use only (hence the name “auxiliary”). From what LightSquared is proposing, the terrestrial component would be used as its primary means of broadcast.

To even attempt to grasp how LightSquared was able to achieve a deal such as this, you need to delve deep and examine the players at work here. LightSquared is a privately held company that is part of the hedge fund, Harbinger Capital Group, managed by Philip Falcone, which resembles more of a wireless holdings company than a hedge fund. LightSquared was formed in late 2010.

I’ll point you to an article by Ken Boehm, chairman of the National Legal and Policy Center, a conservative watchdog organization. It draws conclusions on how this waiver was probably fast-tracked through the FCC. The bottom line is that LightSquared has a green light to roll out its network, right? Not really. It is conditionally approved at this time due to just barely “in-time” red tape. It is currently working with the GPS industry and will submit a report that might absolve it of interference issues on or by June 15th.

1. Investors and employees are trying to pull out (or have already) (via Reuters). Back in January, on the heels of the conditional waiver from the FCC, some high profile investment professionals left Harbinger Capital Group (LightSquared holding company) over fears that the fund had too many “eggs” in the LightSquared basket.

2. LightSquared is burning through $100 million per quarter (via TMF Associates), when it hasn’t even put hammer to nail on a terrestrial infrastructure build-out.

3. Nokia-Siemens Networks scored the largest order ever placed for telecom gear (totaling $7 billion) from - you guessed it - LightSquared in July 2010 (via Reuters).

4. Fast-forward to March 2011. LightSquared cuts a deal to partner with Sprint for a 3G backbone, and decides to cancel “the largest order ever placed for telecom gear” in favor of a partnership with Sprint’s preferred hardware vendors, Alcatel-Lucent, Ericsson and Samsung (via Fiercewireless). LightSquared strikes a deal with Best Buy for its retail front. March 2011 - the success of this “inked” deal is still contingent on the network build-out.

6. LightSquared hints at an upcoming IPO in summer 2011. Now you, too, will soon have a chance to own a stake. Are you sure you want to invest (via Tradingstocks.me)?

7. In an April 29th statement, Philip Falcone, president of Harbinger Capital Group, announced to shareholders that regulators are investigating the firm on at least five matters (via Business Insider)—including but not limited to market manipulation, short selling stock violations, and personal loans made from Harbinger Capital to Philip Falcone to pay off his own personal tax bill.

As consumers of wireless services, we benefit from competition. In the face of the potential $38 billion absorption of T-Mobile by AT&T, I really want another dog in this fight … just not like this. LightSquared is an extremely busy company. It has been inking deals all over the place and in the case of the Nokia-Siemens Networks deal, burning the order before the ink has even had a chance to dry. No matter how many deals are struck, the limiting factor is the network build-out, which takes massive amounts of capital. So long as the terrestrial spectrum that it has licensed interferes with millions of GPS units and their applications, LightSquared will have a serious PR problem and continued government red tape. So long as there is red tape, the company will burn through more capital. The longer this is drawn out, the less inclined people will be to invest or partner with this operation.

Jim Kirkland, a vice president at Trimble, summed it up best in his testimony before a congressional subcommittee on March 11, 2011 (source SaveourGPS.org):

While the GPS community lauds efforts to add new broadband competition and free up spectrum for mobile uses, this must be done in the context of rational, long term spectrum planning, rather than the rushed, ad hoc waiver process followed by the FCC to date. Spectrum is a public asset and it should not lightly be handed over at the behest of a private party. More fundamentally, the laws of physics cannot be waived by the FCC. This is a serious problem with no obvious solution.

Controversial pursuits for wireless spectrum are nothing new. In essence, the AT&T purchase of T-Mobile is a spectrum acquisition. Now AT&T can re-appropriate T-Mobile spectrum toward LTE network bandwidth. The LightSquared acquisition of L-Band frequencies for terrestrial use is not only controversial, it could possibly disrupt society’s dependence on an established technology. As consumers, we have a choice between cable content providers, wireless phone carriers, and search engines alike. As a GPS user, I have only one choice for GPS signal, regardless of the brand of hardware. Doom and gloom aside, this attempted spectrum grab is unique, and likely to be repeated in a similar capacity in the future.

Welcome to the possible future, where we might hear the following from our flight attendants: “Please turn off and stow all LightSquared 4G devices as they will interfere with critical infrastructure, timing operations, construction, precision agriculture, machine control, E911, GIS mapping and survey, as well as this flight’s navigational control system. Buckle up, and enjoy your flight.”

You can get involved at Saveourgps.org.

Top Geospatial Articles of 2020
Top Geospatial Webinars of 2020
Top Geospatial News of 2020
How much do you really know about the U.S. Census?
Modeling Disease & Behavior Using GIS
A Pathway to Creativity and Dreams, Paved with Legos
Ghost in the Machine – Exorcise Phantom Addresses with Delivery Point Validation
The Emergence of Geo-Enabled 360-Degree Aerial Imagery
Why Cartography Still Matters
Podcast: Community Mapping and Social Justice - A Conversation with Black Girls MAPP
GIS Jobs: Current Industry Expectations
Three Predictions for the Geospatial Industry by 2025
Podcast: Why should you take a closer look into Open Source GIS?