The Virgin Islands has a long history of being pummeled by hurricanes. Hugo in 1989 and Marilyn in 1995 caused extensive damage. The Category 5 hurricanes that slammed into the Virgins Islands in 2017 were different because they occurred two weeks apart. Not only did Irma devastate the islands Sept. 6th, but also, it left St. Thomas, St. John, and St. Croix exposed and defenseless when Maria hit Sept. 19, 2018.

Roads were clogged with storm debris. Power was out. Public schools were destroyed or severely damaged. Hospital patients were evacuated, and major hotels were forced to close for extended periods of repair time.

During the last seven months, the islands' commercial sector has experienced an amazing renaissance, thanks in part to $800 million of federal aid. FEMA, the Army Corp of Engineers, and other government and private organizations have rebuilt the islands' infrastructure. Power has been restored. Cruise ships have returned. Restaurants have reopened, and commercial flights are back. In essence, you would be hard-pressed to identify storm damage in the business district of Charlotte Amalie, St. Thomas, the capital of the U.S. Virgin Islands.

What isn’t back are jobs, rooftops, larger hotels, and the general prosperity enjoyed before the storms hammered the islands. A good part of the aid money was directed toward reestablishing the tourist industry that is so critical to the islands' economy. In addition to rebuilding the business district, FEMA allocated grant money of $49 million for home repairs, approved $454 million for SBA home repair loans, and funded the installation of 3500 blue tarps for temporary roof protection.

Research done by The Washington Post indicates that more than 18,500 home and businesses were either destroyed or damaged. To further exacerbate the situation, most residents, excluding nonresident vacation homeowners, could not afford expensive storm insurance. In other words, the U.S. Virgin Islands may be open for business, but their future depends on finding ways to rebuild the homes of locals, many of whom support the tourist industry.

All Hands and Hearts is a volunteer organization that is assisting homeowners and schools that don’t have the resources to rebuild. It is difficult to give them enough credit. They are currently based in a condemned middle school, sleep in three different classrooms, and use the cafeteria as a tool shed and office. Their people work long hours in hazardous environments as nonpaid volunteers. They must find their own transportation to and from the islands, sleep on air mattresses that they bring, take ninety-second showers, and save the shower water for toilet use. 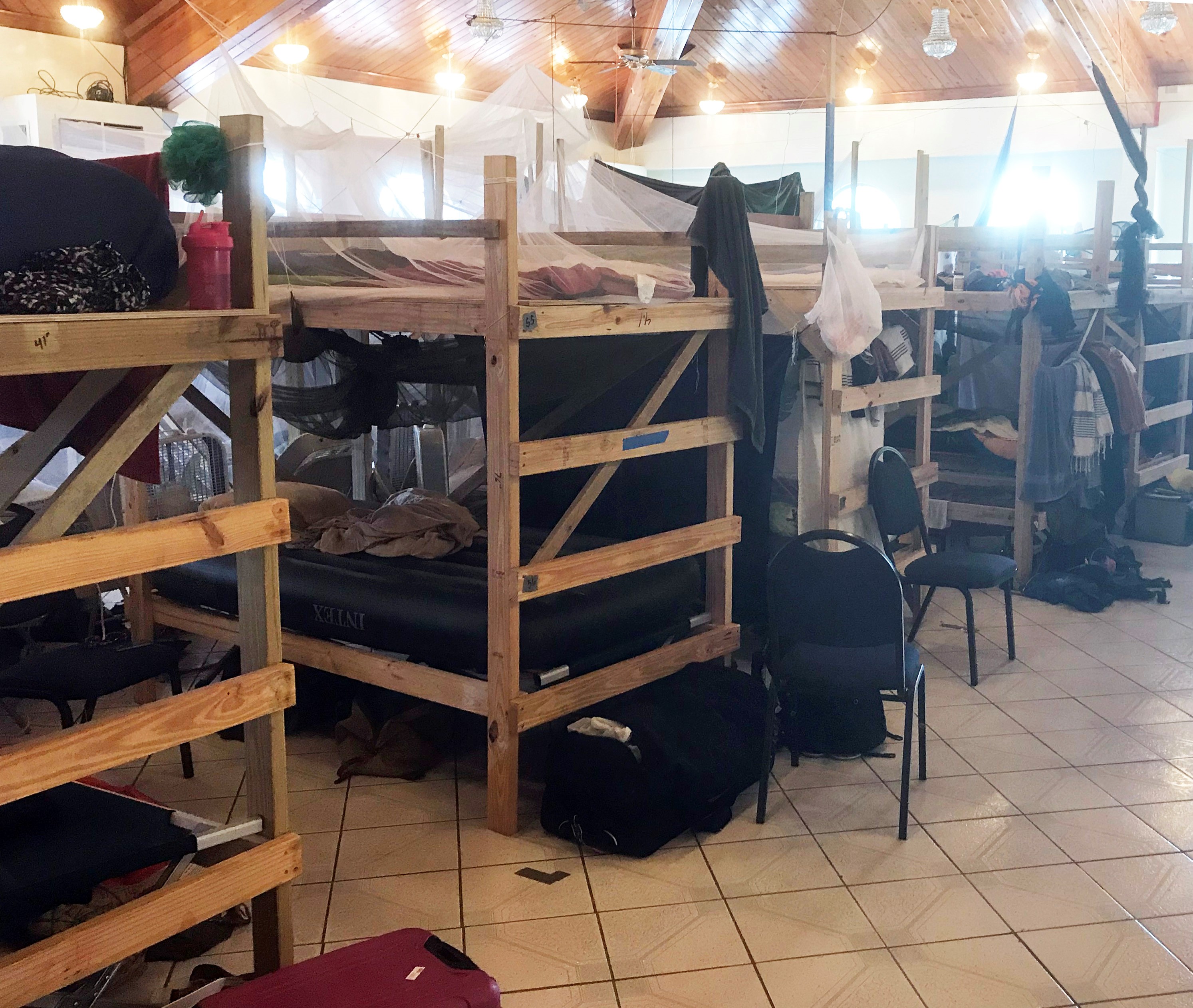 Volunteers for All Hands and Hearts provide their own mattresses.

Duties include tree and vegetation removal, eliminating mud, muck, and silt from water damaged buildings, tearing out and removing construction materials from ruined homes, and cleaning and drying salvageable remnants from destroyed structures. Once this work is completed, they rebuild schools and add roofs to some of the damaged houses they cleared and cleaned.

In early March, I teamed up with Connor Shafran, marketing content creator for All Hands, to document their home and school restoration work using data we collected from drone flights. Our effort was complemented by the use of data sourced immediately after the hurricanes by Joseph Hodge, a resident drone pilot and tour operator. These two databases enabled us to provide a temporal view of home and business structures on St. Thomas and St. John.

The image immediately below, shot soon after the storms, revealed a number of homes missing roofs, and debris scattered throughout the neighborhood. The next image, taken March 2018, shows that storm debris has been cleared and houses with damaged roofs have been patched (blue tarps) but not repaired. 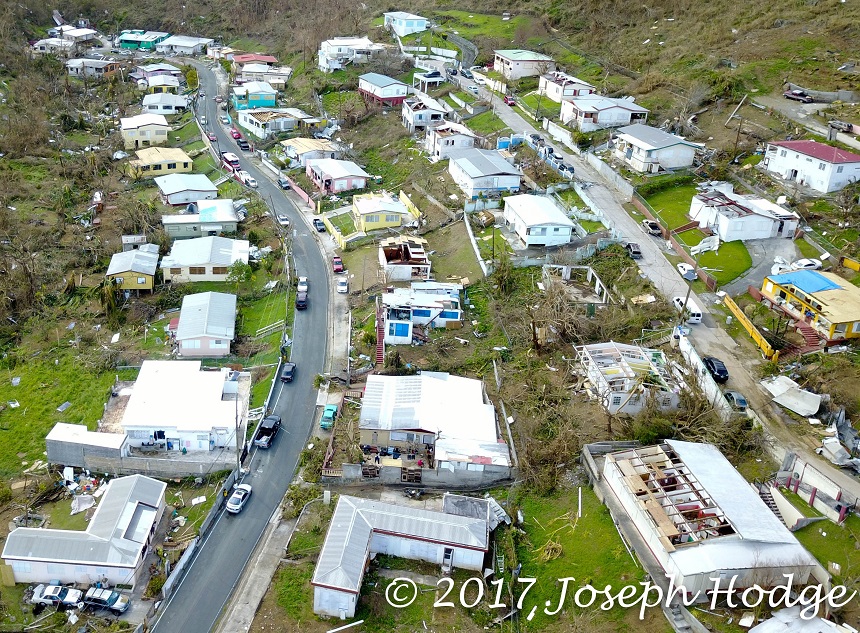 Debris littered the streets, and many homes were without roofs following the storms. 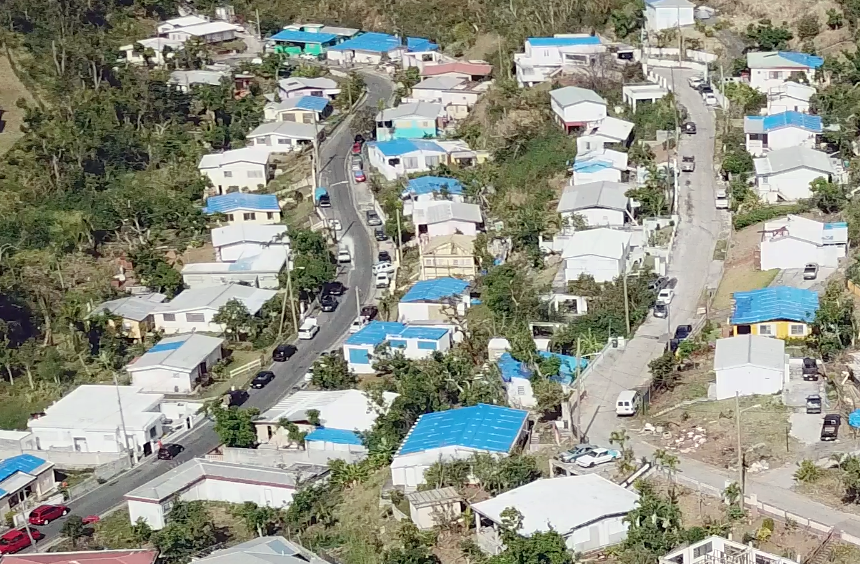 In March 2018, the debris has been cleared but many homes have only temporary roofing.

Our drone data indicated that this “blue tarp” roof scenario is pervasive throughout the islands. In other words, home rebuilding is proceeding at a much slower pace than commercial work.

The aid provided by All Hands is having a positive effect on this situation. As of April 2, 2018, 670 workers have logged over 50,000 volunteer hours, assisted 5249 people, removed debris from 271 sites, and rebuilt two schools. 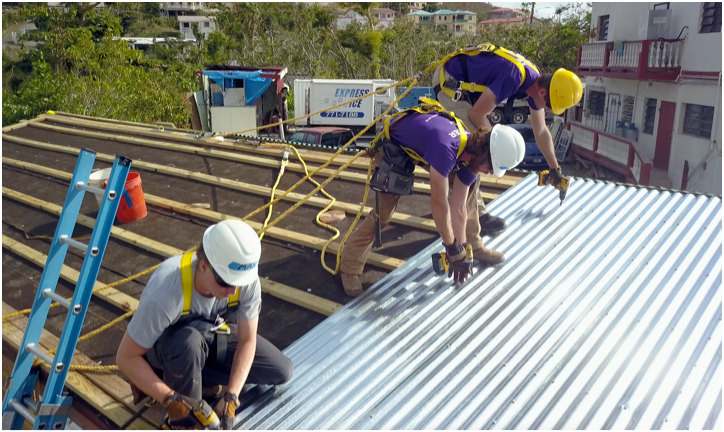 An All Hands crew is pictured below rebuilding a small school on the east end of St. Thomas. 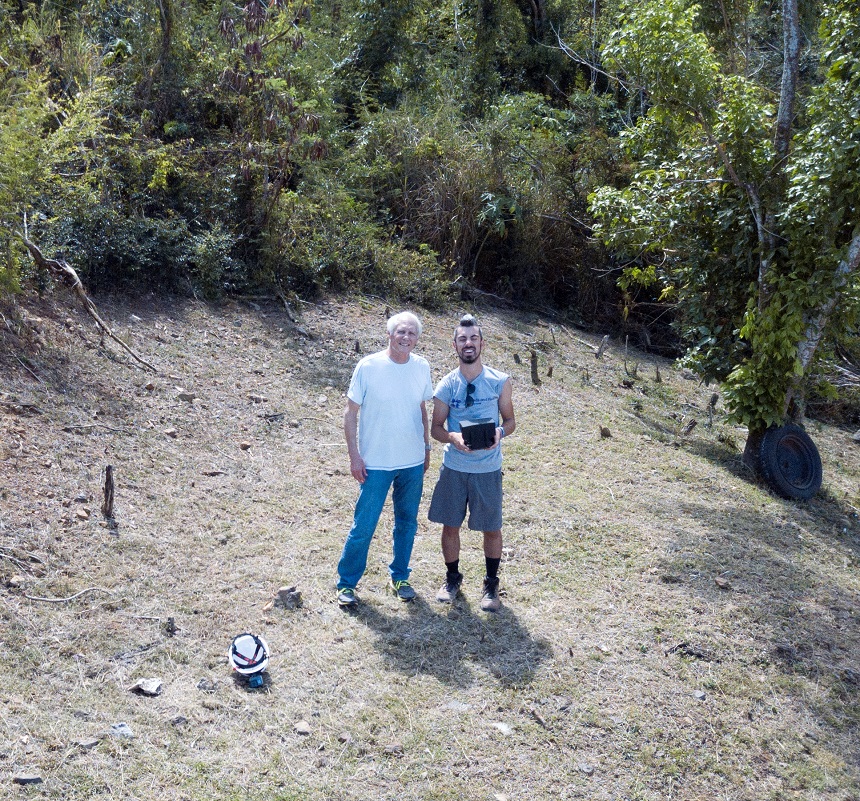 Bill McNeil of Directions Magazine and Connor Shafran of All Hands using DJI Mavic drones to collect data on the far-east end of St. Thomas.

Parts of the U.S. Virgin Islands have done an amazing job of recovering from the one-two punch delivered by hurricanes Irma and Maria. This is a result of the tremendous generosity of islanders helping islanders, aid provided by government groups like FEMA and the Army Corp of Engineers, and the work of volunteer groups like All Hands and Hearts.

Lack of tourist accommodations is an ongoing concern because most of the larger hotels remain closed for repair. Until hotels like the Ritz Carleton, Marriott, and Wydham on St. Thomas and Caneel Bay, and The Westin on St. John reopen, full employment won’t return to the islands. This has a ripple effect on home repair because many homeowners can’t finish rebuilding until they are reemployed in the tourist industry.

If you would like to be part of the ongoing volunteer efforts by All Hands and Hearts, you are encouraged to volunteer today!