New UAS Flight Approval System Rolling Out Across US

UTM stands for unmanned aircraft system traffic management. In a nutshell, the UTM system is a collection of services being developed by the Federal Aviation Administration, the National Aeronautics and Space Administration, and industry partners to “support the real-time or near-real-time organization, coordination, and management of primarily low altitude (< 400 ft. above ground level [AGL]) UAS operations.” (FAA) The impetus for the development of the UTM system is to enhance the communication of airspace status and constraints between the FAA and UAS operators in order to enable beyond visual line of sight operation in airspace where air traffic services are not provided or where the FAA does not typically provide control.

What’s LAANC? How does it fit in with the UTM system?

LAANC stands for Low Altitude Authorization and Notification Capability, and it is considered one of the key components in the UTM system. In near-real time, LAANC permits UAS operators to fly in controlled airspace near airports (class B, C, D, E) by enabling the FAA to check operation requests against airspace status and constraints (e.g. temporary flight restrictions, UAS Facility Maps), and approve requests that are not likely to interfere with manned aircraft operation. Operators can request authorization to operate in controlled airspace by using applications provided by various FAA Approved LAANC UAS Service Suppliers (e.g. AirMap, Project Wing, Rockwell Collins, Skyward).

Some operators and industry advocates regard LAANC as a game changer for the UAS industry, as it replaces the previous airspace authorization or airspace waiver system, an entirely written process which can take days or months for the FAA to process. The near-real time approval (or denial) process facilitated by LAANC is especially beneficial for operators flying time sensitive missions, where the ability to get a timely airspace authorization could make or break a business contract.

When is LAANC coming to my area?

When the National Beta test of LAANC is fully implemented in September 2018 it will cover approximately 500 airports. See which traffic control centers and airports will be affected by LAANC on Skyward's website or on the FAA’s UAS Facility Map, below.

How do I get authorization to operate in controlled airspace with LAANC?

In contrast to the written applications of the past which were manually assessed by the FAA, LAANC automates the entire application and approval process. This results in significantly reduced wait time for airspace authorization. A sample workflow will involve an operator using an application (e.g., AirMap for Drones) developed by an FAA Approved UAS Service Supplier to plan his/her flight route, with the application providing feedback on rules pertaining to the flight route and relevant advisories. In the event that the flight route traverses controlled airspace that requires FAA authorization, the operator will have the opportunity to submit a request within the application and receive near-real time approval (or denial) from the FAA.

The effort to develop a UAS traffic management solution to enable civilian low altitude operations is ongoing. The FAA, NASA, and industry partners are currently exploring new sense and avoid technology to allow cooperative (responsive) and non-cooperative (non-responsive) aircrafts to operate in the same airspace, and testing technologies for tasks such as package delivery in higher-density urban areas. 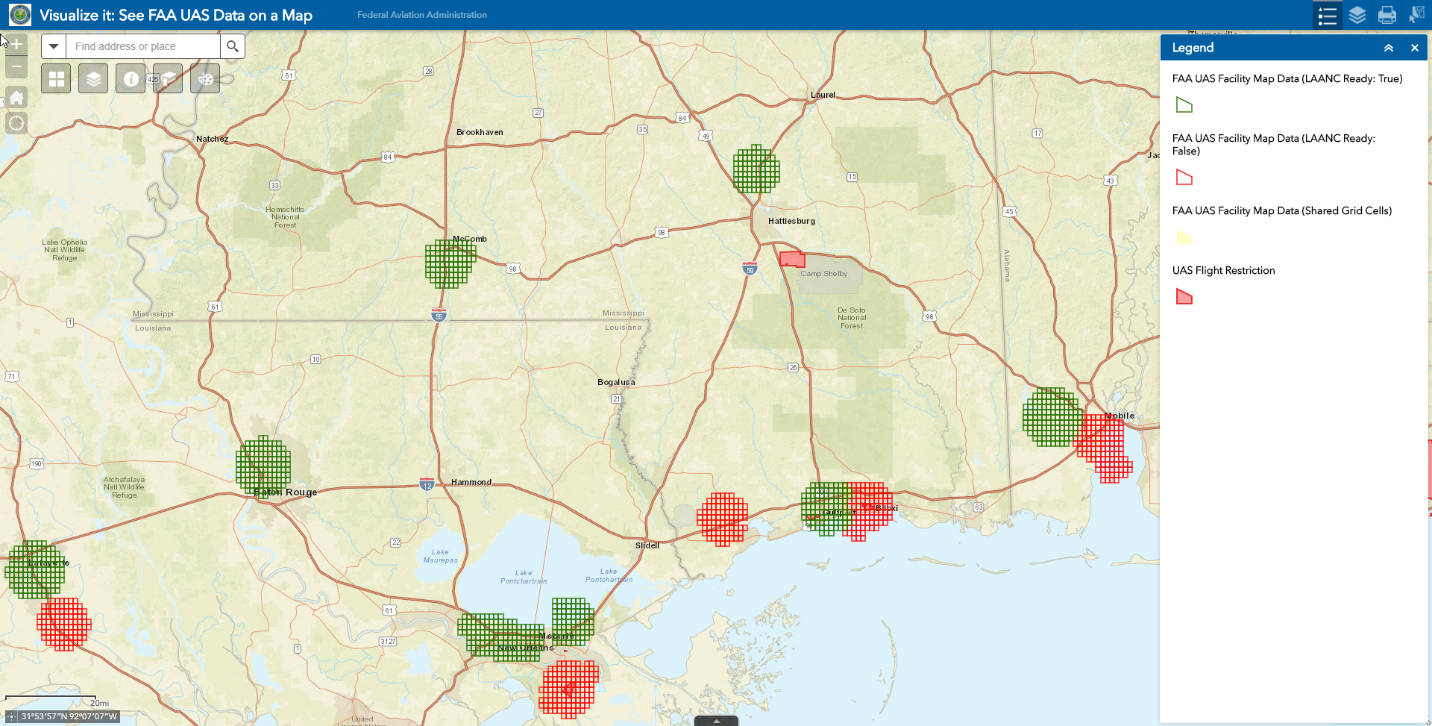 The UAS Facility Map illustrates which traffic control centers and airports will be affected by LAANC. (Image/FAA on ArcGIS Online)