Geoinspirations: Diana Ter-Ghazaryan - Weaving Together the Humanistic and Cartographic

Editor’s note: Thank you for joining us for this edition of GeoInspirations. Today our distinguished columnist, Dr. Joseph Kerski, features Dr. Diana Ter-Ghazaryan, a geographer and educator at the University of Miami, Florida, U.S.A.

When I visited Dr. Diana Ter-Ghazaryan at the University of Miami one year for GIS Day, I was very impressed by the way she works closely with her colleagues to promote and support spatial thinking and the rigorous use of geotechnologies. I was also impressed by her care of and attention to her students. But she also thinks beyond the university walls, across the ocean to Armenia and elsewhere, and in her own city, promoting GIS at iTech Thomas Edison Technology Magnet High School and in other schools in the area. She has had a unique pathway into this field that I am sure will inspire others; therefore, it is my pleasure to bring her to the attention of the readers of Directions Magazine.

I asked Dr. Ter-Ghazaryan to describe her current position and background. She said, “I am a full-time faculty member and director of the Geospatial Technology Program at the Department of Geography at the University of Miami in sunny Coral Gables, Florida. I have always been interested in geography, but my way into it was not a straightforward path, but rather a meandering walk through various disciplines, that brought me to the discipline I love. As an undergraduate student, I studied environmental science and chemistry, wrote a column titled ‘Earth Sense’ for the student newspaper, and was an on-campus advocate for recycling and other environmentally-friendly habits. During my freshman year I took an ‘Introduction to Social Science’ course, which opened my eyes to the unique approaches of the social sciences, and anthropology and geography specifically. I ended up picking up a minor in anthropology, and became convinced of the role of culture in everything we do in our everyday lives, and this realization became an inextricable part of my academic path.

“I started my graduate education in environmental studies and policy at Florida International University, and for my master's thesis, examined policy initiatives and practices related to conservation around a national park in post-Soviet Kyrgyzstan. After that, I began a doctoral program in international relations, with a focus on geography. In the early years of my graduate education I received what I now consider invaluable advice about taking a GIS course to help me map out the Issyk-Kul Nature Preserve in Kyrgyzstan, the territory of which is disjointed and scattered around the banks of beautiful Lake Issyk-Kul in the northeastern part of this Central Asian country. After that one course I was hooked, and geospatial technology would now become an inseparable part of my professional toolbelt.”

I asked Dr. Ter-Ghazaryan what convinced her to enter the fields that she ended up pursuing. “As I mentioned, my journey towards geospatial technology was more of a chance introduction, when my master's thesis advisor at Florida International University, Professor Joel Heinen, suggested I take a GIS course to help me with the mapping of Issyk-Kul Nature Reserve, which was the topic of my master's thesis research. After that first GIS course, I registered for and completed a graduate certificate in GIS and Remote Sensing during the rest of my graduate career, and became enthralled with the power of geospatial technology, and the revelations that were made apparent after having included the spatial component in any line of inquiry. I consider myself a cultural geographer, and I think that ‘soft’ social sciences such as cultural geography, as well as humanities, have many interfaces with geospatial technology, and I love to explore those. I am most passionate about revealing parts of any story that are latent and only brought into focus once the spatial component is explored. So today, my research and teaching interest lie at the intersection of geospatial technology and cultural geography, and I work on finding ways to map and visualize the abstract and ethereal, such as connection to place, nationhood, identity and the like.”

What has most inspired her during her career? “One of the most inspiring courses of my graduate career was a graduate seminar titled ‘Space, Place and Identity,’ in which we read many foundational cultural geography texts, as well as texts that revealed to me the deep connections that geography has had with philosophy. Readings that described how people made their most intimate connections to place, and how people attached meaning to place, blew my mind. During the same semester, I was also taking one of my intermediate GIS courses, and while one might expect that these two courses had very different geographic approaches, as if from opposite sides of the spectrum of the discipline, and would have nothing in common with one another, I began to see parallels and connections emerge.

“The way people live their lives, their habits and predilections, are intensely spatial, which means that they can be visually represented on a map. How could that be done, taking care not to reduce a person's intimate, particular connections to place to a pair of coordinates? Scaling up to the level of the nation, looking at nationhood and identity, how and where are ideas about belonging and exclusion expressed in lived landscapes? In the landscapes of national capitals? These ideas began to inform my dissertation on the symbolism inscribed into the urban landscape of Armenia's capital city, Yerevan. In my research since then I have continued weaving my research through these two seemingly distant parts of geography — the qualitative and the quantitative, the humanistic and the cartographic.”

What project or initiative is she the proudest of being part? Dr. Ter-Ghazaryan said, “One of my proudest achievements is the collaborative ‘OtherYerevan’ project, which is a virtual museum of urban cultural heritage in Yerevan, Armenia. My colleagues and I started this virtual museum as a way to commemorate and preserve a layer of history and cultural heritage in Yerevan which we felt was being neglected (buildings and monuments representing the era of Soviet modernism), but the project grew to include much more than that, and now boasts over 150 virtual entries of buildings and monuments in the city of Yerevan. We like to think of OtherYerevan as a way to see Yerevan from the perspective of a local resident who is knowledgeable about the city's architectural and cultural history.

“We launched the website in 2015, and received funding to create a mobile app shortly thereafter. Both the site and mobile app have been very popular with locals, as well as tourists interested in cultural heritage, walking tours of urban areas, and the like. My colleagues and I are now exploring ways to expand the project, both vertically and horizontally. We would like to increase the amount and quality of information about each entry already on the site, as well as increase the number of entries themselves, and move beyond the limits of Yerevan to the rest of the country.” 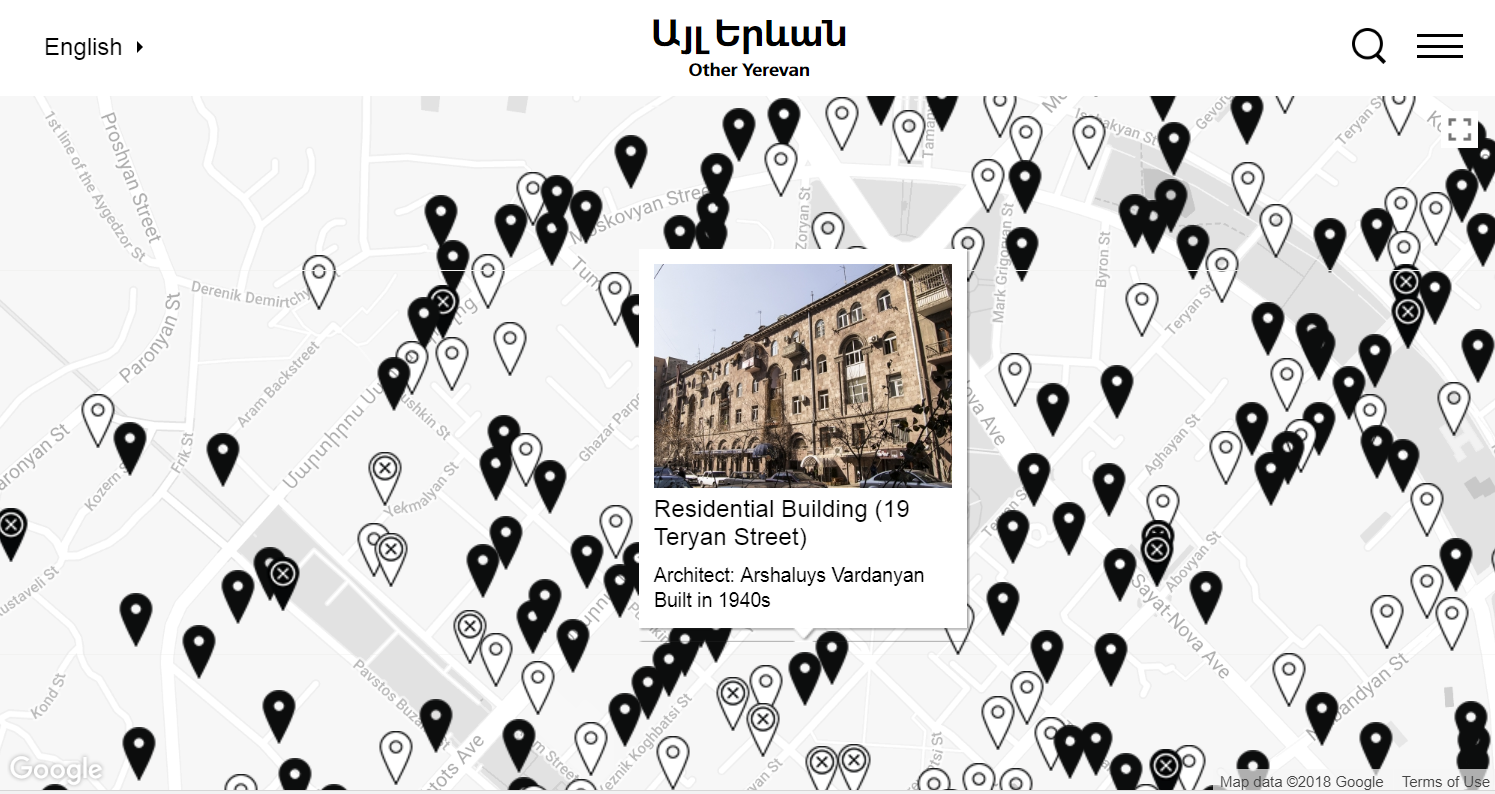 What does Dr. Ter-Ghazaryan believe is the most important thing on which we need to work as a community? “Specifically with regard to geography, I think we need to break through the stigma, or rather the misinformed image that our discipline has of an old, dusty pseudo-science focused solely on overseas explorations and being able to recall capital cities of countries. Few disciplines are as dynamic, constantly developing and all-encompassing (by this I mean in relation to so many things) as geography and geospatial technology, and at the same time few disciplines are as poorly regarded as geography. It's almost as if one does not know the first thing about geography unless one studies it, invests in it, and stays with it. I think we as geography and geospatial technology educators need to continue thinking of ways to make our discipline approachable and exciting, at the same time revealing its dynamic and connective components to those who may not be aware of them.

“Plus, those of us in higher education should work with our colleagues in primary and secondary education to get students exposed to our discipline earlier, and in an exciting fashion. Though anecdotal, it has been my experience that once students are introduced to modern-day geography, and the connections that it reveals, they become convinced of the investigative power that the spatial perspective can introduce into any line of inquiry or research. Many other disciplines are aware of this connection, and use the spatial perspective to their advantage. Instead of feeling threatened by this development, as some geographers are, we should be proud of the fact that geographic methods and approaches are helping advance inquiry and knowledge creation, and work hand in hand with other disciplines to develop and deepen the use of spatial perspectives across the spectrum of knowledge.

“My advice to a new professional in the field is — stay curious and open to opportunity! Geography and geospatial technology have something to say about so many things, and you never know what you might end up using your geo-skills for!”

Dr. Ter-Ghazaryan's favorite quote is: "The only thing that is constant is change."  — Heraclitus