Power and Responsibility: Maps and Journalism

As 2018 drew to a close, both Time Magazine and High Country News each dedicated an entire issue to threats against independent journalism. In this article, we too, are going to delve into the issue, exploring the role of GST in independent journalism. Maps and journalism have incredible power to both inform and distort our view of the world. Tragically, journalists, and therefore, journalism, are under attack worldwide. In this article, we will explore the potential and dangers of mapping’s role in the press.

A Matter of Scale

Like me, you may have to dust off the cobwebs to remember Tobler’s First Law of Geography: “Everything is related to everything else, but near things are more related than distant things.” Both cartography and journalism are scalable. Our view of the larger world is shaped by the events that we see daily in our own neighborhoods, while occurrences at the global, national and regional scales have ripple effects, and sometimes direct influence, on our local lives and communities.

In 2016 I had the opportunity to attend a cartography workshop hosted by the Oregon-Southwest Washington chapter of URISA. Presenting were two professional cartographers, Stuart Allan of Allan Cartography and Matt Hampton of Oregon Metro. To make the workshop both timely and relevant, we critiqued maps from the morning edition of the local newspaper, The Bulletin. Beyond the cartographic education, this exercise also illustrated the importance of local news, and how maps play a key role in the reporting of important local events. One of the maps we reviewed was of a planned road closure, and another was of a regional forest treatment plan.

We have all heard about the dearth of geographic awareness and knowledge among Americans, as seen on Jimmy Kimmel Live! Following the Gulf War of the early 1990s, I was a T.A. in an introductory geography course. Our professor used videos by the eminent geographer Harm de Blij to show how global events influence our local lives. A scholar as well as a reporter, De Blij was a pioneer in telling the news with maps and geography.

Along with his scholarly works, Harm de Blij had a gift for making geography relevant to the masses. As the geography editor on ABC's Good Morning America and an editor of National Geographic magazine, De Blij brought places as diverse as Dubai, Vietnam and Iraq (to name but a few) into our classrooms and living rooms. His reporting was more than a travelogue. He was passionate about explaining how events in remote places affected our daily lives.

Between the local and global scales lies the regional level. Hurricane Andrew in 1992 was the most expensive and devastating natural disaster in the U.S. up to that date. It tracked across the Atlantic Ocean and slammed into South Florida in August 1992. There were hundreds of deaths and over $25 billion in property damages. NOAA and NASA provided data and imagery to local and regional news outlets in near real time. However, due to the intensity of the storm, many news outlets in the affected areas were unable to broadcast.

After the storm, recovery was the highest priority, but determining the causes of damage was critical for mitigating such destruction in the future. As a lead reporter for the Miami Herald, Steve Doig and his team used GIS to illustrate how decisions made at the administrative level led to increased and preventable damage from this event.

This GIS-based reporting earned him the Pulitzer Prize in 1993. Doig’s ground-breaking work led to an increased awareness of the utility and feasibility of GIS in journalism and was featured in Esri Press’ “Mapping the News: Case Studies in GIS and Journalism.” This was the first recorded deployment of GIS in the newsroom, but certainly not the first use of mapping in journalism.

When did journalism begin?

Humans have been telling stories for as long we have been humans — through songs, narratives, art and maps — in other words, for millennia. But when did “journalism” actually begin?

There is a great difference between storytelling and journalism: Journalism should be based on facts. Free journalism as a professional endeavor is, historically speaking, a recent development. Although there had been newspapers since the 1600s, it wasn’t until the late 1800s that social responsibility began to define independent journalism.

According to Encyclopedia Britannica, “The earliest newspapers and journals were generally violently partisan in politics and considered that the fulfillment of their social responsibility lay in proselytizing their own party’s position and denouncing that of the opposition.”

In the U.S., maps were a key component of the coverage of the American Civil War. The Library of Congress has archived Civil War newspaper maps, mostly from the New York Times. I haven’t done enough research to determine whether these maps were completely factual, showing all battles, (many of which the Union lost in the early war), or whether they showed only Union victories to maintain public support, but it is worth a closer look. 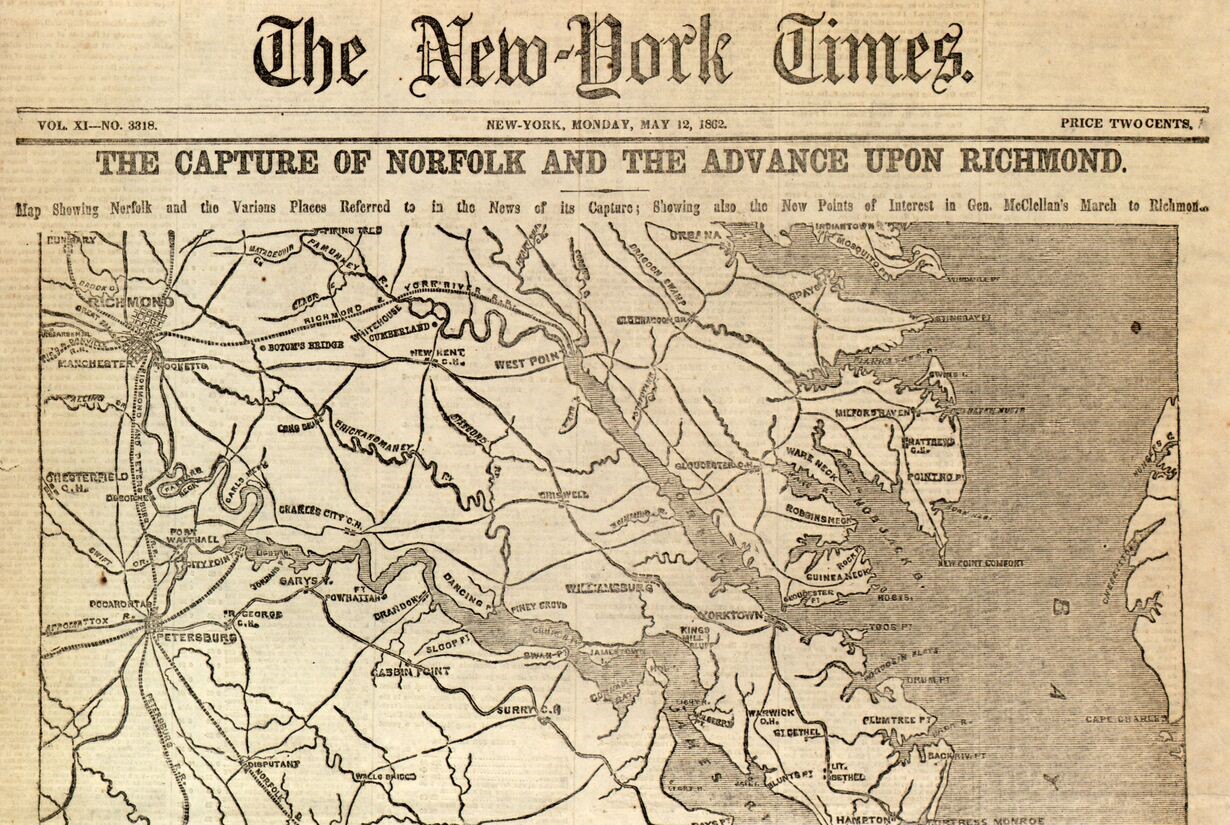 Maps were a key component of the coverage of the American Civil War. (Library of Congress, Geography and Map Division/New York Times, May 12, 1862.)

Well, of course they do. As cartographers, we know that all maps have to present the truth in a selective way. Aerial imagery can’t show everything; it is dependent on both spatial and temporal resolution. Even fact-based maps have to lie. A subway route map shows time and locations, but schematics distort both distance and direction.

That gives journalists and cartographers power to use maps to deliver specific messages, regardless of their political affiliation. The Southern Poverty Law Center publishes a Hate Map every year, showing extremist groups across the U.S. While factually based, it is still subject to interpretation. As an opposing web site claims, “There’s a certain randomness to this designation.”

“Fake News” isn’t just a 21st century issue. Propaganda maps have been used in public media for decades, if not centuries, as mentioned above. Journalism and maps can have a formative influence on our worldview. Where is the boundary between objectivity and subjectivity? Some call it propaganda, others call it persuasive cartography.

While well beyond the scope of this article, there are numerous academic studies related to maps and journalism. An excellent summary of the evolution of maps in the newsroom by Richard Bedford discusses both the benefits and pitfalls of using maps in media as well as its history, starting with John Snow’s famous Cholera map of London.

Kalev Leetaru of Forbes took a much deeper dive into the analytics of GIS and journalism, mining over 850 million news articles in 65 languages from every corner of the globe to make a “Happiness Index” map. Again, the details are far beyond what can be covered here, but it is a fascinating illustration of the power of GIS, machine learning and big data to make the invisible visible.

For full disclosure, I don’t watch TV news, except for the local weather. For many of us, that may have been our first exposure to maps in journalism. Long before GIS and internet mapping, I remember Bob Gregory waving his hand over storms and pressure fronts on Channel 4 in Indiana. Although the imagery and technology have become more sophisticated, the idea is still the same: deliver important information in a geographic context, and illustrate how something distant will affect us at home.

Maps are defined by their medium, and the medium dictates the level of interactivity. In print, a snapshot is offered, while on a TV weather map the broadcaster manipulates the map. On the web of course, there are countless tools for user-driven interactive mapping.

But what about radio? While print, TV and the internet allow for a visual representation of geography, radio doesn’t. Amateur (aka “Ham”) radio isn’t necessarily journalism, but independent operators provide a valuable service in times of emergency, as do local stations. Several sites offer maps of radio coverage of various radio outlets. So not only can GST be used in journalism, it can also map journalism and media itself.

Journalism Mapping for the Rest of Us

We can all use mapping to tell stories. Whether through social media, story maps or many other outlets, we all have the power to be journalists in our own right, and an obligation to do it responsibly.

Recently I taught a course on environmental law and policy. Each week students delivered a news summary which we discussed in class. They had to cite at least two sources and always include a map. Often the maps were included in the article, but not always, so the students had to research the location. Whatever way, it led them to associate an issue with a place and its geographic context.

Along with the usual mapping apps such as ArcGIS Online and Google Maps, there are a plethora of other apps designed for journalists. An excellent place to start exploring is Alastair Otter's mapping toolbox for journalists, which describes various open-source tools for mapping the news.

Maps and journals are ubiquitous in our lives. They have immense power to both inform and distort our perception of the world, both globally and locally. To quote the late Stan Lee’s character Spider-Man: “With great power comes great responsibility.”