Mapping the Resources of Absence

Every paradise has its price. Where I live, we can see the Milky Way on a clear night and hear the ice move on Agency Lake as it freezes and thaws. We also go for days without internet or phone service. Yet during these times, I am reminded of how fortunate we are to be so close to nature, to be close to… absence.

The absence of what? Most natural resources like redwoods, bison and even small rare plants like the Golden Paintbrush, are obvious to our senses. But what about the resources we don’t see or hear? In this article, we’ll explore what I call the resources of absence: natural sounds, dark night skies and clean air. GST has been a critical component of quantifying these seemingly qualitative resources, which are critical to human health.

Darkness as a Resource?

For most of human history, we lived by the cycles of the sun. We worked when it was up, and didn’t when it wasn’t. Candles, torches and fires illuminated the indoors and some streets, but otherwise, the world was dark. Then in 1848 came the electric light bulb, which changed humanity’s habits forevermore.

For over 25 years, NASA has been mapping the Earth at night. Aside from displaying the aesthetic value of natural night skies, satellite images of Earth at night have served as a fundamental research tool, both terrestrial and astronomical. These images also raise public awareness and fuel curiosity that leads to conversations (especially when posted on a classroom or office wall!). The images paint an expansive and revealing picture, showing how humans have illuminated and shaped the planet in profound ways since the invention of the light bulb.

One of the most iconic examples of mapping these resources is NASA’s satellite mosaic of the world at night. This is a snapshot composed of over 200 individual satellite images. A deeper dive into NASA’s night skies mapping efforts describes the technology and methodologies used in this ongoing project, as well as featuring some spectacular images.

These satellite images give a wonderful view of our world from above, but what about the view from down here? As we all know, the horizon is not limitless, but the sky above is — if we can see it.  A previous article by Troy Lambert in Directions Magazine explored how light pollution negatively affects scientific research (especially astronomy), wildlife migration, and human health, as well as the technology used in these mapping efforts.

Some of the darkest skies are found in lands managed by the National Park Service, in protected and remote areas, far from light pollution. Along with an entire program dedicated to night skies, the NPS has a very talented GIS team. This amazing story map discusses the technology involved in monitoring night skies, and offers stunning images.

Other than astronauts, most of us only see the night sky from the ground. I advised a friend who had never flown before: “Get a window seat; you’ll view the world like you’ve never seen it before.” Some of us may be fortunate enough to have stayed awake on a red-eye flight. The world looks different from 34,000 feet, especially at night as we soar over illuminated cities and unlit expanses. 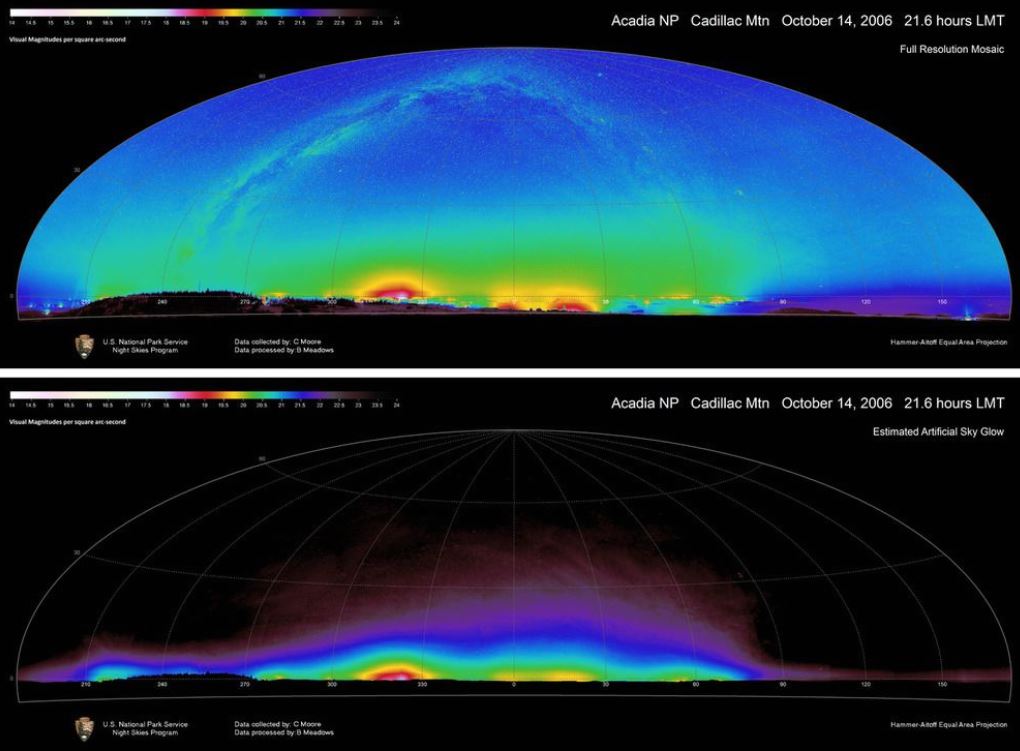 One Square Inch of Silence

Another resource of absence is the natural soundscape. Full disclosure: I love air travel, but my perspective changed when I led a project to establish a baseline of natural sounds at Crater Lake National Park in advance of an air-tour management plan.

The human health benefits of natural sounds are well documented. One of the main attractions to visitors to national parks are natural skies and natural sounds. Commercial helicopter tours were proposed over the park, so we needed to establish a baseline soundscape. How?

Using acoustic monitoring stations, such as those deployed at North Cascades National Park, my intern and I monitored over 20 sites over two years. Using ArcPad and ArcGIS Desktop, we made maps of these sites and the natural sounds we heard there, as well as the anthropogenic ones. Once we started really to listen, we realized that no matter how remote you are, you always hear planes. There are over 30,000 commercial flights over the U.S. every day! Our analyses indicated that less than 20% of any day has only natural sound.

An ambitious project called “One Square Inch of Silence” has used GST with on-the-ground observations to identify and map what may be the quietest place in the USA. Located in the Hoh Rain Forest at Olympic National Park, it is far from air travel routes and major roads.

At Crater Lake National Park, biologists are using similar, low-cost acoustic technology to monitor nesting sites of the endangered Northern Spotted Owl, along with SPreAD-GIS. An open-source toolbox for ArcGIS Desktop, SPreAD-GIS was developed by the U.S. Forest Service to support transportation and recreation planning and quantify the propagation of anthropogenic sounds. Initially developed for these planning purposes, it has found its way into scientific research and other resource management endeavors. We used SPreAD-GIS to build predictive models for the best places to place acoustic monitoring stations. These models were based on open-source data of vegetation, slope and weather. The process was labor intensive, but resulted in a savings of hundreds of hours of crew time.

What about the Human Environment?

Most of the examples above are in natural areas, where noise and light pollution are still relatively scarce. However, many cities also realize the value of the resources of absence. Because of the numerous observatories in the area, Tucson, AZ has been a pioneer in mitigating urban light pollution since 1972. Smaller cities, such as Monterey, CA, have used GIS to analyze the threats of light pollution on sensitive species.

Look Up and Listen!

As with all resource management, preserving the resources of absence requires both technological solutions, ranging from desktop spatial analysis to space-age observatories to simple sound recorders deployed by hard-hiking field crews. It also requires community awareness and participation. To quote a song: “You don’t know what you’ve got till it’s gone.”

Winter is a wonderful time to explore night skies and natural sounds with friends, family and students. Whether in an urban setting, where the sky is bright pink and planes crisscross the sky, or out in the country or wilderness, the nightscape and soundscape will tell many stories, if you’re willing to open your eyes and ears to see and listen.

Walking into a dark room, it takes your eyes a few minutes to adjust to the diminished light, but then you start to see things that were previously invisible. The same is true of natural sounds. One of my favorite exercises with students (and adults!) is to have a minute of silence. Mouths silent, devices off. There is nothing there for the first few seconds, but then…the world opens up. One small minute of silence and darkness can change one’s view of the world forever.

Is There a Conclusion?

Only recently has absence been acknowledged as a resource. Fortunately, in the last five decades we have come to realize that clean water, clean air and healthy ecosystems are of value and common to all. We’re slow learners — the Cuyahoga River in Ohio had to catch fire 13 times before Congress passed the Clean Water Act in 1972.

The same is true of dark skies and natural sounds. These resources of absence have been critical to human survival and progress for millennia. Ancient civilizations built observatories to plan their plantings and harvests, predict eclipses and measure the Earth. People have learned the calls of animals to call them in for food or simply to observe them. With increased anthropogenic input into soundscapes and lightscapes, there will be a ripple effect on all of our natural resources.

Geography has progressed exponentially as a science since the days of Mayan and Egyptian stargazers, but our mission as scientists and citizens is still the same. We use geographic science and technology to not only collect empirical data, but also tell a story, or countless stories.

Distilling facts into compelling messages will lead to action, which will bring all of us to a more hopeful future, and remind us of our ethereal connections to the silent and dark wonder that lies just within our perception… if we watch and listen. What more compelling way to deliver these messages than maps? As the motto of the National Park Service’s Air Resources Division says: Breathe Easy, See Far, Let Nature Thrive!