The City of Burbank: Improved GIS Data Pays Off Across the Organization

This article brought to you by Melissa

The City of Burbank, known as the “Media Capital of the World,” is located in the Los Angeles metropolitan area of Southern California. With a population of 103,695 (according to 2018 U.S. Census estimates), the city relies on accurate address data for mailing public notices, permitting projects and address verification for many projects throughout city departments. Yet accurate address data isn’t always automatically or readily available. The GIS team at the City of Burbank took on this challenge – and found that by maintaining correct, up-to-date address data, they could better serve residents and businesses and ensure their jurisdictions could adequately notify and communicate with the public, respond in emergency situations, and even take full advantage of federal funding.

As is true in many municipalities, businesses and residents of Burbank are required to submit permit applications for new projects that impact their neighbors and the city. These permits can be for something as simple as hosting a garage sale; permits must be obtained so the city can readily enforce garage sale frequency limits and other parameters, ensuring residences are not exploited as retail establishments within the confines of residential neighborhoods. Permits are also necessary for construction and involve notification and sharing of structural  plans with residents and property owners within 500 feet of new construction.

Issues like missing unit numbers for apartment buildings,  PO Boxes versus  physical addresses, and the fact that Burbank’s permitting system only had addresses for properties with previous construction permits revealed the extent of the city’s address data accuracy problem. Mike Carson, Geographic Information System (GIS) Manager at the City of Burbank, knew from experience the value of accurate address data, especially considering its impact on other city challenges such as delivery of emergency services and the pending 2020 Census.

In addition to benefiting city constituents, accurate address data is necessary for the U.S. Census Bureau to fulfill its mandate “to reach every living quarters and associated population for inclusion in the census.” To that end, the Bureau relies on city and county departments to participate in LUCA (Local Update of Census Addresses Operation) for greater accuracy in census statistics. Since federal funding is based largely on population, it is to any city’s advantage that the most accurate number of its citizens are counted. More citizens, more federal funding for the municipality. “With better address data, we were able to add more than 300 missing addresses to the Census file provided to us by the federal government.”

Like many municipalities, the City of Burbank leverages geocodes (based on latitude/longitude coordinates) to visualize patterns and uncover insight. But when personnel encountered inaccuracies as a result of addresses geocoded to a street center line versus directly on top of a building, Carson realized the city’s geocode data also needed significant improvement. “By pinpointing rooftop data points instead of center line data, we could boost address accuracy throughout multiple applications within our GIS implementation.” Carson also recognized this tack would assist with LUCA, expedite appropriate notification of the public about any number of projects per municipal rules and regulations, and move the city toward achieving a centralized database accessible to all departments. 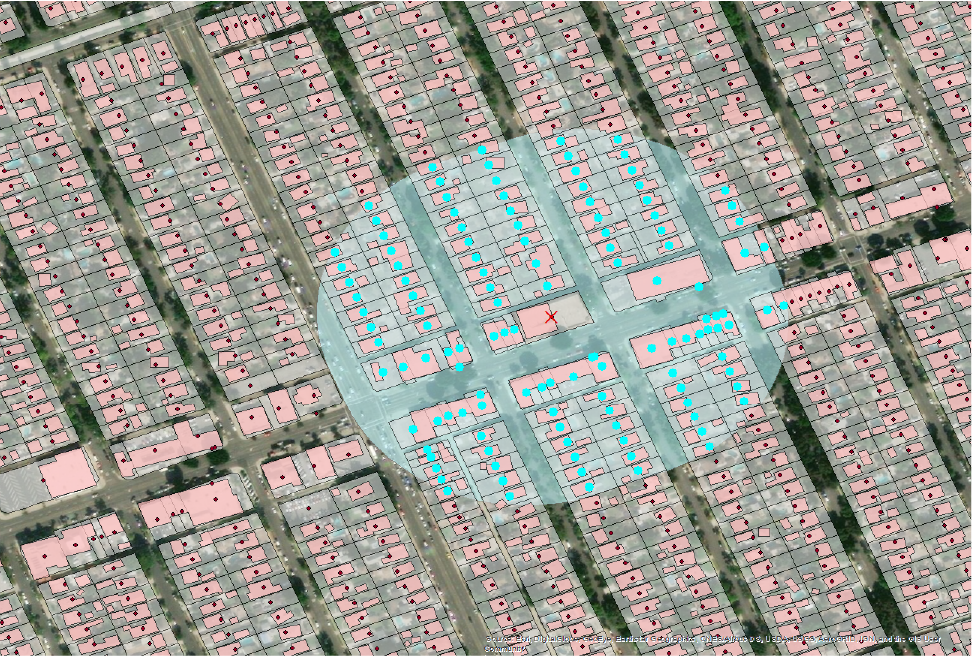 The City of Burbank needed to notify residents of proposed or current construction, represented by the X, taking place within 500 feet of their homes. This image demonstrates how rooftop data is pinpointed instead of centerline data, boosting address accuracy throughout the City of Burbank’s GIS-based applications and helping them more easily notify residents as required. In the image, the gray shapes are the land parcels while individual buildings are represented by the salmon-colored shapes and geocodes are blue dots. Previously the city’s data tool geocoded addresses only to the center of the street, and now they are more clearly noted at the centroid based on the subdivision of the land parcel. Note that some of the larger buildings in this image may be apartment complexes. In this case, the complex’s blue dot is now associated with a Master Address Key (MAK) as a base number unique to that building, as well as sub-MAKs unique to each of the building’s multiple apartments. In the event of a required notification, the City of Burbank can now access and compile address data for the MAK and sub-MAKs for this and other structures in less than a second. Image courtesy Melissa. Source: ESRI, Digital Globe, GeoEye, Earthstar Geographics, CNEs/Airbus DS, USDA, USGS, AeroGRID, IGN, and the GIS user community. File created in ArcGIS.

Carson set out to rectify the city’s address data issues and establish a complete accurate master address file. He chose a tool that consolidates location information and provides true address details on all residences, businesses, apartments, suites, and PO Boxes – with geo-coordinates and demographics. With this information, the city would have complete data to optimize, improve and increase its planning and project management activities.

Because the address tool’s formatting was in line with the city’s existing data, integration was simple.  “We found GIS location accuracy matched 99.9% of the time, with pinpoints located precisely on top of buildings while alternatives wouldn’t land on the building or even register the correct street,” Carson said.

With the newly accurate and updated addresses, the City of Burbank’s GIS department was able to share address data across other departments for use, giving Carson the satisfaction of achieving his goals supporting LUCA, public notifications and a centralized database for internal use. By enriching the city’s data with valid and verified records for easy management across departments, its GIS department has furthered the utility of address data throughout the organization and beyond. 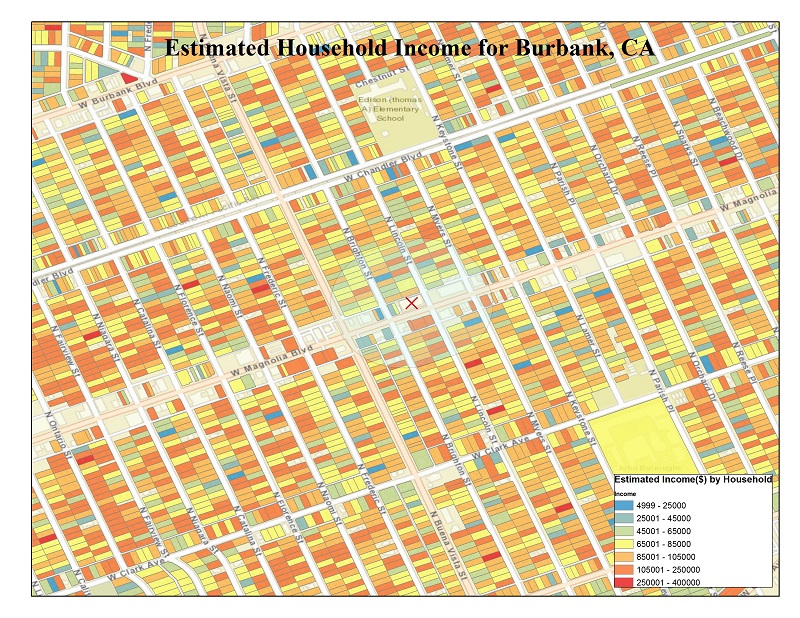 About the City of Burbank, GIS Department

The City of Burbank has been using Geographic Information System (GIS) technology since the late 1980’s. The system has grown into an Enterprise GIS which is integrated through the entire organization. City staff can manage, share, and use spatial data and related information to address a variety of needs, including data creation, modification, visualization, analysis, and dissemination. GIS represents the digital record of the City’s land base and utility networks including parcels, lot lines, electric, telecommunication, and water and sewer systems.

Title image: The City of Burbank is known as the “Media Capital of the World” and is home to Warner Brothers Studios as well as Walt Disney Studios. Image courtesy Melissa. Source: iStock

What’s Wrong with the 2020 Census - Why You Should Care - How to Deal with It
What is LaserGIS® & Offset Mapping?
This Planet Ocean: Mapping the Other Two-Thirds of the World
Top Geospatial Webinars of 2021
Top Geospatial Articles of 2021
Top Geospatial News of 2021
Equity Mapping: How We Can Do More with GIS
Many Faiths, One World: The Geography of Religion
Coincidence, Correlation or Causation? The Geography of Mysteries
Leading with GIS for Better Citizen Services
How to Ensure Your GIS Analytics Project Succeeds
New Paradigms in Land and Asset Management
Podcast: Geospatial Experts as Witnesses
An Easier Way to Work with Imagery & Raster Data
Open Data, Local Knowledge and Geospatial Technologies: Public Participation is key to disaster recovery
Women's Geospatial Perspectives Bring New Ways of Thinking
Paving the Way to More Inclusive Conservation Efforts
Why Cartography Still Matters