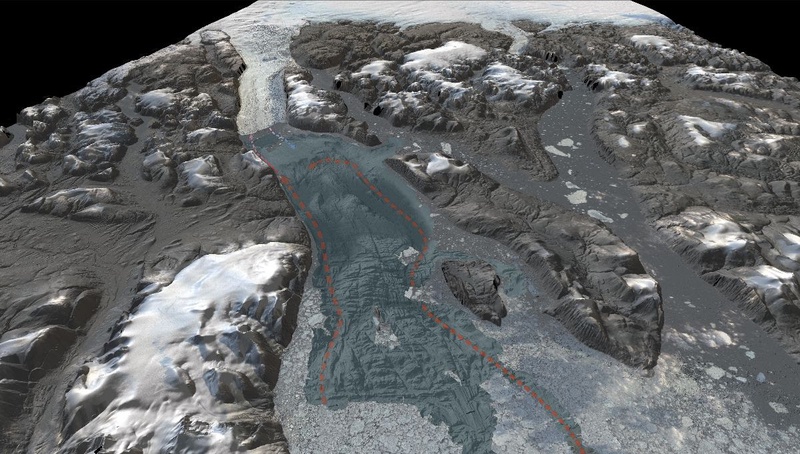 London, 9 November 2020 – New bathymetric and oceanographic data collected by an international team of ocean scientists provide important insights into the processes that are controlling the rapid loss of the Greenland Ice Sheet over the last four decades. The ground-breaking data, published in the Nature Journal Communications Earth & Environment, will be contributed to The Nippon Foundation-GEBCO Seabed 2030 Project, which aims to have the definitive and complete map of the ocean seafloor by 2030.

The Swedish icebreaker Oden ventured into the previously unmapped Sherard Osborn Fjord, where the Ryder Glacier drains into the Arctic Ocean. Melting and calving glaciers act as key catalysts for the increasing loss of ice sheet. But the processes controlling advance and retreat of outlet glaciers remain relatively unknown, limiting the ability to assess their fate and contribution to global sea-level rise.

The data show that warmer subsurface water of Atlantic origin enters the fjord, but Ryder Glacier’s floating shelf – at its present location – is partly protected from the inflow by a bathymetric sill located in the innermost fjord. This reduces under-ice melting of the glacier, providing insight into Ryder Glacier’s dynamics and its vulnerability to inflow of Atlantic warmer water. The data may also play a valuable role in undertaking assessments of the North Greenland Ice Sheet’s future retreat.

"The data we have collected aboard Oden provide an important insight into why the future mass loss of the Greenland Ice Sheet is complicated to assess. It also highlights the necessity of having a complete map of the ocean floor,” comments Professor Martin Jakobsson of Stockholm University, co-leader with Professor Larry Mayer of the Seabed 2030 Arctic and North Pacific Ocean Regional Center.

"Seafloor bathymetry, along with in-situ oceanographic measurements, have a very important role to play in acquiring improved assessments of the marine cryosphere’s development in a warming climate.”

About The Nippon Foundation-GEBCO Seabed 2030 Project:

The Nippon Foundation is a private, non-profit foundation established in 1962, in Japan, for the purpose of carrying out philanthropic activities, using revenue from motorboat racing. The Foundation places an emphasis on social innovation, and implementing ideas to bring about change for a better society. Its activities encompass wide-ranging areas such as the fight against leprosy, peacebuilding in Myanmar and passing on the riches of the ocean to the next generation.

The General Bathymetric Chart of the Oceans (GEBCO) is a joint project of the International Hydrographic Organization (IHO) and the Intergovernmental Oceanographic Commission (IOC) of UNESCO – the United Nations Educational Scientific and Cultural Organization. It is the only intergovernmental organisation with a mandate to map the entire ocean floor. It has its origins in the GEBCO chart series initiated in 1903 by Prince Albert I of Monaco, and aims to provide the most authoritative, publicly-available bathymetric datasets for the world’s oceans.

The Nippon Foundation-GEBCO Seabed 2030 Project is a collaborative project between The Nippon Foundation and GEBCO. The Seabed 2030 Project, launched at the United Nations Ocean Conference in 2017 by Chairman Sasakawa of The Nippon Foundation, coordinates and oversees the sourcing and compilation of bathymetric data from different parts of the world’s ocean through its five centres into the freely-available GEBCO Grid. Four Regional Centres cover the Southern Ocean, the Arctic and North Pacific Ocean, the Atlantic and Indian Oceans, and the South and West Pacific Ocean. These feed data products into the Global Data Centre, Southampton.

Find out more about the project and how to get involved.