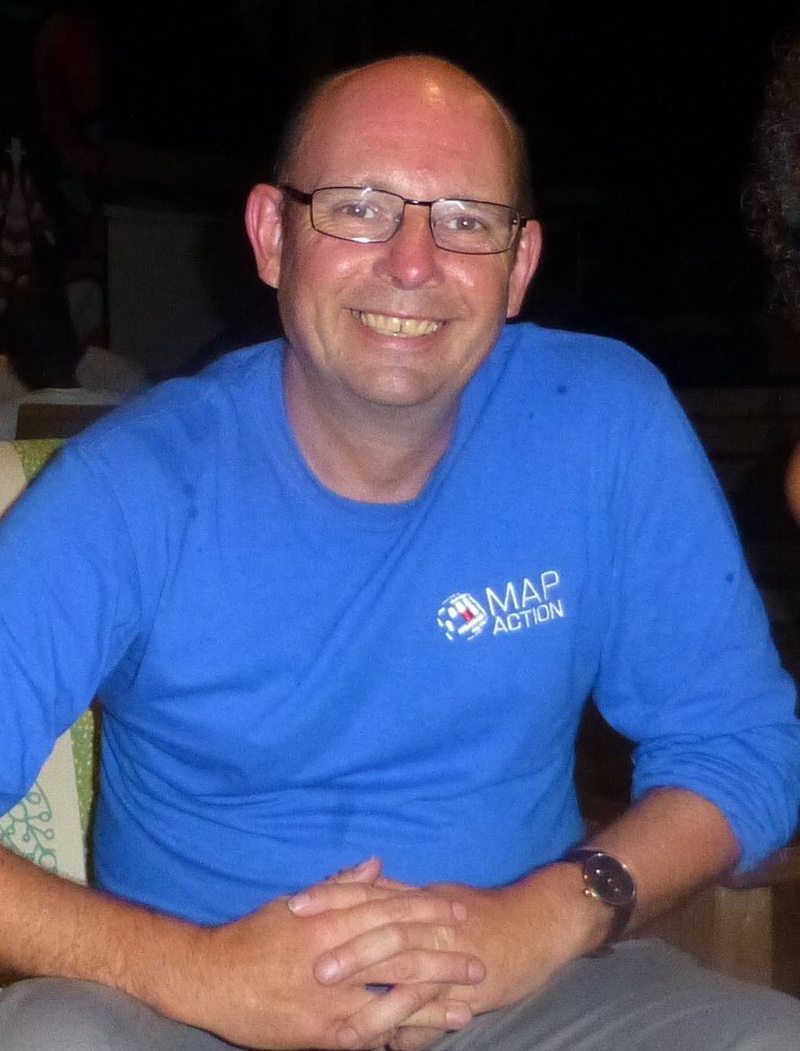 Alan Mills has been a MapAction volunteer since 2005, applying his knowledge of geospatial systems to help get aid as quickly as possible to people caught up in humanitarian emergencies. He has undertaken many emergency missions including to Beirut for the Syria crisis, hurricanes in Jamaica, the Bahamas and the British Virgin Islands, cyclones in Vanuatu and Fiji, floods in Namibia, Benin, Djibouti and Serbia, the Libyan migrant crisis and Ebola in Mali. For the past ten years, he has also coordinated MapAction’s preparedness work, helping governments and disaster management teams around the world put in place the skills and technology they need to access essential geographic information in the event of a humanitarian emergency.

As well as this, he has helped to run numerous training courses including in the Caribbean, South East Asia, Europe and Nepal and served as a Trustee of the charity from 2012-2018. In his day job, Alan runs his own consultancy business specialised in geospatial systems.

Liz Hughes joined MapAction as Chief Executive in 2013, after directing humanitarian operations at the Red Cross, Save the Children and Oxfam.

MapAction’s Chair of Trustees, Nick Moody, said “Liz has transformed MapAction. Under her inspirational and trusted leadership, the charity has greatly expanded its deployment of geospatial professional volunteers in the face of humanitarian need. She has also grown its technical and operational capability to the extent that the charity could triple its service delivery worldwide during this, the most difficult of years for humanitarian operations. None of this would have been possible however without the dedication and professionalism of volunteers such as Alan.”

MapAction volunteers are highly skilled GIS, data and information management professionals who train regularly to ensure they are always ready to travel anywhere in the world at very short notice in the event of humanitarian emergencies such as earthquakes, hurricanes, epidemics and conflict. They work to ensure that emergency response teams working in chaotic situations have all the geospatial information they need, for example; which transport routes are damaged or impassable, where there are risks of hazards such as landslides, where the hospitals and shelters are, which areas are worst affected and who is doing what and where to help.

“I was completely surprised and utterly delighted to be awarded this honour,” said Mills. “Everyone at MapAction is really committed to humanitarianism - that’s why we volunteer. Knowing that you’re saving and improving lives is reward in itself. But to be publicly recognised in this way is the icing on the cake.”

Hughes, who began her career as a social worker, has been a humanitarian for 25 years and is admired across the humanitarian sector for her leadership, integrity and achievements.

Since 2003, MapAction has been applying expertise in geographical information and data to make humanitarian disaster responses as effective as possible, saving many thousands of lives in the process. Its combination of technical knowledge and insight into humanitarian contexts, gleaned through over 100 emergency responses, gives it a unique and highly valuable understanding of all aspects of humanitarian information management.

MapAction works across the globe to ensure disaster response teams have access to the maps and data they need whenever they’re needed. As well as helping to prepare for emergencies before they happen, its team of expert volunteers is ready to respond to disasters in-country or remotely, anywhere in the world and at very short notice, to provide life-saving maps and data.

Recognised as a leading provider of humanitarian mapping services, MapAction is a long-term partner of humanitarian agencies including the United Nations Office for the Coordination of Humanitarian Affairs (UN OCHA), the UN Refugee Agency (UNHCR), the World Food Programme, Save the Children and the Missing Maps project.