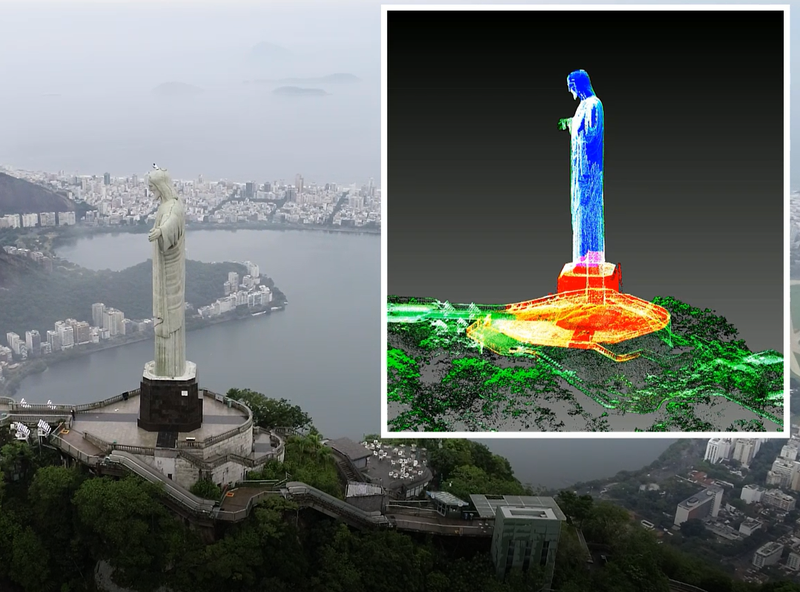 Geospatial mapping specialist GeoSLAM has produced a never-before-seen digital twin of the inside of the world-famous Chris the Redeemer statue, before its 90th birthday restoration work begins.

In 2019, it was visited over 2 million times with people from all over the globe travelling to admire the statue which soars 2,320 feet above the city of Rio de Janeiro.

Now, for the very first time, the historic statue built in 1931, can be viewed from the inside and out, using the latest SLAM (simultaneous localisation and mapping) and UAV technology.

To complete the scan, the summit of Mount Corcovado was closed to the public, allowing GeoSLAM’s Latin America Channel Manager, Gabriel de Barros Praxedes, and a small team from CPE Tecnologia, GeoSLAM’s Brazilian dealer, to scan the entire site – inside and out - within 45 minutes using the ZEB Horizon.

Emblematic of the city of Rio de Janeiro and the nation of Brazil, the concrete clad statue stands 98 feet tall and spans a mammoth 92 feet wide.

The narrow staircases and tight internal passages were captured by the versatile ZEB Horizon, which emits 300,000 laser points per second as Gabriel climbed the stairs. The same ZEB Horizon was then mounted to a UAV to capture the full, detailed exterior of the monument.

A series of 3D scans containing over 180million points was captured, producing a comprehensive digital model of the giant monument in all its glory inside and out.

The data was then quickly processed through GeoSLAM Hub, so Gabriel could see the results of the scan before he left the site, including the network of internal staircases.

Commenting on the never-before-seen feat, Gabriel, said: “Given the level of detail on this monument – from the face, hands and robe, to the staircases inside and carved marble base beneath it, I’m in awe of the capabilities of this technology and the clarity of data produced. We’ve been able to capture the statue in a totally new light, that almost no-one has had the privilege to see.

He added: “This is one of the most recognisable statues on the planet, and a symbol of hope for many Brazilians near and far, and I’m delighted to have been able to capture it in its current form before the restoration works gets underway. It’s hard to believe this statue is almost 90 years old; the scan really highlights the level of detail.”

GeoSLAM’s solutions are being used more and more to aid in the documentation and management of historic or hard-to-reach landmarks.