Redistricting: A Guide for the GIS Community - New Publication from URISA 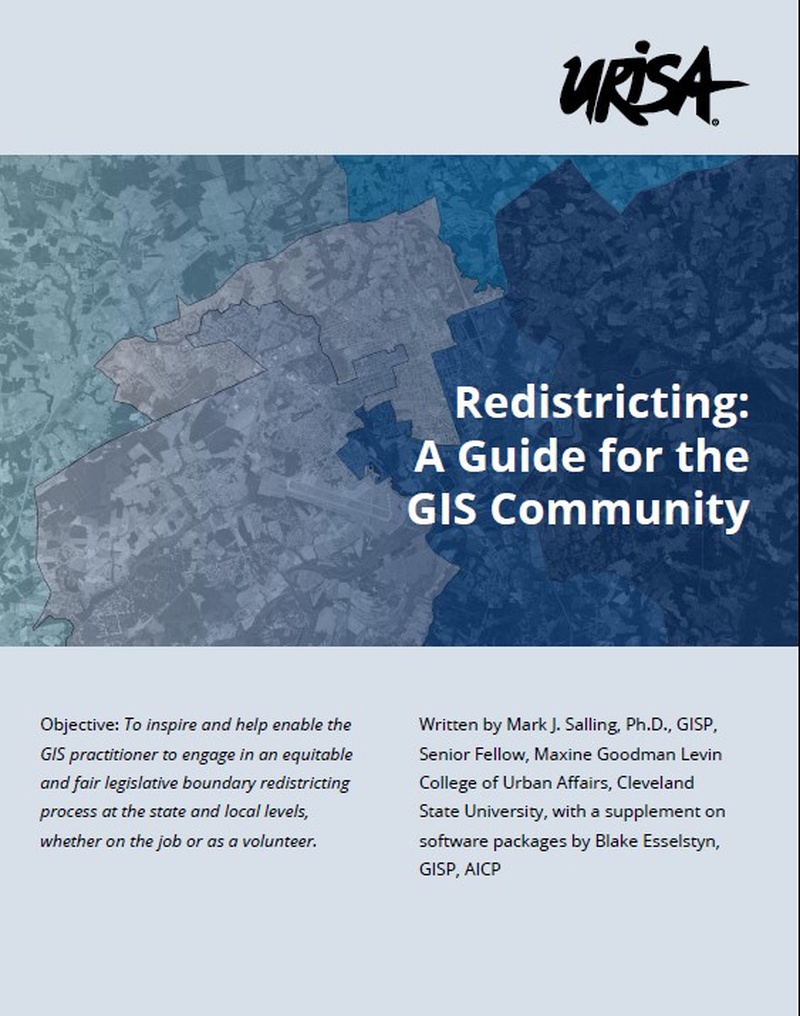 In support of the many redistricting efforts that are about to begin nationwide by the various state and local governments, the Urban & Regional Information Systems Association (URISA) has just published “Redistricting: A Guide for the GIS Community”. While the publication's principal audience is Geographic Information Systems (GIS) practitioners, it is accessible to anyone who is participating in redistricting or is interested in the process and how it can be accomplished in a fair and neutral way. URISA is a nearly 60 year old nonprofit organization which has been at the forefront on the use and implementation of GIS in local government, transportation, public heath, and private enterprise to name just a few of the applications.

It is hoped that this guide encourages GIS practitioners and others to participate in the process when possible, and it offers guidance in identifying how to do that. This guide will also be helpful to those involved in redistricting as employees of state legislatures, local governments, redistricting commissions, political parties, consulting firms, or nonprofit voting rights organizations. But other GIS experts can also contribute their skills and time either as volunteers for groups seeking to monitor and evaluate the work of the organizations charged with producing final redistricting plans for state or local communities or as independent citizens with ideas about what fair election districts should look like. More than ever before, the GIS expert can play a role in the a process so vital to our democracy.

The guide offers a primer on the process of drawing legislative districts, including discussions of constitutional and legal issues, who does it, the criteria used, the data and software tools needed, and recent changes in the process since the redistricting process a decade ago. Comprehensive in its coverage of the topic, there is a plethora of web links to other resources and in-depth treatments of issues, data, and procedures saving the user time and effort in looking for more information and help. And an indispensable supplement compares the available redistricting software systems (including stand-alone, enterprise, and web-based) to help the reader get started with deciding which one to use.

The publication was authored by long time URISA member, Mark J. Salling, Ph.D. GISP, who is a Senior Fellow in the Maxine Goodman Levin College of Urban Affairs, Cleveland State University. Though semi-retired, Dr. Salling continues an active career in applied urban geography and demography. He has more than 35 years of experience in data management and analysis and has conducted studies in urban migration, poverty, housing, economic development, voting rights, and redistricting. He led teams that developed databases used for redistricting in Ohio after the 1990, 2000, and 2010 censuses.

Dr. Salling has been active in the Urban and Regional Information Systems Association (URISA) since 1982; is a past board member; and was the editor of URISA's Conference Proceedings from 1986 to 2004. He was the recipient of URISA’s 1988 and 2000 Service Awards and was a member of the test question review team of the GIS Certification Institute (GISCI). He is a past member of the Core Committee of URISA’s GISCorps and he served on the Council of the Ohio Geographically Referenced Information Program (OGRIP), representing higher education.

The supplement on available redistricting software systems is authored by Blake Esselstyn who is a North Carolina-based geographer, demographer, and redistricting consultant who first began studying geographic information systems (GIS) more than 25 years ago. His professional experience includes over a decade working in local government as the GIS specialist for the City of Asheville Planning Department, where he served as the City’s liaison to the US Census Bureau and presented often at public meetings. He has served as an expert witness and consulting expert for multiple court cases and has been invited to speak at six North Carolina universities and several redistricting conferences in other states.

Blake earned his undergraduate degree from Yale University and his master’s degree from Penn (the University of Pennsylvania). He holds professional certifications as a GIS Professional (GISP) and a member of the American Institute of Certified Planners (AICP).

For more information and an online ordering form, visit: https://www.urisa.org/redistricting-guide