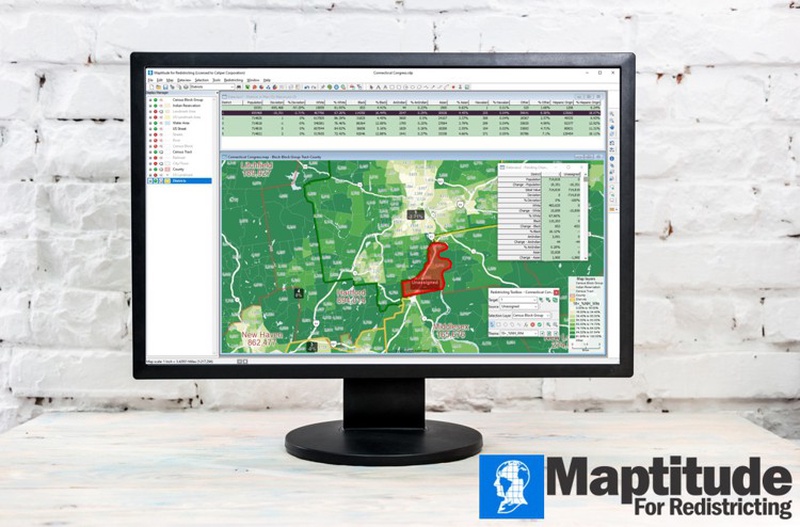 Caliper Corporation has made the first 2020 Census data available for download to its Maptitude for Redistricting users.

“The data included in the August and September deliveries will be identical. States can use either the August delivery or the September delivery as appropriate, taking their own statutes and constitutional requirements into account. The Census Bureau considers both releases to be official and fit for use.”

The full PL94-171 data set contains block level information on the U.S. population from the 2020 Census. Included are data on people's race and whether they are of Hispanic origin, for both the total and the voting age (18+) population. The Maptitude for Redistricting PL94-171 dataset is exhaustive and includes the combinations of the six racial categories.

Uniquely, the data provided for Maptitude for Redistricting includes additional fields derived from the PL94-171 data, so that it is straightforward to follow the OMB “Guidance on Aggregation and Allocation of Data on Race for Use in Civil Rights Monitoring and Enforcement” regarding multiracial identity.

Maptitude for Redistricting comes with all of the demographics for all geographic areas relevant for redistricting, allowing organizations to start line drawing immediately. The areas include:

Additional commercial and government data are also provided for use in Maptitude for Redistricting. These data include landmarks, railroads, rivers, streets, and water from Census TIGER geography and nationwide streets and landmarks from HERE.

The combination of comprehensive data, maps, and tools, all available immediately, in a ready-to-use package, makes Maptitude for Redistricting the most effective application for redistricting.

About Maptitude for Redistricting

Caliper, headquartered in Newton, MA, is a privately-held corporation and is a leading developer of mapping, redistricting, transportation, and GIS software.