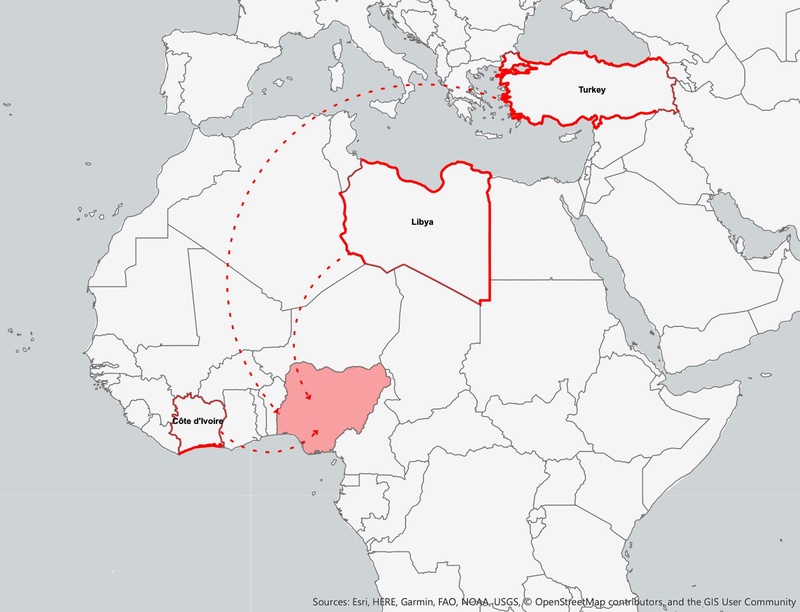 Every detail of each weapon or unit of ammunition found by CAR’s field teams working on the ground is documented to solve the puzzle of how it was diverted into a conflict zone. This data is recorded in CAR’s EU funded iTrace global weapons reporting database. CAR’s analysts then link the evidence to the problems being addressed by policy makers and submit reports to help them find solutions.

CAR published its first StoryMap using Esri’s ArcGIS Online in February 2020 to report on “Nigeria’s herder farmer conflict” derived from evidence collected through its first field study on the trafficking of weapons and ammunition to armed groups in Northern Nigeria. Rather than the data being locked in a spreadsheet, StoryMap allows CAR to tell a story, explained through three dynamic case studies, of how these groups were being armed. Using Esri’s terrain map CAR can show dynamically the movements of weapons from Turkey, from the Ivory Coast, and from the collapsed state of Libya.

CAR also uses Esri’s ArcGis capabilities for its iTrace® dashboard: the world’s largest public database on diverted weapons and ammunition into conflict zones. The dashboard now allows users to see overall documentation trends by type and country across CAR’s global operations. CAR’s analysts were able to create the StoryMap without the need for writing extra code by using Esri’s cartographic tools, such as Living Atlas. They simply created a web map, added text and images, and configured the template files to publish a fully functioning product that can be shared and viewed on any device.

Rob Perkins, CAR’s Head of Research, said: “The evidence that CAR collects is unique and can inform and shape decision making by governments. CAR’s engagement with Esri is great for that as we are able to find new and engaging tools that can take people into our data and understand our findings, and it accelerates our ability to affect positive change, which is really exciting”.

Alex Link, Customer Manager, Esri UK, said, “CAR has transformed the way it can articulate its work, its investigations being inherently geospatial and often involving complex chains of custody or international correlations between items, naturally these can be most effectively communicated through interactive mapping”.

Esri UK is the leading provider of geographic information system (GIS) technology, helping businesses become more profitable and public service more efficient through a better understanding and analysis of location-based information. Esri UK offers an extensive range of GIS technology and professional services and is the only company in the UK providing a complete and entirely integrated GIS solution.

Conflict Armament Research (CAR) documents weapons, ammunition, and related materiel at the point of use in conflict zones and traces their supply chains back to the point of origin.

Established in 2011, CAR generates unique evidence on weapon supplies into armed conflicts in order to inform and support effective weapon management and control. Through formal agreements with national governments, CAR has secured unparalleled access to conflict zones around the world. CAR field investigative teams have worked in more than 30 conflict-affected states, with ongoing operations focused on West Africa, Central and East Africa, the Middle East and North Africa, and Central and South East Asia.