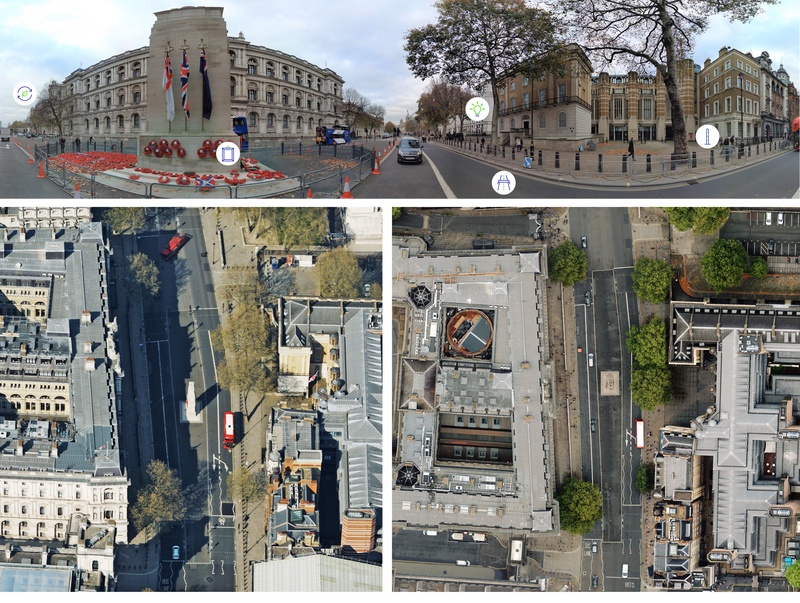 Leicestershire, 25 August 2021 – Aerial mapping company Bluesky International is working with the Dutch mobile mapping specialist Cyclomedia to bring together imagery and height data, captured from the air and at street level, to fuel a growing demand for virtual city applications in the UK.

“By bringing together two best of breed solutions, in a single platform, we are ever closer to fulfilling the growing demand for true virtual cities available from the desktop,” commented Rachel Tidmarsh, Managing Director of Leicestershire-based Bluesky International. “Cyclomedia has been a pioneer in the field of mobile mapping for 40 years and has completed projects around the world so was a perfect fit for Bluesky.”

“Working with Bluesky we can ensure that users are getting the best of both worlds,” added Duncan Guthrie, VP Europe at Cyclomedia. “We now have city-wide coverages achieved through aerial acquisition complementing street-level fidelity from our vehicle mounted sensors. Accessible through a single platform this will enhance a host of customer applications that require up-to-date, accurate, photo-realistic 3D city models.”

Bluesky provides a range of aerial imaging and remote sensing collection and processing services and is the only organisation to have current, high-resolution, full coverage of the Republic of Ireland, England, Scotland and Wales, which it maintains on a rolling, three-year update cycle. Bluesky has also upgraded its national flying programme to a minimum 12.5 centimetre resolution with urban areas now being captured at 5cm resolution simultaneously with LiDAR and oblique imagery.

Cyclomedia develops, builds and operates the world’s most advanced mobile mapping systems. A combination of sensors ranging from cameras and LiDAR scanners to state-of-the-art positioning systems map dense urban areas in Western Europe and North America. The petabytes of data that are collected every year are used by professional users, ranging from city governments to large corporates working in utilities, infrastructure and insurance.

Bluesky International operates a range of aircraft and sensors including three Ultracam Eagle Mark 3s, a CityMapper which allows the simultaneous collection of vertical and oblique imagery as well as LiDAR data, and a Galaxy LiDAR which is mounted with a thermal sensor and survey grade camera. These systems put Bluesky International in the enviable position of being able to provide customers with unique and cost-effective geospatial solutions.

Cyclomedia captures data from the real world and transforms it into valuable insights enabling you to understand the complexities of the environment around you. With the world’s most accurate 360°street-level visualizations, enhanced by innovative, AI-powered analytics, Cyclomedia delivers actionable insights that you can use today in order to build a better tomorrow.

From the outset, Cyclomedia was unique in providing large-scale and systematic visualization of physical environments using specialized technology to collect 360˚ spherical imagery from a moving vehicle. The technology concept was begun at the Technical University of Delft, conducting the initial research to develop a camera prototype in 1980.

In the 30+ years since its academic beginnings, Cyclomedia has relentless pursued a path of focused technology innovation and excellence. New developments in camera technology and innovations with 3D image capture keep the company at the forefront of the fields and in a position to help customers solve business challenges.