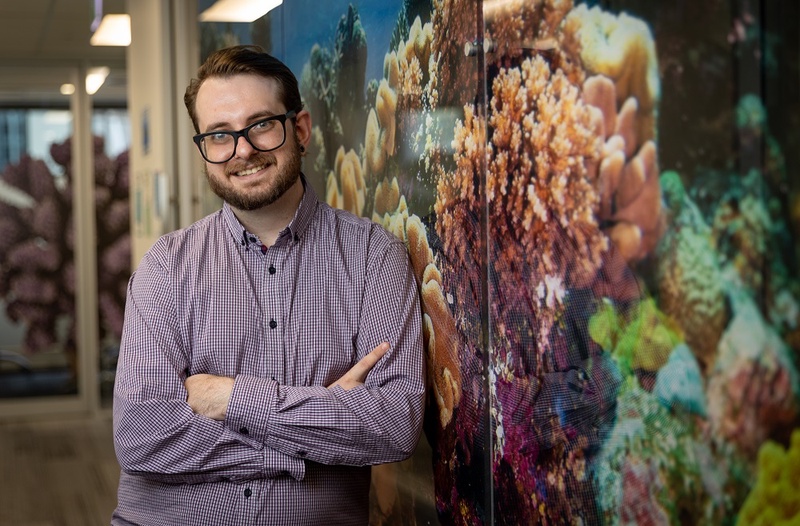 A Brisbane software developer has captured the imaginations of conservation minded millennials by creating a StoryMap to showcase the work of dozens of groups working side by side on the Queensland coast to improve Great Barrier Reef water quality.

His StoryMap Healing the scars of the land: Restoring connection between land and sea to preserve the Great Barrier Reef, highlights the work of the Great Barrier Reef Foundation and more than 60 agronomic organisations, natural resource management groups, Traditional Owner groups, land and sea care groups and researchers working from Cairns to Maryborough to stop more than 70 cement trucks of sediment a day and 450 tonnes of dissolved inorganic nitrogen each year from entering the reef.

“I am extremely humbled that I am able to bring the amazing work the Great Barrier Reef Foundation has been doing to a new digital platform to reach wider audiences, specifically younger generations as the reef is now in our hands,” Jesse said.

“When I started on the entry, I knew there had been massive coral bleaching events and that global warming was the number one cause of those events. Like a lot of people, I thought there’s not a lot I can do to make a difference.

“Now I know there are areas that have been identified where we can focus our energies to improve the health of the reef and there are people out there already doing amazing work. There are things we can do.”

Jesse’s StoryMap uses film and photos to dive beneath the ocean to visit damaged and living coral reefs and fly over gullies to reveal the impact of sediment runoff that flows from paddock to sea.

It uses data mapping technology to chart the impact of coral bleaching over three years and reports on innovative technologies that include seaweed biofilters that draw fertiliser nutrients from the water and drones and all-terrain bots with machine learning capabilities that can access and help restore hard to reach gullies and streambanks.

“We’ve got content there that’s both informative and inspiring. I wasn’t aware of the impact a project like this could have on helping to save the reef,” Jesse said.

The StoryMaps Ocean Challenge attracted entries from 20 nations in high school and young professional categories and for the first time featured a people’s choice award.

Jesse joined 18 finalists whose reports about ocean explorers, changemakers and conservation projects feature on the #myoceanstory microsite and learning hub.

Esri Australia National Business Manager Lisa Dykes said the StoryMaps Ocean Challenge was a fantastic initiative that allowed young innovators to use the pervasive language of visualised data to better understand and, more importantly, explain the world around them.

“A map allows everyone to connect with the information being shared as we see ourselves within the context of the story being told. For this generation, and those to come, the story of our oceans and climate needs to be one that is universally understood,” Ms Dykes said.

Jesse moved from GP One Consulting’s Townsville head office to Brisbane a year ago to work on a wider Great Barrier Reef Foundation digitalisation project which won awards at the recent Surveying and Spatial Science Institute Queensland awards.

“The Great Barrier Reef is coming under increasing pressure from a growing combination of threats, including poorer water quality from sediment run-off and pollution. Our generation holds the Reef’s future in its hands. The actions we take now will secure the future of this irreplaceable ecosystem,” Ms Marsden said.

“Queensland and agricultural communities are already undertaking a high calibre of work to safeguard the future of the Reef and we’re proud to partner with them to continue to improve the quality of the Reef’s waters.”

GP One Consulting founder and director Gareck Packer was proud of his young software developer.

“Jesse worked hard to bring a project to fruition that showcases the good work being done by the dozens of groups collaborating with the Great Barrier Reef Foundation to improve the quality of water flowing to the Reef,” Mr Packer said.

Esri is a global market leader in Geographic Information Software (GIS) technology. Esri software is deployed in more than 350,000 organisations.

Esri Australia is the nation’s leading GIS technology and service provider and exclusive supplier of ArcGIS technology, which includes the ArcGIS StoryMaps application used by contestants to create their entries.

The work featured in the StoryMap is part of a $141 million program which consists of more than 60 organisations working to improve water quality in high priority catchments. This is funded by the Great Barrier Reef Foundation’s partnership with the Australian Government’s Reef Trust.