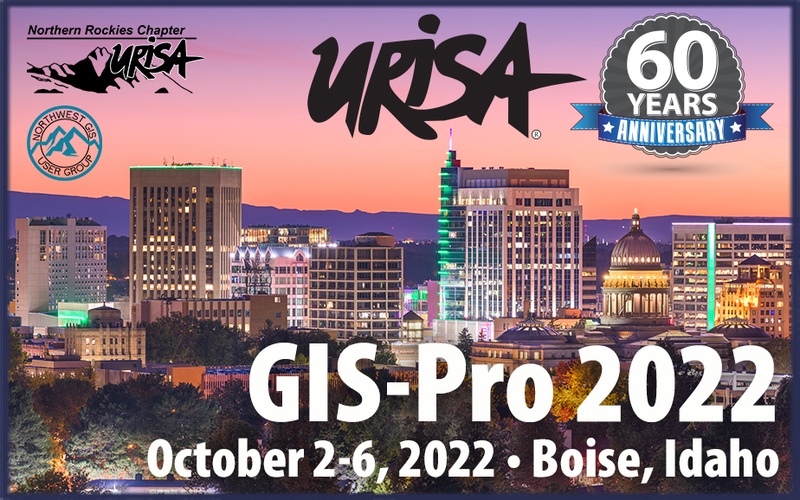 More than 420 GIS professionals recently convened in Boise, Idaho for GIS-Pro 2022, URISA's 60th anniversary conference. The milestone event was co-hosted by the Northwest GIS User Group and the Northern Rockies Chapter of URISA.

During the Awards Luncheon, the 2022 Exemplary Systems in Government (ESIG) Award winners were celebrated. The recipients were announced in August. Be sure to take some time to review the videos submitted by the winning systems since that announcement. The videos debuted during the celebration and have since been posted online.

A number of URISA leaders were recognized for their volunteer service during the conference in Boise. We congratulate and thank all honorees for their amazing contributions to the community!

Leadership Award: Presented to members who have demonstrated exemplary leadership to URISA, creativity, innovation, and dedicated support of URISA programs. The recipient should be a member of URISA for enough years to show a pattern of leadership. Typically, the recipient will have been responsible for new programs or activities, or significantly enhanced an existing activity or program, so that it takes URISA in a new direction and/or enhances our standing in the professional community.

Service Award: Presented to members who have demonstrated faithful service to URISA and participation in its program over a period of several years. This award is for specific service to URISA. It should require a significant number of years of (not necessarily consecutive) service in a number of programs or committees, and a willingness to take on challenges without regard to the potential for recognition.

Barbara Hirsch Special Service Award: Presented to members or staff who have made special contributions to URISA. This award was created (in 2004) to honor URISA’s former Chief Financial Officer, Barbara Hirsch. Barb made her mark at URISA by being an exceptional professional who would always step forward when a point needed to be made, but never stepped to the front for recognition. It is in the spirit of this dedication that the Board of Directors has created an award for special service to URISA. This award will be given to individuals or committees who have shown a similar consummate level of service to URISA through an ongoing commitment to our success as an organization.

Chapter of the Year:

The URISA Texas Chapter was the repeat recipient of this year’s Outstanding Chapter Award. The chapter celebrated their ten-year anniversary this year; greatly expanded their scholarship program; and continued to offer very well-attended monthly speaker series webinars. The chapter modernized their branding, offered new education and networking opportunities and increased their URISA membership by 210%!

During the luncheon, our co-hosts also recognized outstanding volunteers. The Northwest GIS User Group celebrated Keith Massie and Jesse Manley with Board Service Awards and the Northern Rockies URISA Chapter recognized Wilma Robertson with an Excellence in GIS Award for her contributions and dedication.