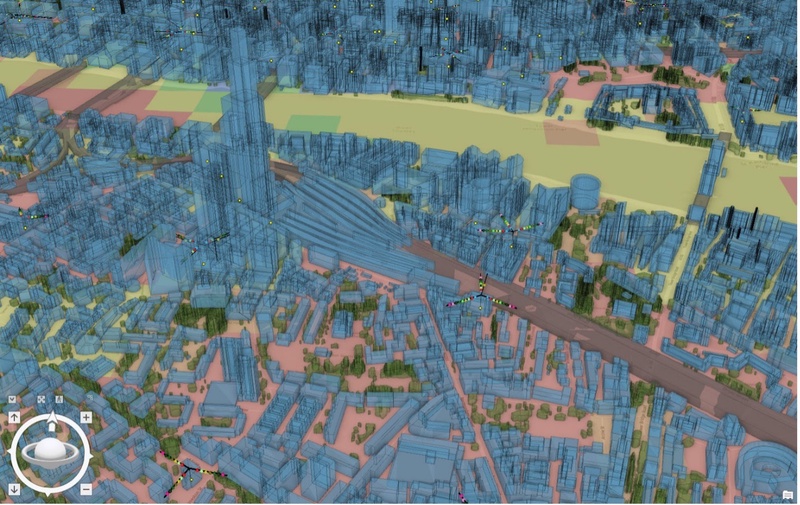 Vodafone has created a 3D digital twin of its UK mobile mast network to allow its engineers to visualise and strategise network improvements or expansion. It will allow them to make instant decisions to improve services to customers without leaving their desks.

The digital twin involved mapping more than 40 million environmental features using advanced software from Esri, including buildings, hills, valleys and trees. Engineers now have access to a 360-degree virtual view of the network from their laptop or mobile device over a secure connection. They can plan where to position new mobile sites more effectively and identify which ones need upgrading or repositioning to meet increases in customer demand, or to compensate for the construction of new buildings or tree growth.

Dr. Rebecca King, Geographic Information System (GIS) Lead at Vodafone, explained: “A customer’s mobile phone might cut out due to what we call clutter. This is usually down to the construction of new buildings or seasonal tree growth interfering with the signal strength. We like to visualise these in a digital format so that we can better plan the expansion of our network around them.”

Approximately 500,000 network features such as antennas, along with billions of rows of network performance data can be visually presented. With a few clicks, an engineer can inspect a component of a mobile base station remotely before deciding whether to jump in their van and drive to the site to carry out any necessary work.

The company is now looking to test a similar digital twin service in other markets, including Germany and Turkey, and is exploring options to create an intelligent online replica of both its mobile and fixed broadband networks.

The digital twin is the latest addition to Vodafone’s expanding digital network locker.

Boris Pitchforth, Lead Architect at Vodafone, said: “The digital twin gives us an unprecedented understanding of our entire UK mobile network – it is like Minecraft for data scientists.

“We can be smarter and faster about how and where we add new 5G features, and target capacity increases with greater precision. There’s also the added benefit of being able to reduce our carbon footprint as our engineers won’t need to make as many site visits, especially to masts in remote areas.”

Working with the UK arm of Esri, a global leading Geographic Information System (GIS), location intelligence and mapping company, Vodafone used satellite data to map the terrain, including land use such as crops, transport links and height data of neighbouring objects. “The digital twin doesn’t need to exactly replicate objects in the real world such as the individual bricks of a building, only its dimensions, so that we can angle the signal to give customers the best possible connection. The simpler the map is, the faster it loads,” added Boris Pitchforth.

“Using ArcGIS Enterprise has allowed us to add the spatial dimension to a lot of data we were already working with, resulting in new levels of location intelligence,” continued Dr Rebecca King. “Through our digital twin, data can now be visualised in 3D and shared easily with multiple teams.”

In addition to introducing the digital twin to other countries, Vodafone also plans to use it to support the rollout of new network features such as Massive MIMO – providing more capacity at a single cell site – to meet the proliferation of connected devices, which are predicted to grow globally to 30 billion by 2025.

“A few years ago, a national digital twin of this type simply wasn’t possible,” said Boris Pitchforth. “But the combination of ArcGIS Enterprise in AWS (Amazon Web Services) cloud means large-scale digital twins can be a reality, providing a secure, scalable cloud option for enterprise data visualisation and geospatial analytics. Similar projects in the utilities sector, for example, traditionally focus on smaller areas but we wanted a national model in line with our network.”

The move forms part of Vodafone’s Tech 2025 strategy to automate large parts of its pan-European network to be able to rapidly respond to customer demand where it is needed most. 70% of the company’s core European network is already running on Vodafone’s own, ‘on premise’ cloud, and this will increase to 100% by 2025. This gives Vodafone a software-driven platform from which to launch universal products in many markets at the same time, as well as predict and dynamically meet future demand.

A common data ocean connecting all Vodafone markets uses advanced AI and Machine Learning to empower tens of thousands of its employees. They can plan and operate the networks, intelligently manage data centre cooling, and dial-down the power at mobile sites during off-peak times.