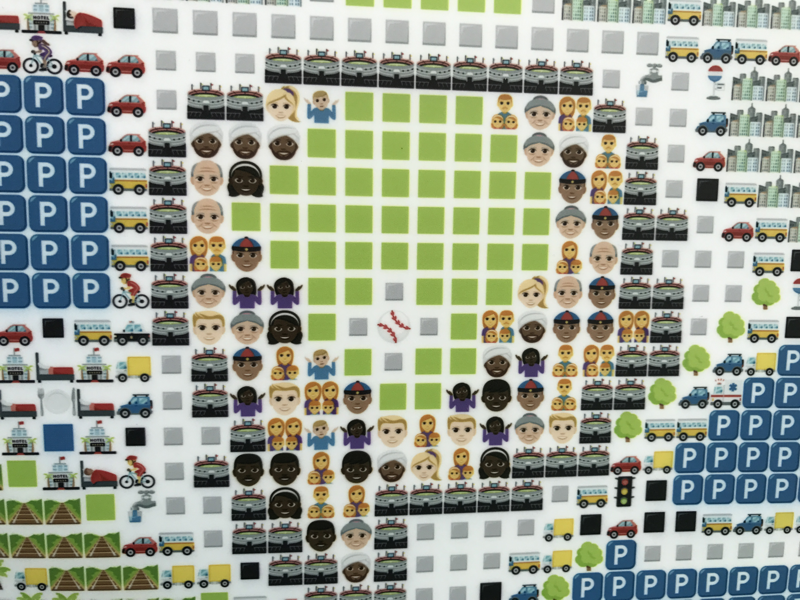 The map represents a 4km x 4km area covering the Gas Lamp Quarter in the south up to the airport, Balboa Park and the world-famous San Diego Zoo. Over 330 different emoji characters were utilised, including those supporting diversity. The map-building process was primarily data driven with research using satellite/aerial imagery for areas with unknown land use. Some fun and mischievous features were added, including a unicorn and “Bob” the zombie – both set as challenges for viewers to find.

Europa Technologies also exhibited an Emoji Map of the World. This map was a blank map of the world, based on Europa Technologies own data products, where attendees could place emoji stickers at locations significant to them. By the end of the conference, the map was heavily populated with several hundred contributions.

Warren Vick, Founder & Director of Europa Technologies, and the designer of both maps, said “I’m delighted that our Emoji Map of San Diego was such a hit at the Esri User Conference. It was wonderful to hear so many kind comments about the work from both locals and fellow visitors. Our Emoji Map of the World was also a great success and, with so many attendee sticker contributions, it is a fantastic souvenir of this year’s conference.”

July 17 is informally designated World Emoji Day since it is the date commonly featured on the calendar emoji.

Europa Technologies is an award-winning specialist in geospatial intelligence solutions for a wide variety of market sectors. Our capabilities allow organisations with international interests to better understand their customers, assets and markets, in a geographic context, thereby gaining a competitive or strategic advantage. Digital map products and services from Europa Technologies are used by many Fortune Global 500 companies, governments and missions of the United Nations. The company has global licence agreements with several leading Internet-based service providers including Google. Through deployment via Google Earth and Google Maps alone, our world data products have been seen by over one billion people, approximately 1 in 7 of the world’s entire population. The company’s identity is captured in its mantra: “Success, located”.