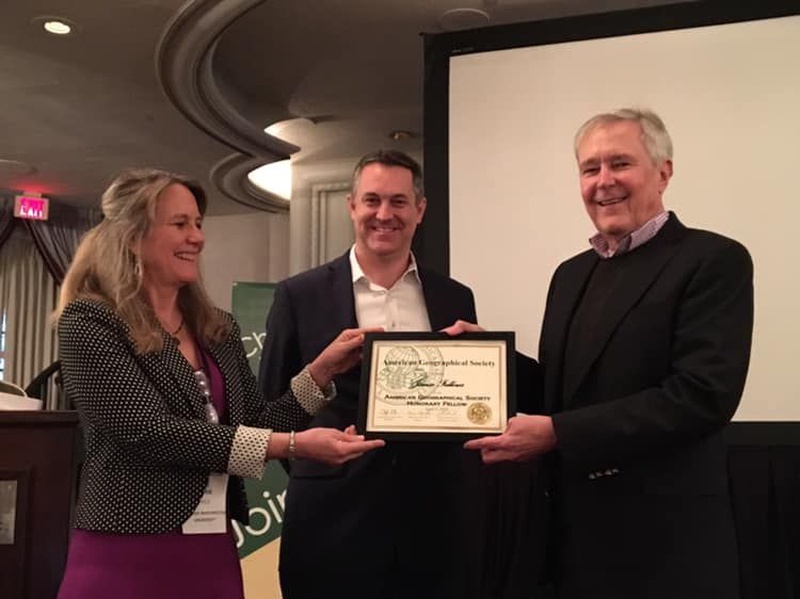 New York City, NY – April 8, 2019 — The American Geographical Society (AGS) awarded Mr. James Fallows an Honorary Fellowship at the annual meeting of the American Association of Geographers (AAG) in Washington, DC on April 5, 2019. Mr. Fallows received the award following his lecture, " Our Towns: The Surprising New Geography of America .” The AGS Honorary Fellowship, awarded by the American Geographical Society (AGS), is one of several prestigious honors given by the Society, and is bestowed on individuals who have made significant contributions to the field of geography.

Mr. James Fallows is a national correspondent for The Atlantic since the 1970’s. Throughout his career, Fallows has lived and reported extensively from outside the United States. His most recent work, Our Towns: A 100,000-Mile Journey Into the Heart of America , takes the reader on an exploratory journey through small-town America, highlighting the inherent cultural, political and economic geography of each region. In addition to his cultural piece, Fallows has authored a number of award winning books and articles including, National DEfense and “ Iraq: The Fifty-First State .” His other works, Blind Into Baghdad (2006) and Postcards From Tomorrow Square (2009) are based on his writings for The Atlantic. He received his undergraduate degree in American history and literature from Harvard, and a graduate degree in economics from Oxford as a Rhodes Scholar.

Dr. Deborah Popper, AGS Vice President and chair of the AGS Honors and Awards Committee, notes, “I've benefited from reading James Fallows' work since the '70s. He's got a range, depth, and humanity that helps us understand places in themselves and their place in larger national and global systems.”

The American Geographical Society is a 21st-century learning society dedicated to the advancement of geographic thinking, knowledge, and understanding across business, government, academe, social sectors, and most importantly with teachers and students. Established in 1851, AGS is the oldest professional geographical organization in the United States. It is recognized worldwide as a pioneer in geographical research and education for over 168 years. The mission of AGS is to advance and promote geography in business, government, science, and education. Our goal is to enhance the nation’s

geographic literacy so as to engender sound public policy, national security, and human well-being worldwide. AGS seeks to engage the American public, from its youngest to its oldest citizens, with new and amazing ways to understand and characterize our changing world. The Society maintains its headquarters in New York City.