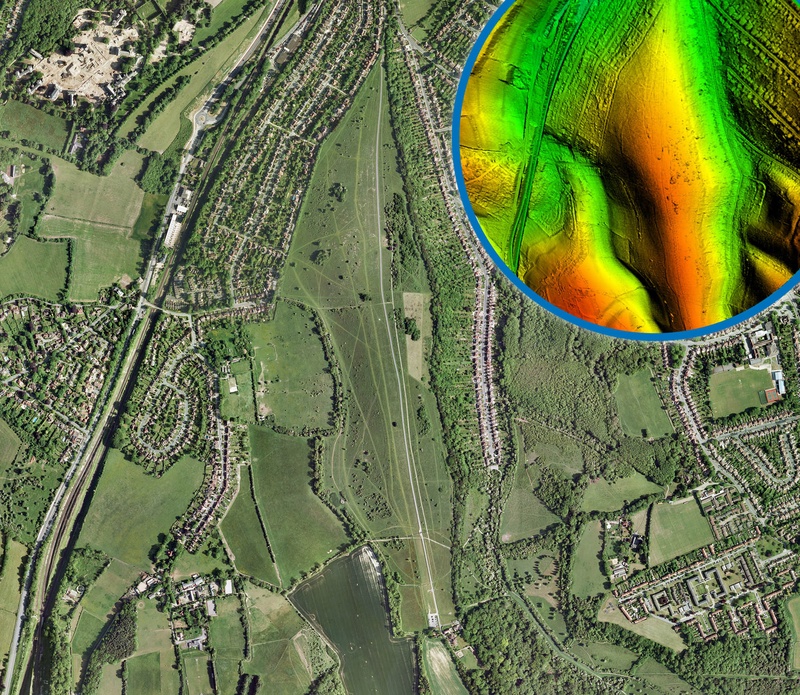 Leicestershire, UK, 24 October 2019 – A detailed laser mapped aerial survey from Bluesky is helping the City of London Corporation understand and plan for the future of London’s most extensive, natural grassland. The historic environment assessment of Farthing Downs was completed by the Museum of London Archaeology (MOLA) and will form the first stage in the preparation of a Heritage Conservation Management Plan for the Site of Special Scientific Interest (SSSI).

Using the LiDAR data from Bluesky, alongside historic maps, geological data, archaeological reports and aerial photographs, researchers were able to identify a number of features including evidence of post-medieval farming techniques, Later Iron Age earthworks and Second World War bomb-craters. The desk-based study which assessed buried heritage assets (archaeological remains) concluded that survival across the site is likely to be moderate to high and the findings will provide background data for a more detailed field walkover survey.

“LiDAR data is an excellent tool for archaeological studies as it is non-invasive, can penetrate ground vegetation that may obscure evidence of historic activity and is also highly accurate,” commented Rupert Featherby, Lead Consultant (Archaeology) at MOLA. “Working with Bluesky we were able to capture a detailed 3D record of the whole site which, using our desktop mapping software, we could review to identify a range of features.”

The Bluesky LiDAR was captured to a resolution of 50 cm across the site located in Coulsdon in the London Borough of Croydon. Supplied to MOLA as a mosaic dataset, researchers rendered the Bluesky data using ArcMap desktop geographical information system (GIS) software. Using the ‘hillshade’ option 3D models (Digital Elevation and Digital Terrain Models DEM / DTM) were created and illuminated from different directions and angles to identify both negative features such as ditches and pits and positive features such as banks or moulds.

As part of an ongoing review of land management there is a need to identify, assess and manage the historic environment and so the City of London Corporation commissioned MOLA to carry out the assessment baseline of heritage assets at Farthing Downs and the New Hill Commons. The site forms part of the South London Downs, London’s newest National Nature Reserve, and is recognised nationally for the preservation of archaeological features and historic landscapes. Not only do the Commons contribute to the understanding of the time depth and development of the landscape but also to the distinctiveness of each of the landscapes.

In order to capture highly accurate LiDAR (Light Detection and Ranging) data a survey aircraft equipped with a system of lasers is used. Lasers are transmitted to the ground and the time taken for the beam to be bounced back to the aircraft-mounted receivers is recorded. Using the known position of the aircraft (derived from on-board satellite positioning equipment), the time taken for the return of the laser beam and the known value of the speed of light, the distance between the aircraft and ground is calculated.

Readings can also be taken to determine the height of buildings, vegetation and other surface structures such as above ground pipelines, highways, street furniture, power lines and railway tracks.

Bluesky is one of the leading and most successful aerial survey and geographic data companies in the UK producing and maintaining seamless digital aerial photography and height data on a national scale in both Great Britain and the Republic of Ireland.

Bluesky operates the worlds most advanced airborne sensor, which comprises vertical and oblique cameras as well as a LiDAR, to create accurate and detailed virtual cities. Bluesky also operates the only LiDAR system in the world that incorporates a thermal sensor and survey grade camera. These combined with other systems puts Bluesky in the enviable position of being able to provide customers with unique and cost-effective geospatial solutions.

As well as being an established and respected aerial survey company Bluesky is also highly innovative and continually strives to develop new products and services by embracing new technology and methods. This has resulted in the development of some unique products such as the National Tree Map (NTM).

These datasets underpin long term contracts with local and central governments and many major blue-chip companies from a range of market sectors including financial services, utilities, telecoms, web portals, construction and environment.

Bluesky has offices in the UK, US, Republic of Ireland and a dedicated production centre in India.

The City of London Corporation is the governing body of the Square Mile dedicated to a vibrant and thriving city, supporting diverse and sustainable London within a globally successful UK.

The City Corporation protects and conserves 18 green spaces in London and south east England and over 200 smaller ones in the Square Mile. They include important wildlife habitats, sites of Special Scientific Interest and National Nature Reserves. They are protected from being built on by special legislation. Most of its sites, which are run as charitable trusts, are run at little or no cost to the communities that they serve. They are funded by over £29million a year from the City of London Corporation, together with donations, sponsorship, grants and income generated on site.