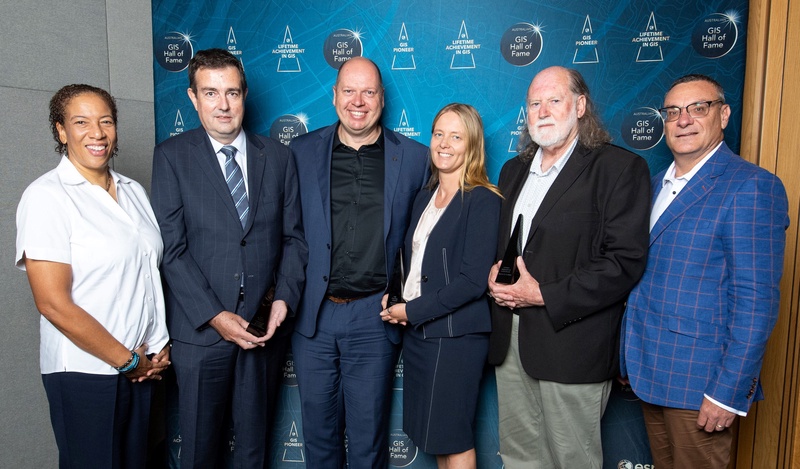 Four trail-blazing industry leaders that have used cutting-edge technology to address some of humanity’s biggest challenges have today been recognised at the inaugural GIS Hall of Fame awards in Brisbane.

From providing critical data to aide frontline response to the devastating bushfires burning across Queensland, to underpinning a global project to map the ocean’s floor – the 2019 award winners have innovatively used Geographic Information System (GIS) technology to make a real difference to the community and grow Australia’s multi-billion dollar geospatial industry.

Geoscience Australia and Queensland’s Department of Natural Resources, Mining, and Energy (DNRME) were presented with GIS Pioneer Awards for their extraordinary leadership in both the application and advancement of the science of GIS.

Lifetime Achievement in GIS Awards were presented to Martin Rutherford, the Department of Defence’s Director of Maritime Geospatial Intelligence; and, Gary Maguire, Director of StateStat at the South Australian Government – for their unparalleled commitment to industry innovation.

“Thousands around the country use GIS technology on a daily basis – however today’s award recipients have an unmatched record of contributing to the advancement of science, demonstrating creative thinking, inspiring leadership and most importantly community mindedness,” Mr Bundock said.

“Geoscience Australia’s ground-breaking work in the search for missing Malaysian Airlines flight MH370 has seen them take a pioneering role in the Seabed2030 project, which aims to map the world’s entire ocean floor in high resolution by 2030.

“DNRME have set the benchmark for creating world-leading open data platforms that break down traditional barriers for government agencies, commercial organisations and the community to have self-serve access to meaningful public data.”

“The department has striven for the last 30 years to be at the forefront of the use of GIS technologies, to improve decision making not only within government and private organisations but also to empower the public,” Mr Jacoby said.

“Across QldGlobe, QSpatial and QImagery, this team provides around 500 services a second, catering to anything from an address check, to searching for an image or just checking on the globe – and we’re only getting busier.

“The growth and the success of the department in this area can only be put down to the incredible work of countless individuals over the past 3 decades, helping us to grow, shape and develop a culture that gets the right information to people, when and where they need it.

“We recognise this is an ongoing challenge and the public’s expectations will only grow. I am very confident that the DNRME team will continue to meet the high standards acknowledged by this Award and we look forward to working further with Esri Australia to improve the delivery of Queensland’s critical spatial information.”

The official Awards Ceremony for the inaugural Australian GIS Hall of Fame was held on Wednesday, 20 November 2019 at Brisbane Convention and Exhibition Centre.

Further information on the awards and winners is available at: esriaustralia.com.au/HoF