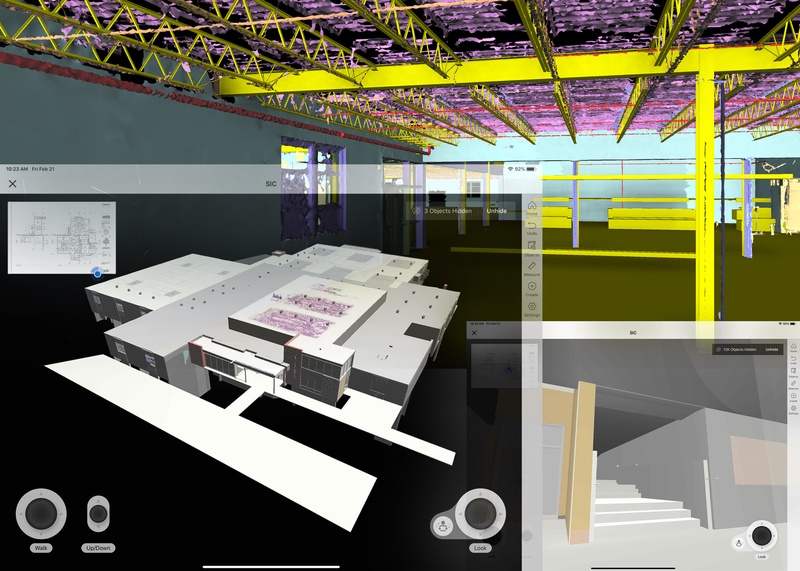 Used to convert vast point clouds generated by laser scanners and photogrammetry, Pointfuse creates manageable, intelligent mesh models that automatically classify building features, aid in clash detection, and other construction processes – all in small, portable files that can be up to 100 times smaller than the original point cloud.

This level of product integration provides for a seamless union of technologies resulting in considerable project cost savings.

“Laser scanning is increasingly being used on construction projects to capture detailed and accurate records during the different build stages,” commented Charles Goin, VDC Manager at Shockey. “However, the resulting point clouds are huge, unwieldy, raster files that are hard to use, and require specialized BIM and VDC software to utilize.”

Shockey initially used Pointfuse on a $13.7m adaptive reuse project in Virginia, which will result in the creation of a 46,400 square foot career and innovation center. Following demolition work and the removal of suspended ceilings, the project was scanned in just 2 hours using a Leica BLK360 laser scanner. The result was a 9GB file composed of 900 million measurements and 19 3D panoramic HDR images.

“Using Pointfuse, we converted the point cloud into a vector cloud-based model and were able to classify major existing systems such as structural and MEP. This process not only improved the usability of the data, but it also reduced the cloud size to under 80MB from 9GB, a factor of over 100. We then combined the as-built Pointfuse model with the design model to run clash detection and improve coordination with the other subcontractors,” continued Goin.

Comparison of the Pointfuse model with the original Revit model highlighted areas where the as-builts deviated from the design; allowing the Shockey team to immediately identify additional structural concrete forms, and changes in the size and spacing of the joists (which impacted architectural treatments and finishes) along with other services such as HVAC, MEP, and fire safety.

Following this discovery, Shockey shared the Pointfuse model with the designers and subcontractors who were already using 3D models for coordination and informed the mechanical contractor (as changes to the planned HVAC system would be required). This discovery also allowed for the modification and integration of the existing sprinkler mains into the new fire safety system to save costs.

“The most exciting result from creating the vector cloud using Pointfuse was the ability to democratize the scan data. We were able to upload the model into our cloud-based construction management software Procore, and its VDC Model module, thereby allowing everyone on the team from the Architect to Field superintendent to view the scan data simply via an App on an iPad or iPhone.” concluded Goin.

With over 120 years of experience, Howard Shockey and Sons, Inc. is one of Virginia’s oldest and largest construction companies. Offering a complete range of services including preconstruction, general contracting, construction management, design-build, and integrated project delivery, Shockey has completed high profile projects in the academic, healthcare, senior living, commercial, and industrial markets.

Pointfuse is a powerful modeling engine that delivers an automatic, precise, and flexible way of converting the vast point cloud datasets generated by laser scanners or photogrammetry into segmented mesh models. Pointfuse uses advanced statistical techniques to create 3D models where individual surfaces can be selected and classified as new layers in the Pointfuse environment and exported to IFC and FBX for manipulation in any industry-standard CAD system.

Pointfuse also significantly reduces the file size of 3D models created from point clouds. In simple terms, the data density within each surface is reduced while still maintaining the fidelity of the model. Resulting in a significant reduction in model size, making ongoing use of the model more accessible, faster, and more efficient.