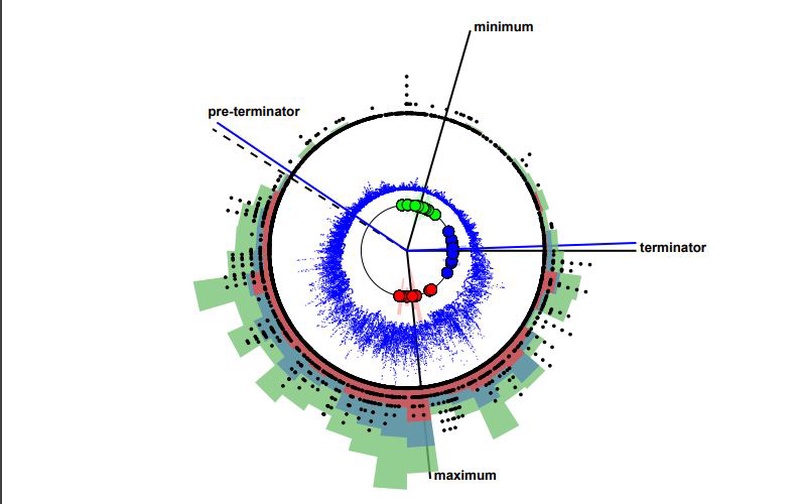 Extreme space weather events can significantly impact systems such as satellites, communications systems, power distribution and aviation. They are driven by solar activity which is known to have an irregular but roughly 11 year cycle. By devising a new, regular ‘sun clock’, researchers have found that the switch on and off of periods of high solar activity is quite sharp, and are able to determine the switch on/off times. Their analysis shows that whilst extreme events can happen at any time, they are much less likely to occur in the quiet interval.

The clock will help scientists to determine more precisely when the risk for solar storms is highest and help to plan the impacts of space weather on our space infrastructure, important since the next switch on of activity may be imminent as solar activity moves from its current minimum.

Published in Geophysical Research Letters by a team led by the University of Warwick, the sun clock uses the daily sunspot number record available since 1818 to map solar activity over 18 solar cycles to a standardised 11 year cycle or ‘clock’. No two solar cycles are the same, but using a mathematical technique known as the Hilbert transform, the researchers were able to standardise the solar activity cycle for the first time.

The clock revealed that the transitions between quiet and active periods in solar activity are sharp. Once the clock is constructed from sunspot observations it can be used to order observations of solar activity and space weather. These include occurrence of solar flares seen in X-ray by the GOES satellites and F10.7 solar radio flux that tracks solar coronal activity. These are all drivers of space weather on the Earth, for which the longest record is the aa index based on magnetic field measurements in the UK and Australia going back over 150 years. All these observations show the same sharp switch on and switch off times of activity.

Once past switch on/off times are obtained from the clock, the occurrence rate of extreme events when the sun is active or quiet can be calculated.

Lead author Professor Sandra Chapman, of the University of Warwick’s Centre for Fusion, Space and Astrophysics, said: “Scientists spend their lives trying to read the book of nature. Sometimes we create a new way to transform the data and what appeared to be messy and complicated is suddenly beautifully simple. In this instance, our sun clock method showed clear 'switch on' and 'switch off' times demarcating quiet and active intervals for space weather for the first time.

“Large events can happen at any time, but are much more likely around solar maximum. By cleanly ordering the observations we find that in 150 years of geomagnetic activity at earth, only a few percent occur during these quiet conditions.

“The ability to estimate the risk of a future solar superstorm occurring is vital for space and ground-based technologies that are particularly sensitive to space weather, such as satellites, communications system, power distribution and aviation.

“If you have a system sensitive to space weather you need to know how likely a big event is, and it is useful to know when we are in a quiet period as it allows maintenance and other activities that make systems temporarily more fragile.”

The research was co-authored by Scott Mcintosh of the National Center for Atmospheric Research and Robert Leamon of the University of Maryland and NASA's Goddard Space Flight Center:

Robert Leamon said: "The Hilbert transform is a really powerful technique across all of science. Sandra suggested it to me on a completely different project - this really is a serendipitous chain of events - because of her work in lab fusion plasmas, and when we applied it to sunspots, we saw it tied to the sharp switch-on of activity that we'd seen elsewhere. Sandra then saw the switch-off looking at the aa index."

Scott Mcintosh said: “We foresee that the door that this innovative work opens will lead to development of meaningful climatologies for solar activity and improved predictability that will result from that.”

Image : Multiple cycles of the irregular, but roughly 11 year cycle of solar and geomagnetic activity is mapped onto a regular solar cycle clock with increasing time read clockwise. Circles indicate the cycle maxima (red), minima (green) and terminators (blue). Measures of solar activity are the daily F10.7 solar radio flux (blue), and GOES X-class, M-Class and C-class solar flare occurrence plotted (red, blue and green scaled histograms). Extreme space weather events at earth seen in the aa geomagnetic index are shown as black dots arranged on concentric circles where increasing radius indicates aa values which in any given day exceeded 100, 200, 300, 400, 500, 600nT, large events appear as ‘spokes’. The clock identified when activity switches on at the terminator and switches off at the pre-terminator (blue lines).