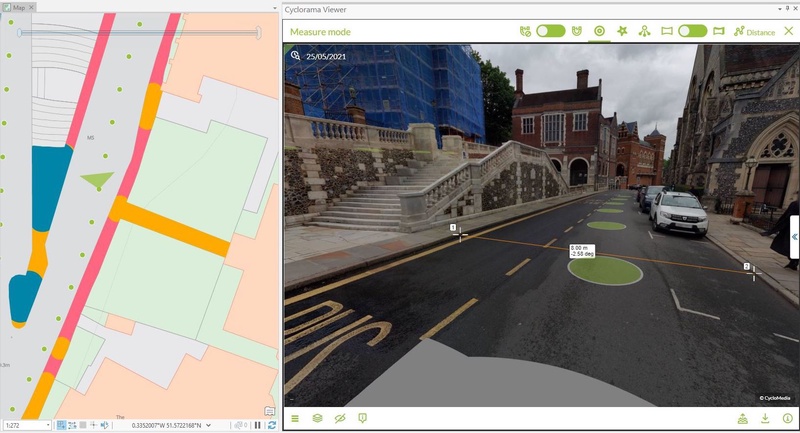 The London Borough of Harrow has added high definition street-level imagery and LiDAR data to its Esri UK corporate GIS system, giving staff access to a highly accurate digital twin of the borough.

Part of Harrow’s strategy to explore new digital approaches and advance its digital twin agenda, the move is designed to improve the efficiency of various tasks in planning, highways and Council Tax and reduce the overall need for physical site visits.

Provided by Esri UK partner Cyclomedia, the new imagery and associated LiDAR data provides a full 3D digital representation of the environment and can be viewed simultaneously alongside other geospatial data within the Esri GIS, such as street furniture, council tax records, planning applications and Ordnance Survey data.

The new imagery will mean Planning can view properties alongside planning applications, Highways can verify that street works have been delivered or plan new mobility schemes, such as cycle lanes, while the Council Tax department can carry out remote property inspections. Users can also apply the various analysis tools within the Esri GIS system to the imagery, such as accurate measuring of properties or boundaries and viewshed analysis, to determine where shadows may fall from future developments, for example.

Harrow previously relied on other sources of street level imagery but wanted more accurate, higher resolution and timely information to provide a true virtual understanding of its local area. Esri UK brought in partner Cyclomedia to help solve the challenge. Cyclomedia data is captured by its fleet of 100 megapixel camera cars and includes roads in Harrow which were not covered by the previous street imagery.

“The Cyclomedia data helps us achieve a digital twin, easily accessible within our Esri GIS to make remote decision-making easier for staff, right across the organisation in numerous departments,” explained Sam Tizzard, head of GIS at London Borough of Harrow. “High resolution, current and time-stamped imagery along with LiDAR data gives us a reliable digital twin of the borough that we can trust, vital in carrying out effective management, maintenance and planning. It also helps to dramatically reduce site visits, which is essential as new hybrid working methods evolve to help keep staff and the public safe due to Covid-19.”

Harrow has been a customer of Esri UK’s for over 15 years, using Esri’s GIS system in multiple departments. “This is the first UK example of Cyclomedia and Esri GIS integration so we’re looking forward to helping Harrow explore the possibilities of what this innovative project can deliver in coming months,” said Paul Clarke, head of government at Esri UK.

“Local governments are being asked to make important decisions about their dynamic urban environments, together with increased remote working, an accurate digital model enables decisions to be made objectively,” said Fergus Craig, UK Sales Manager, Cyclomedia.

Other city governments which are already benefitting from the use of Cyclomedia’s best-in-class imagery and LiDAR data include New York, Amsterdam, Paris and Frankfurt. Cyclomedia solutions make cities safer, greener, more accessible and smarter, helping companies to make the right decisions based on actual and accurate data.

Cyclomedia, Esri UK and the London Borough of Harrow will be discussing the benefits of using 3D digital representations of the urban environment, in a webinar on Thursday 16 September 2021 at 9.30-10.30am, using various examples.