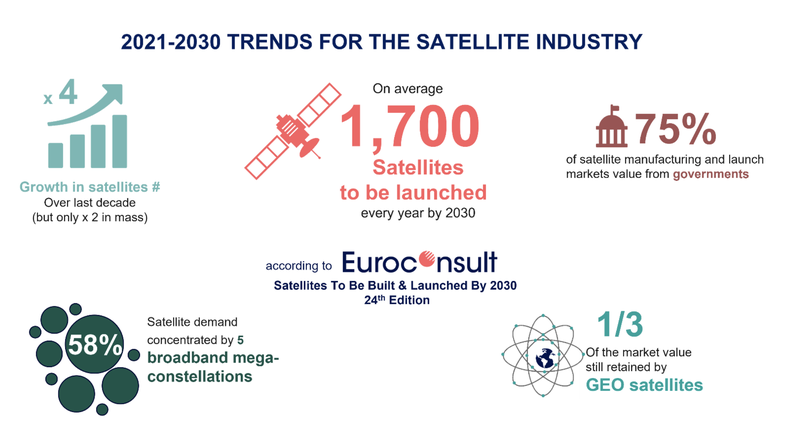 Euroconsult’s latest “Satellites to be Built & Launched” report takes stock of prospects for the satellite market as the most severe elements of the pandemic show signs of subsiding. After two years of record satellite launches, Euroconsult confirms the transition to a new engineering and business paradigm for space driven by fast-growing constellations of small satellites and growing activities of the government worldwide.

Paris, Washington D.C., Montreal, Yokohama, Sydney, Toulouse, 8th December – Euroconsult has released its “Satellites to be Built & Launched” report for 2021, the latest edition in a series that has consistently set the industry benchmark for analysis of the satellite market. The 17,000 satellites expected to be launched in the next ten years represents a fourfold increase over the past decade, reflecting structural changes in the whole space ecosystem and a limited short-term impact of the pandemic.

The race is heating up to rapidly deploy commercial mega constellations for broadband communications and new constellations for real time observation of the Earth. Historical space powers invest in new satellite applications (e.g. Space Security Awareness) and a growing number of countries invest in their first operational satellite system, either for telecommunications, imagery intelligence, or space exploration.

The new edition of Euroconsult’s satellite market forecast assessed individually about 170 constellation projects, of which 110 are from commercial companies. While OneWeb, Starlink, Gwo Wang, Kuiper and Lightspeed will represent 58% of the 17,000 satellites to be launched, they will account for only 10% of the satellite manufacturing and launch revenues of the space industry. The report identifies two reasons combining to explain this difference: economies of scale in satellite manufacturing and a strong decrease in launch prices.

Despite a multiplication of commercial constellation projects, only a few place satellite manufacturing contracts, generally with established players. Excluding a few large deals for large constellations and new communication satellites in geostationary orbit (GEO), global competition remains limited for satellite manufacturing. Satellite demand from the governments fuels the competition between local suppliers with still limited opportunities for them to expand internationally (because of national preference in every country where a space industry is established).

“The satellite sector no longer revolves around the axis of New Space entrants challenging established legacy players. Instead, it has now shifted towards speed, and the ability to rapidly provide commercial services from satellite constellations, be it for broadband and/or narrowband communications (e.g. IOT) or for global and real time observation of the Earth. New Space is no longer the driving force in the industry. It's all about Fast Space now” said Maxime Puteaux, Principal Advisor at Euroconsult and Editor of the report.

Despite new business models from new commercial players in space, governments still represent three-quarters of the revenues of the space industry over the decade, i.e. $240 billion. Likewise, incumbent satellite manufacturers continue to dominate the market, with four of them capturing half of the market in the past decade for a value of $87 billion

“Satellites to be Built & Launched” is the go-to report for any player throughout the satellite value chain, ranging from manufacturers to launch brokers and space agencies, or for those looking for detailed insight into this exciting and fast-developing market. Appreciated by over 55 major players in 2020, the new report provides critical intelligence with as-yet unrivaled levels of precision.

The Premium Edition is available for the first time in Euroconsult’s history. It features line-by-line data on every satellite to be built and launched within the next 10 years, raising the bar once again for the granular and easy to use data access Euroconsult is known for.

The “Satellites to be Built & Launched” 2021 report is now available on Euroconsult’s digital platform in Standard and Premium versions, offering Euroconsult’s pioneering and unfettered data access and readability. A free extract can be downloaded.

The Euroconsult Group is the leading global strategy consulting and market intelligence firm specialized in the space sector and satellite enabled verticals. Privately owned and fully independent, we have over thirty years of experience providing first-class strategic consulting, developing comprehensive market intelligence programs, organizing executive-level annual summits and training programs for the satellite industry. We accompany private companies and government entities in strategic decision making, providing end-to-end consulting services, from project strategy definition to implementation, bringing data-led perspectives on the most critical issues. We help our clients understand their business environment and provide them with the tools they need to make informed decisions and develop their business. The Euroconsult Group is trusted by 600 clients in over 50 countries and is headquartered in France, with offices in the U.S., Canada, Japan, Singapore, and Australia. www.euroconsult-ec.com