For three days Amsterdam was the UAV capital of the world 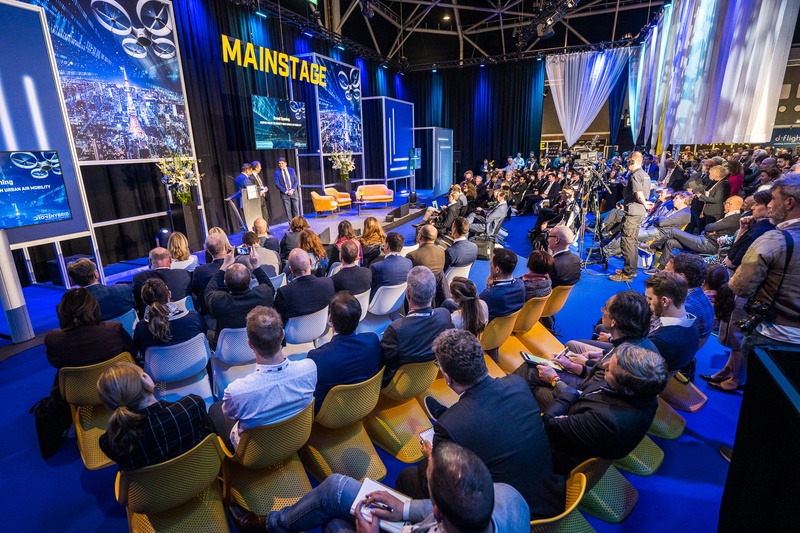 Nearly 3,500 visitors and 250 speakers, 80 nationalities and over 65 hours of panel discussions, showcases, workshops and presentations: the fourth edition of Amsterdam Drone Week and the High Level Conference on Drones, organized by the European Aviation Authority EASA and RAI Amsterdam, showed that the international drone sector has outgrown its infancy. Diana Cooper, Head of Policy & Regulations at Supernal, part of Hyundai Motor Group summed up the three days: “Advanced Air Mobility will augment, not replace current forms of transit, and will increase the efficiency and connectivity of our communities.”

During the previous edition - organised online due to the global pandemic - it appeared that legislation and regulations were struggling to keep up with the pace of growth of the international drone sector. Barely a year and a half later it appears that much of that legislation in Europe has meanwhile been implemented. And that gives the development of advanced air mobility (AAM) a new impulse.

It was obvious that many speakers and visitors of Amsterdam Drone Week were happy that they no longer had to greet each other via a screen. On and around the Mainstage, in the Xpert Theatre and in the matchmaking area, hands were once again shaken, agreements made and deals closed. "For many of us, it was the first time in two years that we saw each other in real life," said Patrick Ky, Executive Director of the European Union Aviation Safety Authority (EASA). "This created a very special atmosphere." Ky was also satisfied with the content of the more than 65 hours of panel discussions, showcases, workshops and presentations: "Despite the pandemic, this new segment of aviation has been extremely active in the last two years. We now have the European regulations in order, many billions are being invested in the sector and it is slowly but surely growing out of its infancy."

This was apparent from the coalition of the World Economic Forum (WEF) launched on the first day of the conference. That coalition of cities and regions will work together to make the possibility of advanced and urban aerial mobility a reality. “City leaders have a great opportunity to ensure that emerging advanced aerial mobility technologies are implemented in ways that work for cities and their communities rather than the other way around,” said David Hyde, Lead Aerospace at World Economic Forum. The same day, a Pan-European Urban Air Mobility Projects & Initiatives Community was launched, to foster sustainable development of the UAM ecosystem. The newly launched community aims to establish a Pan-European collaborative platform to facilitate knowledge sharing across UAM projects and initiatives in Europe.

During the fourth edition of Amsterdam Drone Week, significant steps were again taken to improve the connection between Air Traffic Management (ATM) and Unmanned Aircraft Systems Traffic Management (UTM). Simon Hocquard, Director General at CANSO and initiator of CATS Global Council announced a roadmap for future skies. “Last year, more than 50 organisations worldwide presented a common vision. Next June we'll launch the roadmap on how to get there. The speed with which we can achieve this together can only be possible with platforms like Amsterdam Drone Week.”

Whether the airspace will indeed contain more and more drones in the coming years depends to a large extent on public acceptance. But with the growth of the sector, the acceptance of the new form of mobility also seems to be increasing. Solène Le Bris, AAM Project Manager at Innovation Hub Groupe ADP said it aptly: “To accept it, people have to experience it first.” And that is exactly what the Paris region showed to the rest of the drone community. Marc Houalla, General Director, Aéroport de Paris, Charles de Gaulle: “During test flights at Pontoise airport, we could even hear each other in a whisper with a drone at a height of 25 to 50 metres. I therefore dispute that the noise nuisance from drones is so great.”

Nynke Lipsius, Director of the Amsterdam Drone Week, is looking forward to the next edition. Not only does the platform celebrate its fifth anniversary in 2023, Lipsius also expects that the sector again will have taken significant steps by then. “U-space will be implemented next year. That means that drones in the city will then become a reality. I am honoured that we can once again give the international drone community its own place.”

Amsterdam Drone Week is global platform for users, manufacturers, services and regulators, that unites the brightest and most creative minds of the UAM Industry. It is a co-created event which showcases the latest technology and helps unlock the potential of drones and discovery of new applications. For the duration of three days, this umbrella event connects the entire UAM value chain through a diversity of events around drone regulations, new technology and future solutions. Amsterdam Drone Week 2023 will take place in RAI Amsterdam from 21 to 23 March 2023.