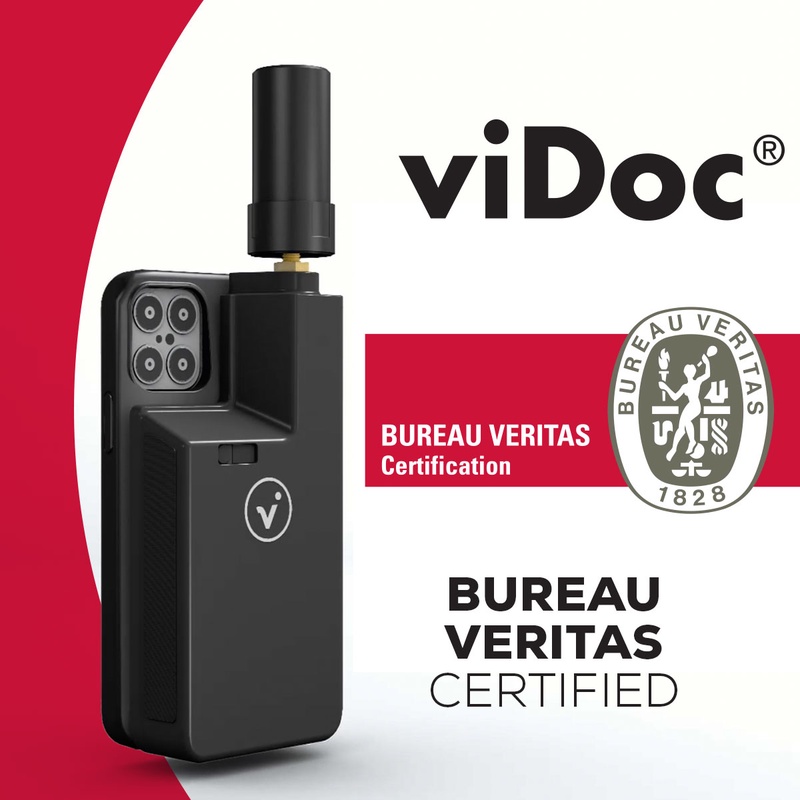 Lausanne, Switzerland, [June 28, 2022]: Pix4D, the market leader in photogrammetry solutions, is pleased to announce the certification of the viDoc by Bureau Veritas. This official recognition confirms that the viDoc is accurate enough to be used in industry. The Bureau Veritas found the viDoc to have a margin of error of less than 5cm, which is half the required accuracy for Class A measurements. They tested it for volume calculations as well as measurements for digitizing as-builts in a trench.

The Bureau Veritas is a company that specializes in testing, inspecting, and certification (TIC) across multiple industries, which it has been doing for 190 years and is highly regarded worldwide. The viDoc was submitted to them to be inspected and certified. The viDoc is a handheld case with an RTK antenna that connects to mobile devices. It was originally designed by German company viGram and is distributed by Pix4D worldwide. When paired with the app PIX4Dcatch, viDoc enables users to gather geotagged LiDAR and photogrammetry data for use in creating 3D models or single point measurements. These datasets can be processed in Pix4D software either online (via PIX4Dcloud) or on desktops (PIX4Dmapper, PIX4Dmatic, PIX4Dsurvey). The outputs are 3D site models that can be measured, analyzed, and shared.

Class A measurements require at least 10 centimeters accuracy, which means the viDoc is well within expected limits. For trench measurements, the viDoc was confirmed by Bureau Veritas as accurate to within 5 centimeters and had a margin of error for volume calculations of less than 5%. Their certification said that the results were equivalent or superior to other surveying methods, namely with GPS or total stations. This means that a handheld, portable RTK rover is creating results with equal or better accuracy than cumbersome or older methods.

“We are proud to have received this certification for the viDoc, which affirms our belief in the viDoc being a game-changing tool. Its use in construction, public works, and surveying will continue to grow and see benefits due to a global push to accurately geolocate all utilities. This is the sort of project where we expect there to be high interest in the viDoc,” explains Ryan Sweeney, Product Manager for viDoc.

The viDoc RTK rover’s certification by an influential body like the Bureau Veritas is a significant achievement for Pix4D and viGram, who passionately believe this device has great potential in multiple industries, including construction and public works. The device is already available for sale worldwide, with licensed Pix4D resellers often offering Demo Days for people to try the technology for themselves. With the certification from Bureau Veritas, the viDoc has been confirmed to be an accurate tool for terrestrial site scans to create 3D models and make single point measurements.

Pix4D (pix4d.com) develops cutting-edge software and hardware that converts images taken by hand, drone, or plane into accurate and georeferenced survey-grade 2D mosaics, 3D models, and point clouds. Founded in 2011, Pix4D is rapidly expanding from its headquarters in Lausanne, Switzerland, to offices in Berlin, Madrid, Bucharest, Denver, Shanghai, and Tokyo.

Pix4D is best known for PIX4Dmapper, the industry-leading photogrammetry software for drone mapping, and other software solutions like PIX4Dfields for agriculture, PIX4Dreact for emergency response, PIX4Dcloud for online drone mapping, progress tracking, and site documentation, PIX4Dinspect for automated industrial inspection and asset management, PIX4Dmatic for large scale or terrestrial mapping and PIX4Dsurvey for efficient terrain modeling and vectorization.

Pix4D is the exclusive distributor of the viDoc RTK Rover worldwide.