Are We Listening? A View into Americans Compliance with COVID-19 Movement Restrictions

May 1, 2020 – For most Americans, the COVID-19 pandemic represents the single most disruptive event in their lives. Routines have been profoundly altered in a relatively short period of time, forcing all of us to adapt in ways that seemed unthinkable when we celebrated the beginning of a new decade mere months ago.

The most profound change we have embraced is the restriction of movement in our daily lives. Business closures, stay-home advisories and social-distancing orders have all impacted how often we go out. And we know that these efforts are critical to the public health effort to contain transmission of the virus and flatten the curve.

But has everyone been complying with the stay-home requests? Environics Analytics examined the movement patterns of Americans from early February to late April based on an anonymized mobile movement database. Not surprisingly, we see different rates of compliance across the country.

In the first weekend in February, when COVID-19 restrictions were not yet in place, the country was at a normal activity level. The county-level map below shows the percentage of people who went out that weekend. People in rural areas were most likely to go out, generally travelling greater distances than urbanites to pick up groceries, go to their jobs or see family and friends. People in suburban and urban counties normally do not travel as far or as often outside their homes.

By the third weekend in April, as seen in the second map, the national picture looked very different. With the COVID-19 crisis at its peak and firmly planted in the American psyche, the percentage of people going out along major coastal metro areas drops significantly. Small town and rural America also reduce their going out rates in response to the crisis. 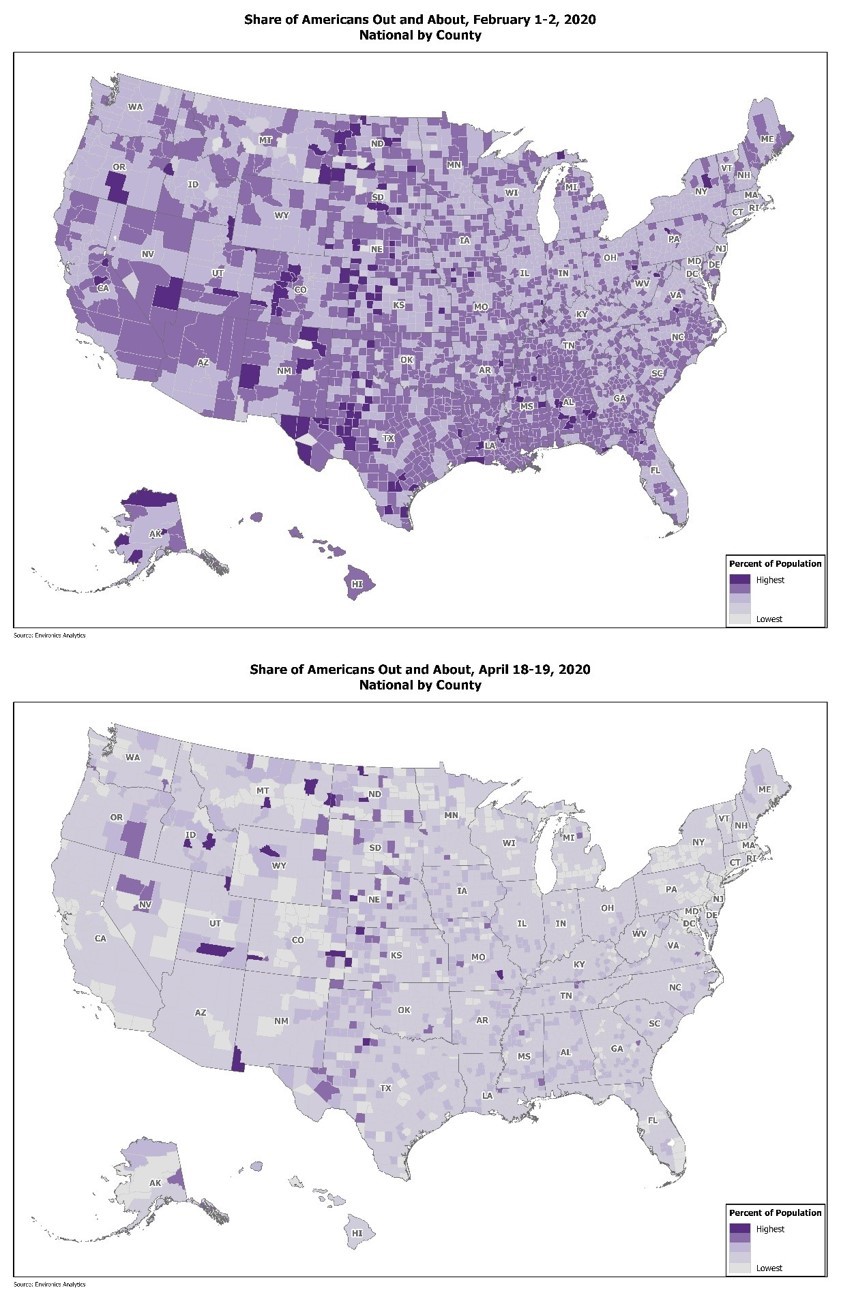 Using mobile movement data alone does not capture the full picture of people across America or more importantly, the factors influencing their behavior. They have different demographic profiles, socio-economic circumstances, behavior pattens, attitudes and values. We used privacy-compliant data at small geography levels to draw insights about the population that can be used to inform public outreach, program development and communications.

What did our analysis find about different population groups as it relates to going out rates during the COVID-19 pandemic? Here is a snapshot based on the Claritas PRIZM® Premier segmentation system, a lifestyle segmentation system that classifies Americans into 68 segments linked to thousands of behavioral and psychographic dimensions. We compared segments that share some common characteristics but differ in their stay at home compliance with some of the following insights:

We looked at two PRIZM Premier segments that are both middle-aged and live in small American cities. 22 Middleburg Managers is an upscale segment of business professionals while 64 Family Thrifts is a low-income segment with people employed in the service industry. A key difference is that many 22 Middleburg Managers residents can continue working from home or have the means to order groceries and other goods for delivery to their homes. This may account for the fact that their going out rate is 16% below the national average. By contrast, 64 Family Thrifts residents are on the front line as cashiers or in the food service industry and must go out to work or venture out for food and supplies. Their going out rate is 22% above the national average. Despite their differences in movement, both segments share a common value around “Active Government”, a tendency to believe that government performs socially beneficial functions. Local governments can leverage this attribute in compliance communications around social distancing guidelines and other preventative measures. 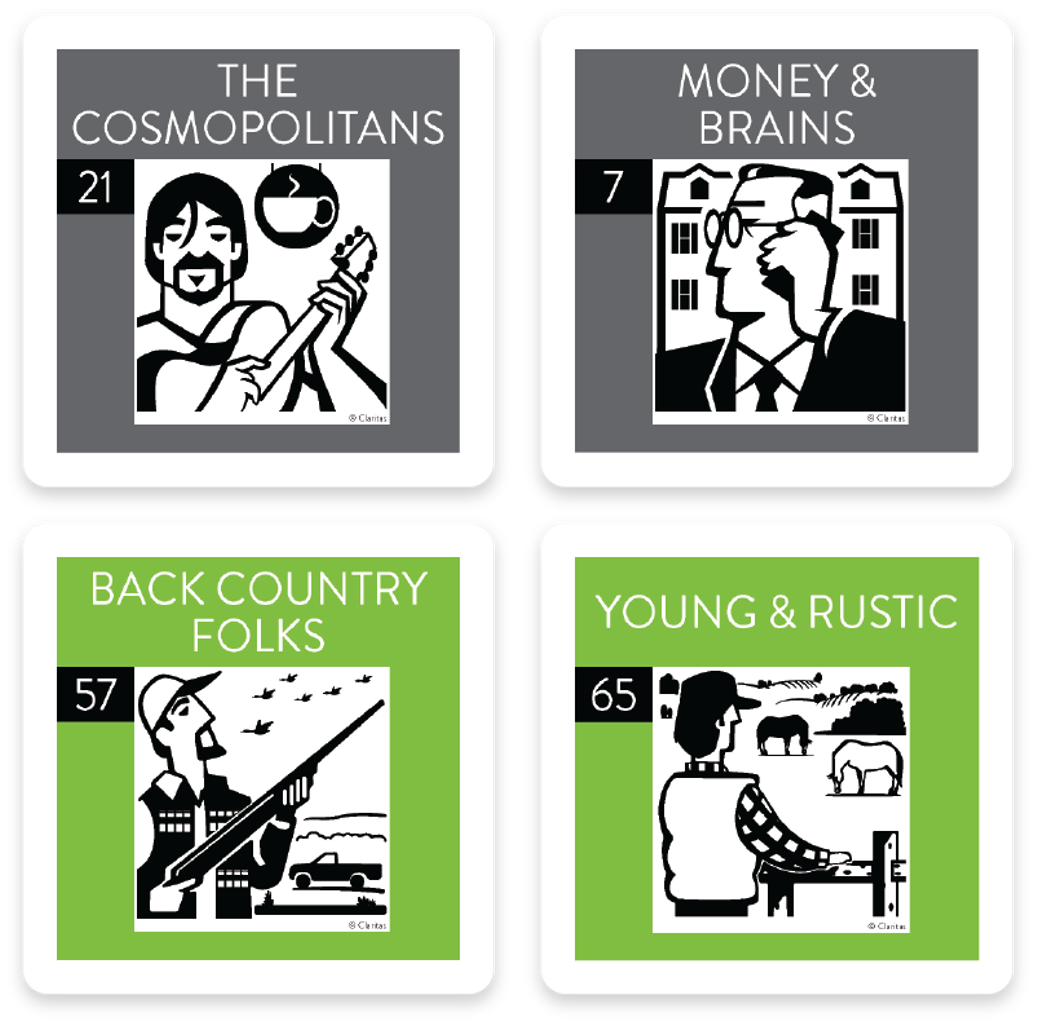 In the early days of the crisis we saw reports of spring breakers on the beaches of Florida violating social distancing guidelines. Young people became a focal point for pandemic-related containment communications. But our research indicates that urbanity and income play a larger role in going out behavior than age.

In urban areas we looked at two segments, the older 07 Money and Brains and the younger 21 The Cosmopolitans. Both are upper-class segments, with incomes above $90,000 and highly educated. The segments show 25% and 21% rates respectively that are lower than the national average for going out. They can stay in because as executives and programmers they can work from home. Both segments watch CNBC and CNN at above the national average so public safety messages through these channels can be a good way to reinforce positive behavior.

In rural areas we looked at the older segment 57 Back Country Folks and the younger segment 65 Young & Rustic. Both are low-income and predominantly high school educated, and respectively showed levels of going out 25% and 27% higher than the national average. This may be attributable to their lower incomes and the fact that they have no choice but to go out for their work and to get essentials. Segment 57 Back Country Folks higher movement levels is also a concern given that they index highly for high blood pressure, one of the co-morbidities most likely to cause complications for COVID-19 patients. A more direct approach of delivering supplies and facemasks to homes may be needed to help lower-income segments play a part in preventing the spread of COVID-19. 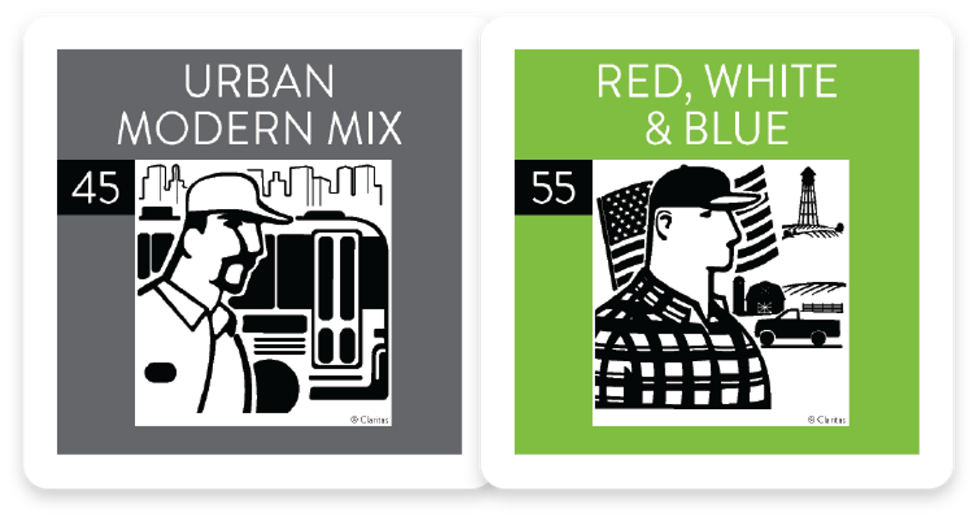 We compared two low income segments to understand the differences in going out behavior between city segments and rural segments. Both segments are middle-aged, mostly without kids living at home and with lower than average incomes. One big difference between the two segments is that 45 Urban Modern Mix has a going out rate of 2% above the national average, while 55 Red, White & Blues has a going out rate 22% above the national average. Both segments find themselves on the front line as nursing aides, plant operators, protective services and cashiers, but the residents of 45 Urban Modern Mix live in denser neighborhoods with stores near by and do not travel as far as the residents of 55 Red, White and Blue to get essentials. On the other hand, any going out behavior by 45 Urban Modern Mix is more likely to bring them into contact with more people because of their higher density neighborhoods.

How do you deliver the right message through the right channels to help mitigate the spread of COVID-19 among these segments?

We found that 45 Urban Modern Mix spend 5 or more hours per day on social networking sites at rates 48% higher than the national average. They use those sites for dating and job searches so messages encouraging people to follow social distancing guidelines through these websites might be a good way to reach them. Since they rank high on a variety of psychographics indicating concern for others and the world like “Ecological Concern”, “Global Consciousness” and “Social Responsibility”, framing messages to help others and the world is a good way to speak to this segment.

By contrast 55 Red, White and Blue are much less likely to use social media, turning to radio and television instead for entertainment. They listen to classic country stations at four times the national average. On television they are fans of the INSP network where they watch western classics like Gunsmoke and Walker Texas Ranger. Country music on CMT network is a close second favorite. Unlike 45 Urban Modern Mix, the residents of 55 Red, White and Blue index quite low on the psychographic “Global Consciousness”. They are more likely to believe in “Parochialism”, meaning they are more tied to local and national concerns, and in “Obedience to Authority”. A strong, clear message from government officials is better than ambiguous rules or guidelines.

Governments have enacted a variety of orders, legislation, guidelines and enforcement to get large numbers of people to stay home. But Americans are a diverse population in a large country. We behave, think, consume and generally act differently based on thousands of attributes, including where we live. Further improving compliance will require more nuanced strategies targeted to specific populations who cannot, or will not, stay home.

Methodology Statement: Environics Analytics has a privacy- compliant database called MobileScapes developed from aggregated mobile phone movement data from multiple sources. Using these data, we identified devices that were out of their homes during the daytime for weekends from early February to late-April. The measure of “going out” was devices that were observed more than 300 feet, at least three times for ten minutes each in a day, from their inferred home ZIP+4.