Known for its emerald waters, rugged coastline, blush-hued sand and medieval castles, Brittany’s beauty brings crowds of tourists to its shores every year. That same beauty also attracts hundreds of thousands of new residents. With such population growth saturating its infrastructure, plus rising housing demands, the region’s rural farmland and natural environments (65 percent of the region) are threatened.

French planners and biodiversity specialists have been pressured to balance this urban sprawl with environmental protection policies, but existing vegetation maps of the region have made that difficult. The information has been insufficient in detail or coverage and too variable from one territory to another, preventing any cohesive regional analysis.

As specialists in studying, inventorying and preserving vegetation, the National Botanical Conservatory of Brest (CBN) offered to provide a common vegetation repository. Brittany’s CBN has had a long history of focusing on the small details of the region’s landscapes, recording meticulous notes and maps of plant varietals and habitats at scales of 1:5,000.

“Vegetation maps are an essential tool for stakeholders in biodiversity conservation and land use planning, but traditionally, these maps have been produced for a specific need like small-area mapping for the European Commission’s Natura 2000 program or for particular local projects,” says Vanessa Sellin, a project manager with CBN. “Mapping methods have also been predominantly manual –– field data is recorded on paper and manually input into a GIS. The time-consuming approach, together with such a localized mapping focus, has made it difficult for regional development managers to acquire an accurate picture of the vegetation landscape as a whole.” 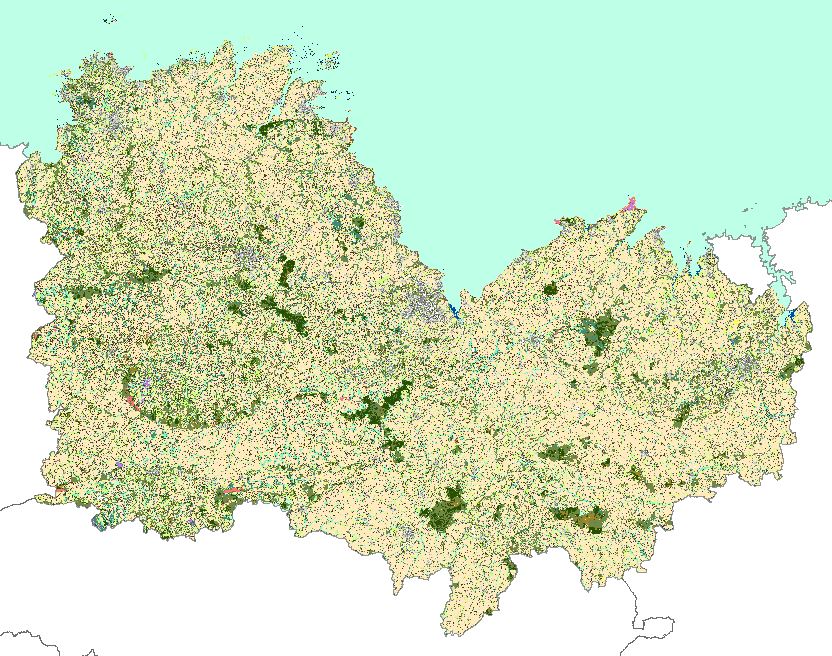 Sellin, a biologist and geology scientist with a Master’s degree in GIS, joined the CBN in 2011 to specifically fill in that mapping gap.

With the goal of developing a more efficient vegetation mapping methodology at smaller scales, Sellin established a viable semi-automatic mapping method combining orthophotos, GIS data and object-based image analysis software (OBIA). The new system has not only proven that large swaths of vegetation can be quickly and accurately classified and mapped, it enabled the CBN to produce Brittany’s first-ever regional vegetation map––a goldmine of classified flora that is giving stakeholders a holistic view of Brittany’s biodiversity –– and the tools with which to protect, develop and manage it.

With local research, development and funding support, Sellin launched in 2011 a series of studies to develop a semi-automated eCognition approach to vegetation mapping at a 1:25,000 scale. She began by researching satellite imagery and orthophotography options and testing image processing and analysis software solutions, including traditional pixel-based methodologies and Trimble® eCognition® OBIA technology. Her trials showed that eCognition was providing the best vegetation mapping results.

“What became clear with OBIA is that we could integrate our rich GIS data layers and achieve more comprehensive and precise results in our classifications,” says Sellin. “OBIA not only considers an object’s color, it also analyzes its shape, its texture, and its relationship to its neighbors. Taking in more inputs enables it to more accurately determine what an object is.”

In 2016, CBN put the technique through its most significant trial: mapping the main vegetation of the Armorique Regional Natural Park (PNRA), a 125,000-hectare protected territory in Finistère, a department in Brittany. The Park’s flora is considered representative of the vegetation of the Finistère and Brittany in general, making it the perfect test case for the eCognition-based mapping tool.

Sellin acquired 1,763 color, near-infrared (NIR) orthoimages from IGN, France’s national mapping agency, and then merged the 50-cm orthoimages into a mosaic of 37 50-sq-km tiles. She created two texture-specific images from each tile to enhance the determination of similar looking vegetation varietals.

She also selected about 10 GIS data layers including bogs, sand dunes and forest types. Integrating this vector information enables eCognition to better discriminate among vegetation types with homogenous spectral signatures such as wet and dry heathlands.

The raster data and supplemental GIS data were then integrated into eCognition for analysis.

Predominantly using the texture images, brightness and a normalized difference vegetation index (NDVI), eCognition moved from one orthomosaic tile to the next and first distinguished the easiest class to characterize: non-vegetated areas such as roads, buildings, and rivers and artificial areas like gardens. Based on tiered workflows, the software then used a series of segmentation and classification algorithms to separate objects into different classes of vegetation, non-vegetation and artificial vegetation. After sorting these, eCognition began the process of identifying specific vegetation types––a hierarchical classification approach that optimizes processing efficiency and rule-set transferability.

Using a multi-resolution segmentation algorithm defined by NIR, red and green, and object scale, shape, texture and compactness thresholds, the rule set first segmented the data stack into meaningful objects that gave more weight to NIR reflectance and compactness of the objects while also considering the height of the vegetation and spatial relationships. Subsequently, vegetation class objects were merged and re-segmented, and then following user-defined spectral rules, the software identified and combined new objects with similar spectral signatures. Adding in other texture-based indices and defined parameters, eCognition then identified specific vegetation classes, distinguishing the easiest class of vegetation (forest, dunes) to the most difficult (shrubs, heathland).

In total, eCognition delineated 27 classes, which were then exported into ArcGIS to finalize the 1:25,000 PNRA map.

“One of the powers of eCognition is its ability to take in any spatial-based data and classify whatever you tell it to,” says Sellin. “It’s smarter and more efficient and definitely more accurate than pixel-based image processing software. And it proved that it’s capable of producing large-area coverage vegetation maps at a large scale with high precision.”

Indeed, with the success of the PNRA, CBN received regional buy-in to scale the mapping system for the whole of Brittany.

A treasure is preserved

With the financial and administrative support of ten regional partners, the CBN hired four more staff members to join Sellin and launched the two-year, 600,000 euro Brittany vegetation map project in 2018.

Similar to the PNRA project, the landscapes of each of Brittany’s four departments –– Finistère, Ille-et-Vilaine, Côtes-d'Armor and Morbihan –– would be categorized into 27 major classes and mapped at a 1:25,000 scale.

In March 2018, the team began with Finistère, set in the extreme west of Brittany.

Following the same previous approach, they acquired 8,071 color NIR orthoimages from IGN and combined them into 178, 50-sq-km image tiles for eCognition to analyze and classify. (Since the PNRA and city of Brest were already mapped, they excluded those areas). Using customized rule sets, the software sorted the objects into 27 different major classes––16 vegetation, six artificial vegetation and five non-vegetation.

They exported the classification into ArcGIS and again validated the results with existing data and ground truthing. They finalized the map in October and published it online in December 2018.

“With this map, people in Finistère can now easily see the dominant crops and low- density hedgerows in the north, the moors and peat bog in the center, and dunes, heathland and saltmarsh on the coast,” says Sellin. “It’s a holistic view planners and managers have never had before and they have been rushing to see and use the data.”

The map for Ille-et-Vilaine was released online in September 2019. Côtes-d’Armor’s map was published in January 2020 and the map for Morbihan is scheduled to be available in June 2020. All the maps are freely available on the CBN’s website, and once all maps are complete, the team will combine them to create one seamless vegetation map of the whole 680,656-ha region.

“There was no way we could’ve produced this regional map this quickly without eCognition,” says Sellin. “Providing an accurate overview of a territory enables us to readily see the distribution of vegetation and identify specific areas that require more analysis. The OBIA approach is a great complement to our small-scale traditional mapping methods. It’ll now be our standard tool for classifying and mapping major vegetation types at larger scales.

In addition to the environmental value of the new map, the classified landscape will be an instrumental tool to help authorities manage urban sprawl. Local law dictates that any new proposed construction must first conduct a biodiversity study to assess its potential impact on green and blue (wetland) corridors. This new map will enable authorities to accurately determine the new building’s consequences on those protected corridors, as well as agricultural land and suburban natural environments––strong intelligence that will serve them well as Brittany’s Emerald Coast is forecasted to attract hordes of new residents well into 2030.

Unlock the Power of Location in your IoT
Why Extend Your GIS to the Cloud: A Customer Success Story
From Farm to Table: Mapping Our Meals
Raising the Bar for GIS Applications in Government Settings
Putting a Stop to Traffic Issues
How to Create a Distance Matrix in QGIS - A Step-by-Step Guide
Make Beautiful and Accurate Maps within Microsoft Power BI with Esri’s ArcGIS for Power BI
The Game's Afoot: Exploring the Geography of Sports
GIS for Projects – even during COVID
Podcast: Community Mapping and Social Justice - A Conversation with Black Girls MAPP
How much do you really know about the U.S. Census?
Modeling Disease & Behavior Using GIS
Why Cartography Still Matters