The Geography of Movement

Human and natural history have always been defined by movement. It is one of National Geographic’s five main themes of geography. Movement defines and shapes our world. We Homo sapiens have moved ourselves, by choice or circumstance, for millions of years. Before us, and in the present, countless other species have moved, and are still moving, across the world. The continents themselves have moved over time scales we can barely comprehend.

Across this verdant orb that we call home, plants and animals large and small have spread, from pole to pole, from jungles to deserts, and across vast oceans. In this article, we’ll explore the geography of movement from prehistoric times to the modern day.

Not all who wander are lost.—J.R.R. Tolkien

There are many theories about how our species spread across the globe. In my anthropology and archaeology studies, I was exposed to many of these. The most widely accepted theory, based on archaeological evidence that dates anatomically modern humans to three million years ago, indicates that we originated in East Africa and, over millennia, colonized the globe. National Geographic offers an interactive map of the 60,000-year journey.

On the larger time scale, it didn’t take that long. If a family or clan only covered an average of a mile a day, that was 365 miles per year times 1000 years… You can do the math. As a very adaptable species, Homo sapiens colonized the globe in a remarkably short time span, geologically speaking. Another fascinating (though bandwidth-heavy) interactive map, built by the California Academy of Sciences, shows not only the migration of humans but also the global climate conditions during each stage.

Humans aren’t the only ones moving, but we are certainly the most adaptable to changing conditions. Other animal species, both terrestrial and aquatic, have very specific habitats. Like humans, they seek the most ideal habitat for survival, but their migration patterns are driven by instinct, so they follow the same routes for countless generations.

Salmon, of course, are among the most iconic (and delicious) migratory species, with life cycles dependent on the connectivity of freshwater and salt water. As I explain in my Environmental Law and Policy course, salmon management in the U.S. is complicated: When salmon are in the ocean, management falls under the National Oceanic and Atmospheric Administration in the Department of Commerce. When they are in rivers, the U.S. Fish and Wildlife Service develops plans under the Department of the Interior.

NOAA has a comprehensive, though complicated, suite of maps and data for salmon and other species. The maps themselves are easily digestible and show fascinating patterns, but they are very granular, region by region. A more digestible and easier deployed exercise about Atlantic Salmon for the classroom is on ArcGIS.

Cultural resources and natural resources are inseparable. For thousands of years, people have followed animals, and animals have followed people. One of the most iconic animals in North America is the American Bison, which were hunted to near extinction during waves of Euro-American colonization. From Canada to Mexico, and especially in the Great Plains area of the U.S., efforts to restore their population, for both cultural and natural benefits, have gained momentum in recent decades, as illustrated in this story map.

The Infographics Lab at the University of Oregon is a world leader in producing both atlases and online maps. One recent project was “Wild Migrations: Atlas of Wyoming’s Ungulates,” which was developed in concert with the Yellowstone to Yukon conservation initiative. This initiative includes a number of projects involving geospatial technologies, including ground-level training in animal tracking and large scale spatial analysis. The Yellowstone to Yukon corridor is vast, spanning thousands of miles across two countries, several states and multiple provinces. Many jurisdictions, agencies and stakeholders are involved. As with any effort of this scope, geospatial technologies play a critical role.

When my wife was recovering from a serious injury, she had a lot of time to look out the window and watch the Simpsons. (That’s the title reference.) During this time in the early aughts, we were living in Seattle, a hub of global transportation. We had a view of Elliott Bay, and there was constant marine traffic—cruise ships, commuter ferries, naval and Coast Guard vessels, and of course, container ships—all coming and going, hauling tons of cargo and thousands of people every day.

Shortly after the September 11 attacks, there was a strike among dockworkers in Seattle. The details escape me, but I remember waking up to our view and seeing dozens of container ships sitting idly, and every day, there were more. It made me realize how interconnected the world is, and I wondered… what is in those containers? T-shirts, toys, televisions? Wheat, oil, coffee?

As I watched those vessels, none ever ran into each other, as far I could tell. Since GPS was developed for marine applications, nearly all registered marine vessels have GNSS systems on board. In the early days, they didn’t have to be that accurate. As long as an oil tanker could find its way to a port, or a submarine-launched nuclear missile could reach Russia, the system was good enough. Of course, the commercial applications of GNSS became obvious, and it is now a nearly ubiquitous technology.

The Living Atlas on ArcGIS.com has a fascinating (and possibly addictive) interactive map of marine traffic from 2017 to the present, showing the movement patterns of cargo, fishing, military, passenger, pleasure, tanker, and tow vessels. It also offers downloadable data from NOAA, giving researchers and educators scalable datasets for marine traffic.

Sadly, cruise ships, tour boats and ferries aren’t the only vessels that have carried people across the water. One of the most shameful and horrific activities in human history was the trading of humans from Africa to the Americas. Its story is long and, like Alex Haley’s book “Roots,” can take a long time to digest, because of its spatial complexity and a temporal scope of over 300 years. But it is an important story, and, as I always say, a map can tell a thousand stories. Slate.com made an animated map of this period, showing, in geographic detail, the scope of this centuries-long tragedy.

Also available is a database built

by the nonprofit Slave Voyages, which contains meticulously researched data

for thousands of voyages. The data were used in the above maps, as well as in a

Similarly, hundreds of thousands of people have been displaced by war and famine just in this century. A powerful (and heart-wrenching) interactive map shows the spatial patterns of refugee movement from 2000 to 2016. It doesn’t include the current Ukraine crisis, but there are many maps that do, including one by the BBC, one of the most reliable news sources in the world. The Syrian refugee crisis is equally tragic, as illustrated in a map by vox.com, which also has a gallery of other data-centric maps. 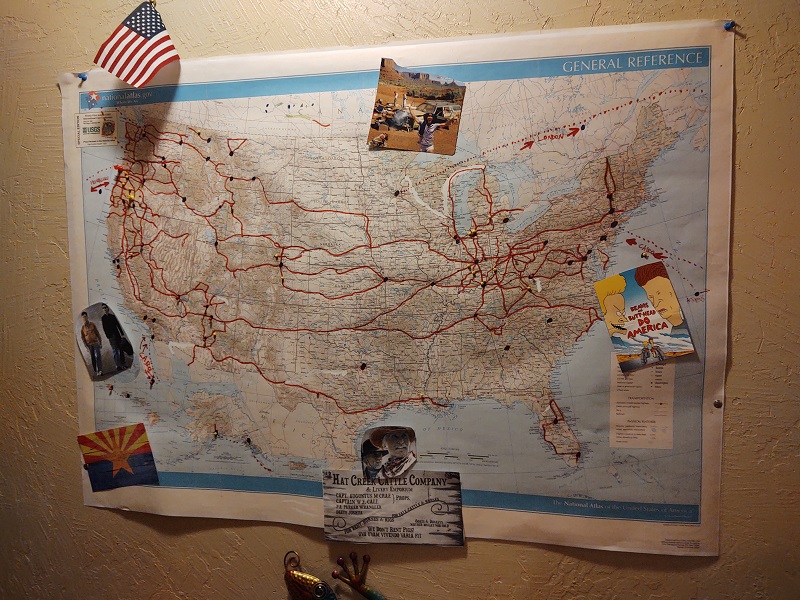 On a Happier Note…

Many of us, and our students and colleagues, start our day with a hot cup of coffee, brought to us by the same container ships that were stranded in Elliott Bay in 2001. (I’m sure the folks at Starbucks were panicking!)

Since time immemorial people have been trading with each other, and in my archaeology career, I have discovered that the temporal and spatial extent of trade routes are astounding. The volume of trade in our modern era is even more amazing. We use ships to transport commodities across vast oceans, trains and trucks to transport them across continents, and airplanes to move people and extremely valuable cargo, like diamonds.

We Will Never Stop Moving!

Like all organisms, humans are instinctually driven to move, although individuals may have different preferences. One of my uncles still lives in the home in which he grew up. Our friend Dawn, on the other hand, has lived in New York, France and Germany, and last year, drove herself from Florida to Alaska, where she now lives. But as a species, we will always be seeking new frontiers.

Likely, few of us will be alive when we move beyond Earth, but I am sure that will happen. When Marco Polo returned from his decades-long expedition, nobody believed that rock could burn (coal). In the early 1960s, few people believed that humans would set foot upon the moon. Yet these fantasies became reality. Even plants are able to move through pollination and seed dispersal. Who knows where or how the next migration will take place? Our spacecraft have gone beyond the solar system, and our submersibles are just beginning to explore the depths of the ocean. In reality, there is no last frontier… just new ones.