Putting a Stop to Traffic Issues

Colorado is often considered a rural state but when it comes to major cities, Denver is one of the fastest growing in the U.S. With this growth comes new challenges, such as managing the increase in traffic. As part of its efforts to address this challenge, the city is working to update its public transportation system – an effort that included inventorying all 3,000 bus stops. To do this, they turned to All Traffic Data Services, Inc. and Felsburg Holt & Ullevig, a data collection company and a multidisciplinary consulting firm with a focus on GIS services, who completed the task using the Trimble MX7 and ESRI’s ArcGIS platform.

Not so long ago, ATD, a Denver-based company with nearly 20 years of experience working with public and private clients of all sizes, would have done this type of inventory manually. “This meant driving to each location and taking a photo of the guardrail, sign or whatever was being counted,” said Dawn Boivin, chief operating officer at ATD. “But with 3,000 bus stops spread across more than 1,750 miles to be inventoried, this project was way too big to do it the ‘old school’ way.”

Mobile mapping provided an ideal combination of speed, accuracy and the ability to capture comprehensive information in a single operation. In consultation with Frontier Precision, ATD selected the vehicle-mounted MX7 mobile imaging system for the project. 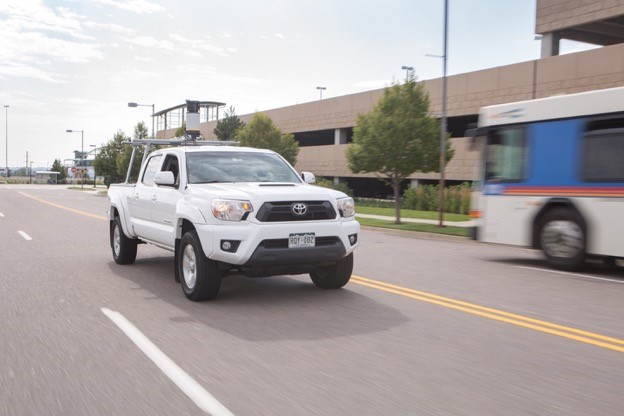 While moving at up to highway speeds, the MX7 consistently captures 360-degree, georeferenced images. For this project, ATD used the technology to collect imagery along the desired corridors and visually complete the asset inventory. “After receiving the corridor routes via ArcGIS, we simply installed the mobile imaging solution on the vehicle’s roof and proceeded to the particular corridor set up for that day,” Boivin explained.

The georeferenced images were then uploaded to the Mapillary platform. “Once in Mapillary, we used ArcGIS to capture an image of each bus stop,” Boivin said. “We then input the assets into a spreadsheet, which was later integrated into the final geodatabase provided to the client.” 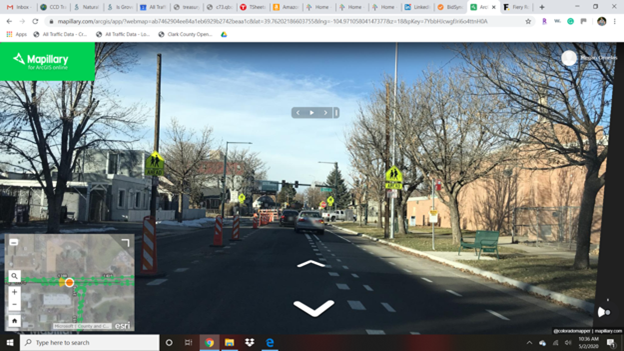 “While the imagery captured by the MX7 was stored separately from the final bus stop inventory geodatabase, it was beneficial to enable geodatabase file attachments and extract image snapshots from the MX7 imagery and physically embed them into the final geodatabase,” said Megan Ornelas, GIS manager at FHU.

Denver is using this data to create a consistent base inventory of all bus stops, identify deficiencies in the existing inventory and prioritize improvement projects.

The Denver Moves project was ATD’s first experience using the Trimble MX7. However, due to its accuracy, speed and safety, it won’t be its last. “Having precise location information made locating the stops much easier,” Boivin said. “It also proved valuable when it came time to add the images to the city’s GIS and asset management systems.”

Using mobile mapping also allowed for a significant time savings. “If we had to physically go to each stop and take a picture, the project would have taken up to 400 hours,” Boivin said. “With the MX7, we collected the field data in just 100 hours.” 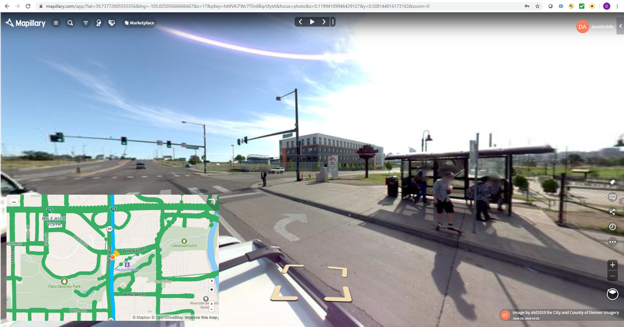 When viewed in Mapillary georeferenced MX7 image of a bus stop is combined with an overview map to provide additional context.

Boivin also noted how the mapping system helps improve safety. Instead of using an off-speed vehicle that creates a traffic hazard, the MX7 allowed ATD to collect data while driving at the speed of traffic – a feature that made the process safer for everyone.

Even though ATD has only used mobile mapping for asset management, they see the potential for using it with a range of visual-based needs, from evaluating existing conditions along a corridor to measuring the progression of a construction project or monitoring signs and signals.

“Because the amount of information available from the MX7 is so diverse, it gives you the ability to capture infinite data,” Boivin said. “Using mobile mapping is so straightforward that, after a couple times setting it up, using it becomes second nature.”