Forest management in the Canadian province of Quebec is serious business. With forest landscapes that cover an area twice the size of Sweden, Quebec’s forest industry is valued at around $10 billion Canadian dollars (U.S. $7.8 billion), the second largest amount of any Canadian province. It employs about 65,000 people.

Although forest managers have used geospatial tools such as aerial photography, optical satellite imagery and GIS software to assess their properties, the process of classifying forest land and delineating forest stands—i.e., a contiguous group of trees that are sufficiently homogeneous in species, density and size—has typically been a laborious combination of photogrammetry and drawing features by hand.

As an applied research center, Quebec City’s CERFO has been a key supporter of the forestry business. Working with partners and forest managers, CERFO develops tools to help owners better manage, assess and inventory their present-day holdings in order to develop long-term operational strategies.

In his work at CERFO, Varin has spent considerable focus on using satellite imagery and object-oriented image analysis technology to build an automated forest classification and mapping solution that would target mapping trees at the individual level.

His recent research has centered on using very high-resolution satellite imagery, Lidar data, and Trimble’s eCognition OBIA software to study the ability to automatically identify individual broadleaf and conifer trees in dense, complex forests—trees that are especially challenging to classify.

“Identifying and delineating broadleaf trees are difficult because their branches are interlaced and the individual tree crowns are not always pure,” Varin said. “It is particularly difficult to classify them in stands that contain trees of the same height and age. And in broadleaf-dominant forests, conifer trees like balsam fir are challenging because they are generally small and they’ll be in the broadleaf’s shadow. However, the analytical intelligence of OBIA software makes classifying and mapping these tree types possible.”

Based on the promising results, Varin may be cultivating a new path for efficient, targeted tree management.

Varin and colleagues not only wanted to test the automated classification method on broadleaf and conifer species, they wanted to test it in a complex forest. They chose three areas of interest totaling 26 square kilometers in the Kenauk Nature preserve, one of the largest private nature reserves in North America. Located in the southwest of Quebec, the property encompasses 26,000 hectares (65,000 acres) of heterogenous forest.

For the data analysis and classification, they acquired two 30-cm WorldView-3 satellite images, orthorectified them with a 5-m Lidar DEM and then mosaicked them. The Lidar data was also used to create a canopy height model which they overlaid on the mosaic.

Based on existing aerial imagery, researchers first identified relevant trees for field data collection. Using Trimble Pro 6H GPS receivers, teams navigated to the pre-selected trees in each AOI to capture their position, height, diameter and species type. In total, they surveyed 515 trees, which they further processed into 338 reference samples for both training eCognition and validating the results.

With the data sources prepared, Varin and his team were ready to test the eCognition classification workflow. Using advanced artificial intelligence and machine-learning algorithms, the software focused only on trees higher than 17 meters and used the WorldView mosaic and the CHM to first segment the whole AOI into individual tree crowns. From there it considered pre-defined object thresholds and textural indices to identify and delineate broadleaf trees from conifers. Then it targeted the individual species within those two groups. In about two hours, eCognition classified 11 tree types including red oak, sugar maple, balsam fir, eastern hemlock and white spruce. 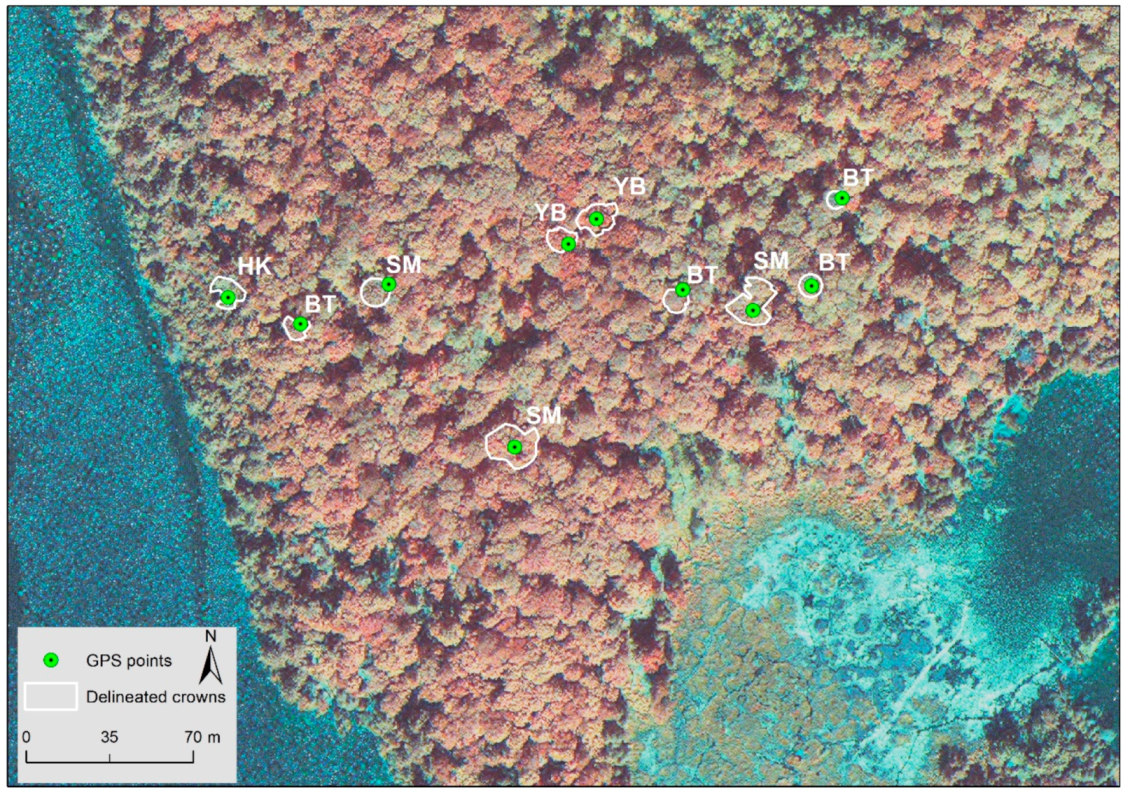 Based on GPS positions, a team used photo interpretation to manually delineate tree crowns to fit the crown to the correct tree on the WorldView-3 images. The background image displays WorldView-3 in false colors (infrared, green and blue).

“The delineation process was surprisingly quick and precise,” Varin said. “The overall accuracy for conifers was 94 percent. That is very good considering the complex heterogeneity of the AOI.” 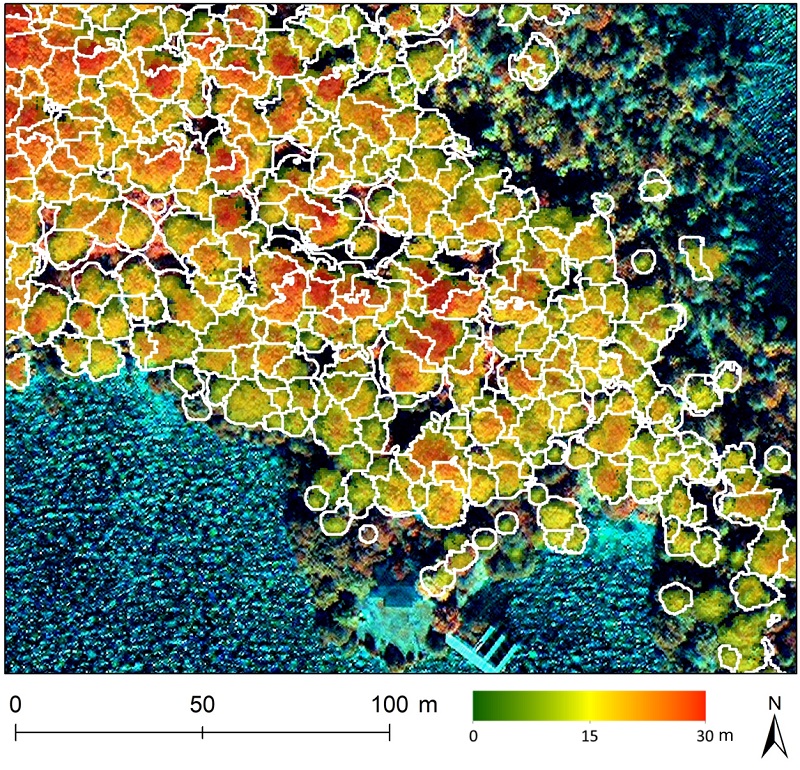 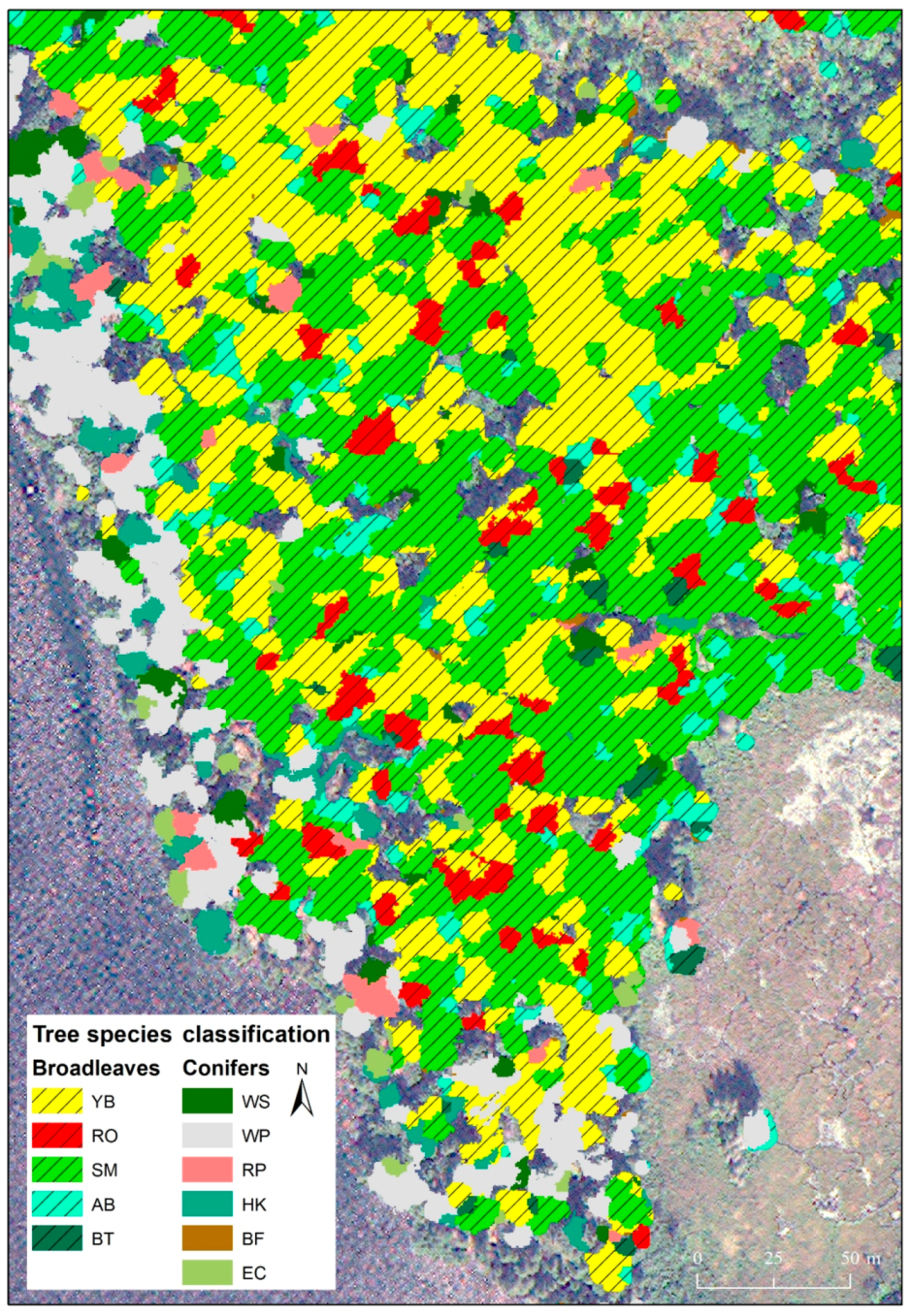 The CERFO team shared the results with forest managers, many of whom can already see the potential value in having a tree-specific data layer in their GIS for developing targeted harvesting or planning. They also recognize the value of this OBIA-based approach as a viable enhancement to the traditional classifying and mapping methods using photogrammetry.

Supported by that positive feedback, Varin and colleagues are furthering their eCognition work to refine the approach and provide forest managers with new seeds of information for their management operations. 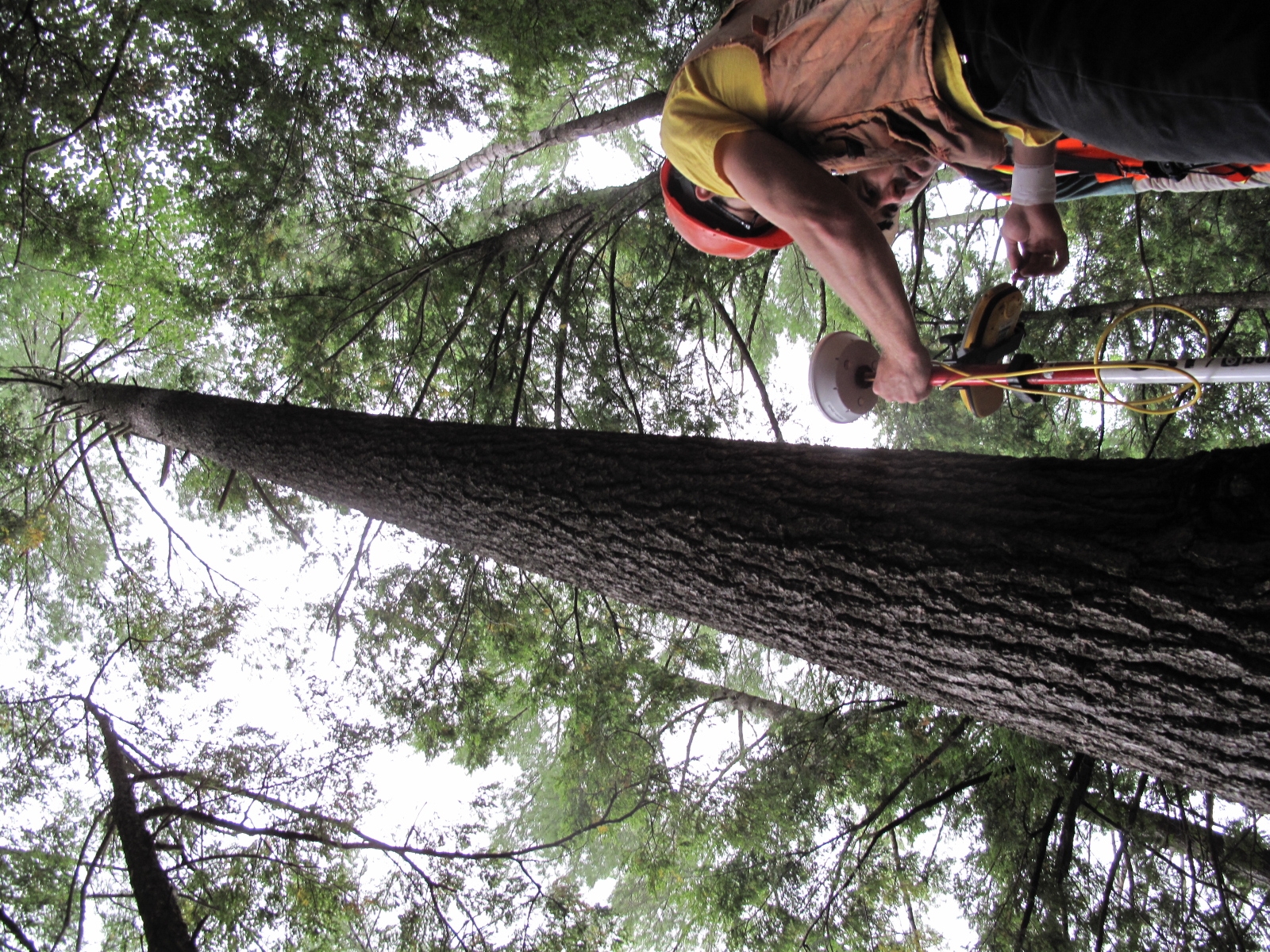 Antoine Desrochers and Philippe Bournival use a Trimble GeoXH 2005 GPS receiver to capture details on a White Pine tree.

“A significant research and development advantage with eCognition is that it’s incredibly teachable,” Varin explained. “Through this project we developed a workflow with which we can repeat the same process, or we can challenge the software to extract a whole new set of details that we haven’t produced before. Because it absorbs various forms of data, strictly follows rules and adapts when the information or rules change, it really is an ideal student.”

Such a learning environment could lead to exciting new branches of tree analysis for the serious business of forest management.