Baltic Avenue and Beyond: The Geography of Entertainment

These days we could use a little fanciful diversion, but of course we want to maintain our geographic awareness. In past articles I have written about the geography of sports, music, libraries and museums, all of which can be considered entertainment. (And for many of us, anything about maps and geography is entertainment!) Now I am going to expand the scope and look at some other types of entertainment that feature maps and geospatial technologies in many types of media.

There’s entertainment on the small screen …

I’m not much of a TV watcher, but these hot smoke-filled weeks in southern Oregon have given me an excuse to stay indoors. (I’m catching up on reruns of “Jeopardy” mostly, good for the geo-brain.) Along with “Jeopardy,” geospatial technologies show up in surprising places. For geo-geeks like us, we pick up on every reference to geospatial technologies, even something as mundane as two city officials having a conversation outside the GIS office in the fictional city of Pawnee, Ind. in “Parks and Recreation.”

Mostly, though, geospatial technologies appear in crime and action dramas, such as “Unbelievable" and the “CSI” franchise. There is a short thread on Reddit.com in which folks offer their favorite GIS scenes on these shows and others. Although not always portrayed authentically, these examples are useful for illustrating how maps can solve, or at least address, different problems and challenges. One authentic example was CBS’s “The District,” a police drama set in Washington, D.C. It was a collaboration with Esri, and they used real operations in ArcView 3x. If you watch clips from the episodes (and if you remember ArcView), you can see they’re actually doing GIS tasks. Buffers and “Select by Location” show up a lot.

There are also plenty of maps about TV land. Various versions of “The Most Popular TV Show in (or Set in) Each State” appear on Mental Floss, Business Insider and Fortune. The methodologies are different, as are the dates, but they are interesting ways to get people involved with geography.

… and on the big screen:

Every movie is set somewhere, and every movie is filmed somewhere. But … are these places the same? Sometimes they are filmed on location, but not always. In the early 1900s, as the movie industry began to explode, Southern California became America’s movie capital. Along with many other geographic advantages (mild climate, easy transportation and lots of extra land), Hollywood offered what few other places could: access to incredible geographic diversity. A fold-out map in the Sunday Los Angeles Times in 1934 illustrates how the Sierras could be Siberia or the Alps, and the Central Valley could be Kansas or Chinese rice fields.

In this digital age, a place can be built from nothing. At the 2017 Esri conference, Disney’s Imagineers team showed how they developed the city of Zootopia using Esri's CityEngine software. This is yet another example of how geography can take us from the known to the unknown, or even create the unknown.

Maps on the Screen and on the Table

Games of any kind stimulate the brain, whether digital or analog. The psycho-physiology of this is way beyond the scope of this article, but many studies have shown that certain parts of the brain respond to spatial stimulus.

Since the Atari 2600 days I haven’t played video games, but I’ve spent enough time with my nephews to see plenty. One of their favorites is Minecraft, in which you can build maps of entire worlds. The details are way over my head, but I found many forums where people from various games share maps and tips on how to make them.

Long before digital gaming, I learned the essentials of cartography by playing Dungeons & Dragons. Don’t laugh! With graph paper and colored pencils, I taught myself the basics of scale (one square is ten feet), classification (brown is desert, green is forest) and symbology (black triangle is a cave entrance, red dot is a trap, blue line is a river). In the early digital age, I learned the spatial and temporal geography of the Caribbean Basin playing Sid Meier’s Pirates! (which actually helped me with a capstone project in an Anthropology course).

Then, think about how board games taught us spatial literacy. Obviously, there are the war games like Diplomacy and Risk. Yet most board games have a geographic component, including versions of Monopoly for college campuses and National Parks. Clue takes the detectives from room to room. Even Candyland requires spatial awareness!

Such is described Treasure Island in Robert Louis Stevenson’s classic novel. The map itself defines the entire plot, passing from hand to hand among heroes and villains. How many books tell tales of journeys through lands and water, both fictional and real? “Lonesome Dove” takes us from Texas to Montana; the Sherlock Holmes stories show us the underside of London; “The Lord of the Rings” epic spans an entire fictional world, meticulously mapped.

Exciting as the books are, how do we contextualize these epics, especially for students, and illustrate the interconnection between literature and geography? Fortunately, the brilliant folks on Esri’s education team have built a series of standards-based lessons, GeoInquiries, to do just that. These are short exercises in ArcGIS Online that require nothing more than a web browser, with topics ranging from banned books to Mark Twain’s journeys across America. 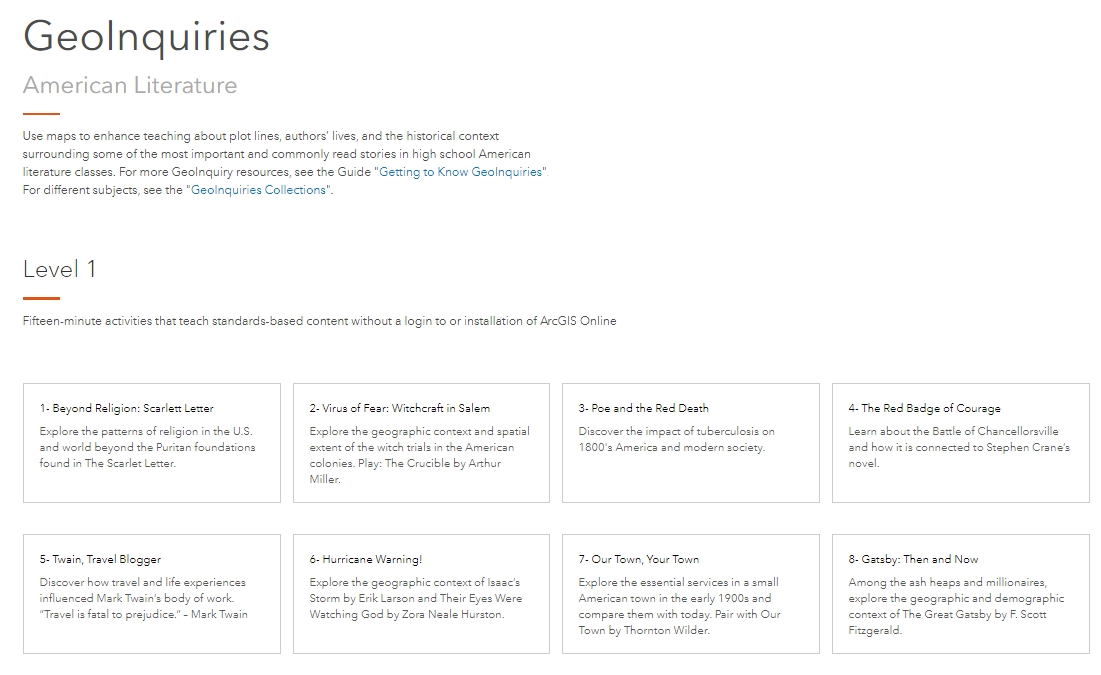 One of the first maps I ever hung on my wall was a souvenir — a visitor map of Kings Island Amusement Park in Ohio. Of course, it was a cartoon, but like all visitor maps to natural parks, amusement parks and museums, even shopping malls, it was effective enough for navigation. (Not that I was doing much navigation at age six.)

Delving deeper into this theme, I searched for “Amusement Parks GIS,” which turned up some interesting results, such as how to make amusement park-style maps in Arc, which could come in handy for public meetings and lay audiences, and many links to AGOL maps. There were also hundreds of references to various story maps and web maps, such as fast-food locations around theme parks.

According to the International Cartographic Association’s Commission on Map Design, an artist working for the Walt Disney corporation created the first theme park cartoon map, primarily as a marketing tool to tantalize investors with Disney’s grand vision. I discovered this reading Barbara Kerby's article "Amusement Park Maps Save the Day," which is a really interesting read. Kerby not only touches on the history and techniques of amusement park maps, but also on their power to literally transform minds. It is an inspiring story about how a young man with Asperger’s became a map-head.

As fun as they are, theme parks are also big business. People love to be entertained and escape reality for a day or two, and gladly pay for that experience. Esri even has a platform for businesses to leverage demographic data to find potential markets. Although the data is somewhat dated, it is an illustration of how GIS is scalable and can be applied to almost any endeavor.

At a more granular level, a team from Disney Research Zurich developed “A simple framework to simulate the mobility and activity of theme park visitors.” Focused largely on Wi-Fi capacity, they used simulation software to model human movement and facility capacity, offering an interesting perspective on geospatial technologies in the build environment.

Entertainment is all about the people.

Obviously, Disney’s marketing map worked, since they are now one of the world’s largest corporations. In my many searches, I didn’t find what I was really hoping for: actual GIS maps. The maps I found showed what was on the ground, but not what was below or behind the walls.

Doing further research, still hoping to find GIS information, I discovered that in addition to its media empire, Disney has many other spheres of operation, including global security and event management. Disney manages the Global Security Communications Center, using geospatial technologies to facilitate security for emergency and non-emergency events. Thousands of people can be in a single place at one time, and these places are critical infrastructure, along with hospitals, dams and many others.

These are but a few examples of how entertainment can lead to enlightenment. Every story has a place, and every place has a story. And I did finally find a map of the legendary tunnels under the Magic Kingdom!

Into the Unknown: The Geography of Exploration
Shifting from Response to Recovery
Geoinspirations Podcast Series: Letisha and Garet Couch - Supporting GIS Through Teamwork
Location Data for Telecom Service Growth
The Value and Importance of GIS Librarianship at Universities
Understanding Redlining in America through GIS
Conservation, Restoration and Resilience: GIS for environmental restoration
How Thermal Infrared Mapping is Monitoring Our World
Esri’s 2022 Demographic Data Release Arrives in Time to Fill a Void
Spaceship Earth: The Science of Biogeography
Going Digital: Advancing Water, Wastewater and Stormwater Networks
Podcast: Data Organization and Management Strategies
This Planet Ocean: Mapping the Other Two-Thirds of the World
Open Data, Local Knowledge and Geospatial Technologies: Public Participation is key to disaster recovery