Although high-speed internet benefits rural and remote communities, the expense of building and operating high-speed internet networks makes the business case for investing in Fiber to the Home for lower population densities a challenge. A casualty of remoteness and sparseness, residents in these communities have had to contend with broadband speeds so slow that online learning happens in the middle of the night, streaming high-definition videos is nearly impossible, and telehealth services can only support one patient at a time.

Part of the expense of bringing FTTH to these communities is in acquiring the essential infrastructure data to design networks, a process traditionally performed by field crews collecting utility pole asset data using handheld GPS receivers, laser distance sensors, surveyor’s wheels, or even rough paper sketches –– methods that are vulnerable to rework from missed assets or inaccurate data collection.

“For a fiber build, you need to know the precise position of existing poles, the position and number of cables connected to the poles, the condition of the poles, and if they intersect with water or railway crossings,” said Eric Langin, director of implementation for Eagle Telecom, based in New Brunswick, Canada. “Those measurements need to be exact because the fiber cables are often prefabricated offsite. If your numbers are off, the cables won’t fit. And that’s a costly mistake.”

Bucking tradition, Eagle has replaced those boots on the ground with a vehicle-mounted mobile mapping camera and a real-time mobile GIS solution. 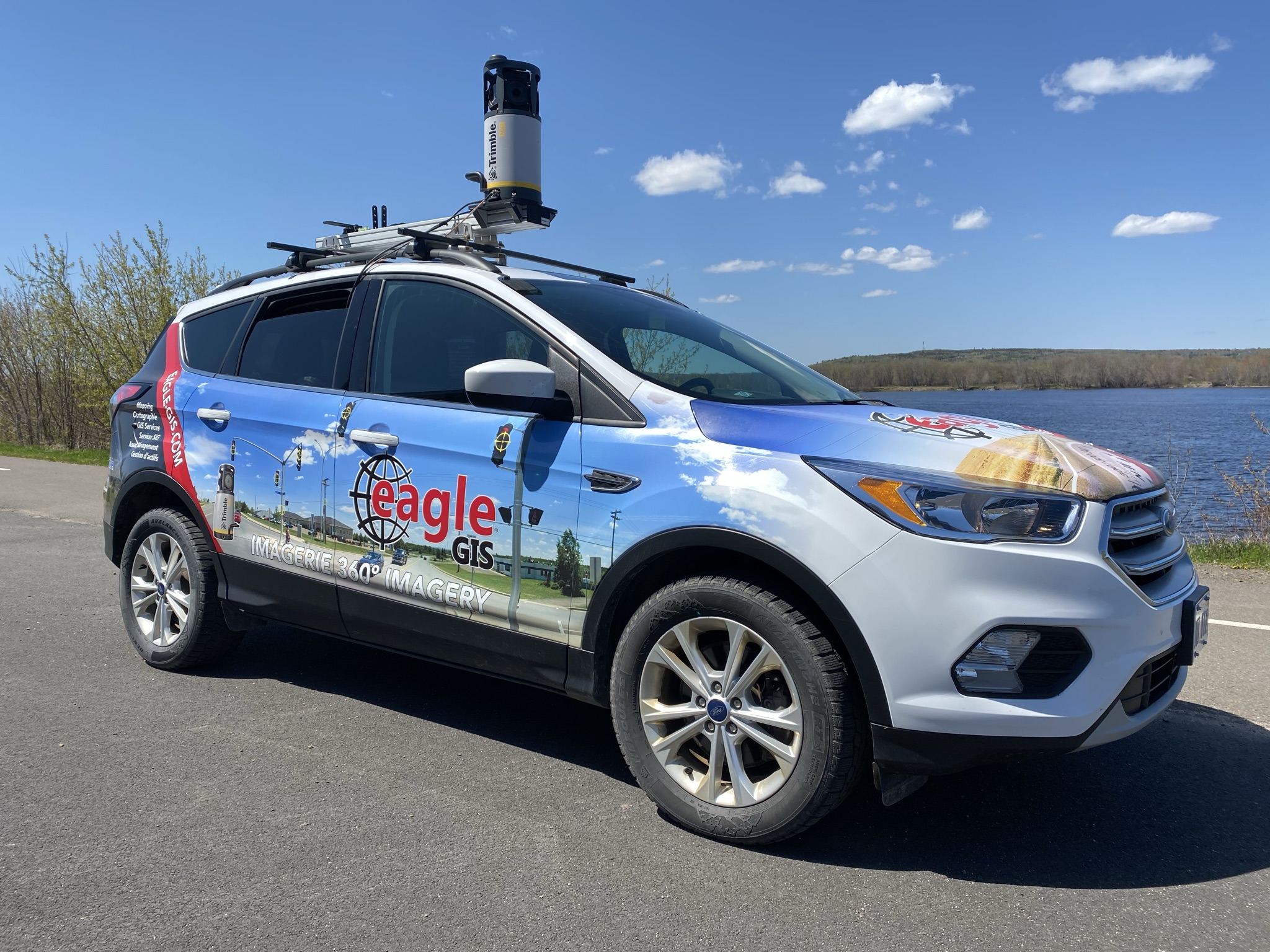 A unique approach in the telecom industry, the system has given Eagle the tools to help create the first-ever fiber network for an island community in New Brunswick, make high-speed internet a reality for a First Nations community in Cape Breton, Nova Scotia, and map 600 kilometers of Prince Edward Island in 2.5 days –– a task that would’ve taken 60 days conventionally.

Based in Fredericton, New Brunswick, Eagle has been delivering telecommunications solutions to some of the largest service providers in Canada since 1989. Providing everything from route selection to full turnkey project delivery, the company has grown into a specialist in FTTH projects, delivering data collection, engineering, design, permitting and GIS mapping solutions.

One reason Eagle has grown into one of the primary telecom consultants in Atlantic Canada is because it’s a disruptor in a conventional industry. They replaced pen and paper in the field long ago with GNSS technology and mobile GIS data-collection devices, and they have continually adopted advanced technologies that can improve their engineering, design and mapping services.

However, collecting decimeter-accurate field data has still been lengthy and risky.

“Even with GNSS, crews still have to walk the ground, and fight foliage and rough terrain to acquire pole positions and attribute details, which is time consuming and makes them vulnerable to inaccurate or missing data,” said Langin. “We often have to send an additional crew for traffic control, and for railway crossing surveys we need four people for safety, traffic supervision and cable measurements. So field collection was still putting crews at risk and it was time consuming. We knew it could be done more efficiently.”

When Langin discovered the Trimble MX7 mobile imaging system, he knew it could be the disruptive technology the company needed.

“With mobile mapping, all those terrain issues, safety issues and data inaccuracies go away,” said Langin. “We can drive at highway speeds and the 360-degree camera captures everything it sees. Typically, a person can cover about 10 kilometers a day with GPS; at 70 km/h, I can drive that same distance in 12 minutes. I capture significantly more data, it’s more precise –– 3 to 5 cm accuracy –– and I can make essential measurements unique to railway crossings from the office. The data detail also enhances our mobile GIS work, enabling us to be more efficient in the field.”

The system’s speed, precision and efficient GIS integration has not only provided Eagle with a new approach for urban telecom solutions, it’s made FTTH engineering, design and large area mapping in remote communities feasible.

Langin's first opportunity to prove the MX7’s worth was for a FTTH project on Grand Manan, an island in the Bay of Fundy about 17 nautical miles off the New Brunswick coast.

Local telecom company Crave Technologies –– another disruptor in the industry –– has been offering wireless internet service to the island’s population of 2,400 since 2006. In 2018, Crave’s president and CEO Howard Small launched Proximity Fiber, a new endeavor focused on providing high-speed internet to island residents. He tapped Eagle for the project design; Langin chose to use the rural location as a business test case for the MX7.

He first sourced road centerlines and imported the vector data into the system’s software loaded on a laptop. He then took a two-hour ferry ride to Grand Manan. Finding his start point, he set up a Trimble R2 GNSS receiver on a tripod and used static observation to collect a control point. With the camera mounted on top of his vehicle, he drove the island’s main roads at 70 km/h as the MX7 captured a 3D image every 5 meters and tracked the vehicle’s trajectory. In 10 hours, Langin covered 125 kilometers –– including driveways –– and collected 150,000 images and 3,700 poles.

As he drove, he noted in the system’s software any road sections with backlots, areas where poles are located behind houses or buildings and are obstructed from the camera’s view. Those locations could then be extracted from the images, plotted on a GIS map and pushed to a crew’s mobile device in the field.

He also selected a 12-kilometer route and conducted a comparative field-data collection test between traditional walking GNSS surveys and mobile mapping. It took one two-person crew seven hours to capture the 200 poles along the route; Langin completed it in 12 minutes at 70 km/h, a time savings of 93 percent.

“I ran a few ground-survey tests in Grand Manan to ensure the accuracy of the camera data,” said Langin. “And the MX7 consistently provided 3 to 5 centimeter accuracy. After that, we stopped sending field crews for the majority of the work.”

Back in the office, Langin and his GIS team downloaded the images using Trimble’s mobile image processing software. They input the control point position from the field and used the Applanix POSPac™ MMS software workflow to directly georeference all 150,000 images. From there, they used Trimble MX Asset Modeler software to extract individual pole locations from the images.

After the pole positions were collected, they were exported as a shapefile and imported into ArcGIS to plot each pole on a map. Once those assets were in position, wire strands were created to connect each pole, along with each pole’s ID, type and service level –– how many people are served by that pole.

“Another significant benefit of the MX7 is we can determine the precise position of the telecommunication point on the pole,” said Langin. “With a ground survey, only the bottom of the pole is measured. But if a pole is leaning, that impacts the length of cable required to connect to the next pole. Unlike GNSS surveys, mobile mapping accounts for that because we can see the lean in the image and we can grab a coordinate for that point instead. That not only increases the accuracy of our base map, it makes our materials costing more precise, which could yield significant savings in ordering cable.”

Simultaneous to that mapping, a field crew was capturing backlot assets. Using the Esri Collector app, the team could readily see which poles were missing and use the R2 receiver to collect those assets, as well as update any required attribute fields such as homes passed or pole tags. That data was pushed back to the office in real time via ArcGIS Online, enabling the GIS basemap to be updated as information came in. Based on the finished pole map, Eagle was able to determine measurements specific to various permitting requirements, calculate and order the amount and size of fiber cable needed, and map and design a full FTTH network on Grand Manan for Proximity Fiber.

To date, fiber connections are available for 600 homes and Small plans to have high-speed internet obtainable for 99 percent of the island by 2022.

“This project marked the first fiber build using mobile mapping in Atlantic Canada, and likely the whole country,” said Langin. “It also proved the business value in this approach and gave us the confidence to retool existing work and pursue other rural projects.” 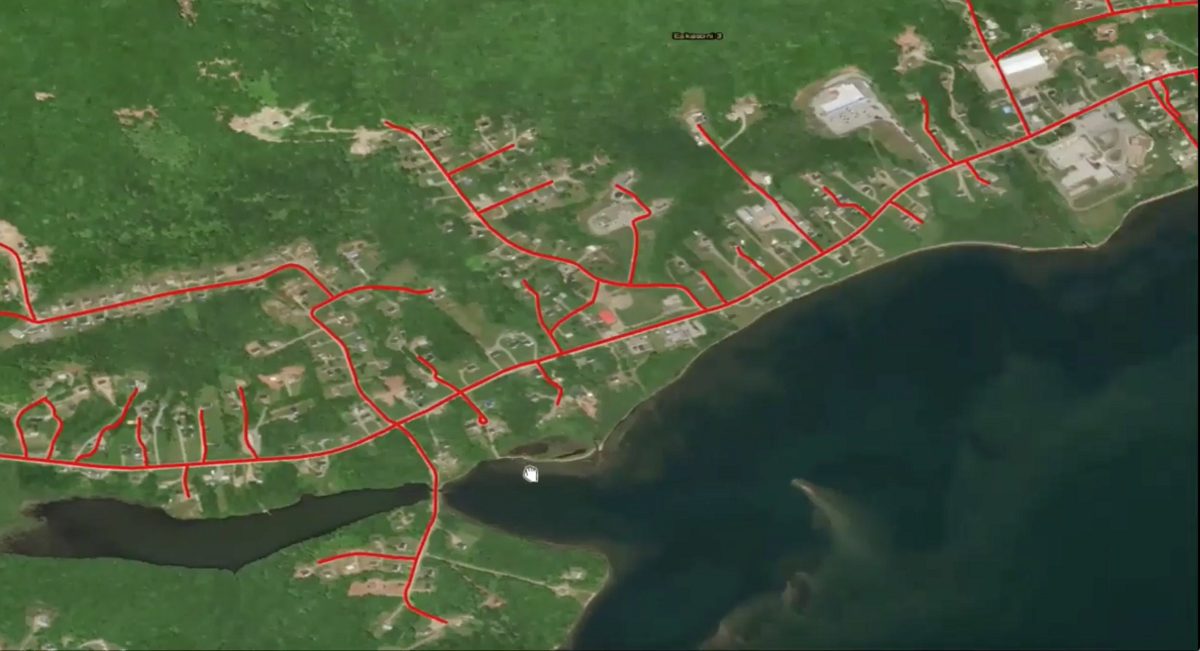 Assured in its mobile mapping/GIS solution, Eagle began porting its approach to other rural regions in neighboring provinces.

Soon after Grand Manan was a fiber build in Eskasoni, a First Nations community of almost 5,000 people and 1,200 homes in Cape Breton, Nova Scotia. They mapped 31 kilometers, fulfilled permitting measurements, calculated building materials including cable volumes, and designed the FTTH network. By the end of 2020, Eskasoni’s fiber-optic network was installed and Eskasoni Communications started connecting customers to broadband last March –– a first for the community.

That was followed by numerous projects all over Atlantic Canada, including a 600-kilometer fiber project in Prince Edward Island, and today, Eagle has fiber builds at different stages in New Brunswick, Nova Scotia, PEI and Newfoundland.

“We’re the only company in Atlantic Canada that is serving the telecommunications industry with this approach,” said Dan McCarthy, Eagle’s president. “Adding mobile mapping to our GIS expertise has driven the creation of two divisions (Eagle GIS and Eagle Municipal), it’s employing more people than we are taking out of the field, and it’s giving us a unique offering that we only see improving.”

Indeed, with its traditional telecommunications work booming, Eagle launched Eagle GIS to support its telecoms solutions and Eagle Municipal to expand its mobile mapping/GIS solution into other markets.

Given its growth, Eagle Telecom may indeed disrupt convention again.