Coincidence, Correlation or Causation? The Geography of Mysteries

In 1992, my best friends and I visited Egypt, and along with many other adventures, we had the opportunity to visit several of the pharaonic pyramids. As you might imagine, they were awe-inspiring. Neither photography nor videography can capture the massiveness of these structures. Some other tourists dared to climb them (illegally), but I didn’t get beyond the first tier at the Great Pyramid of Giza, and that was just for a photo op.

It made us wonder how humans could build such massive structures before the wheel and any kind of sophisticated machinery. Or, we speculated … were they not built by humans at all? Ancient alien theories abound, along with UFOs, Sasquatch sightings and many other elements of what is generally called pseudoscience. Pseudo though it may be, people have used scientific techniques to support these theories, including geospatial technology.

In this article we’ll explore some of these techniques for mapping the unknown, and then examine some of the real mapping methods that ancient civilizations used to plan their monumental architecture.

… not Superman. Unidentified Flying Objects are real, and ”UFO” is a term used in both civilian and military air traffic control operations. UFO means just that: an unknown object in the sky. In recent years, the most common UFOs have been drones flying illegally in restricted air space. But for decades, there have been people who are convinced that some of these UFOs come from outer space.

On AGOL, an animated map of reported UFO sightings shows interesting patterns from 1997 through 2015. Two patterns emerge: The number of sightings increases year by year, possibly because they became easier to report with mobile phones. More interestingly, most of the sightings appear in urban areas, which have much more artificial light.

Another interactive map narrows the reports down to findings that were investigated by a special team of the U.S. Air Force between 1947 and 1969, which was the height of the Cold War. There are reports of abductions, cattle mutilations, crop circles and more. Real? Credible enough to be investigated, apparently.

We can’t talk about pseudoscience without mentioning The Flat Earth Society. In middle school, one of our science teachers hosted an after-school “chapter” of the FES. I never went, but my brother did. It was basically a sneaky way to teach about geography, geodesy and the scientific method. The students used maps, telescopes and a globe to prove the Earth was a flat disk, and of course, they failed.

Long before Columbus and Magellan, ancient mariners knew the Earth was round. Polynesian and Micronesian sailors are arguably the greatest seafarers in human history. They colonized the Southwest Pacific, including Easter Island, without a compass or map, instead using celestial navigation and their famous stick charts. On the other side of the world, observers from the great lighthouse of Alexandria noticed that the top of a ship would appear before the hull when returning.

… is the subtitle of a fascinating book by Mario Livio, PhD., head of the Hubble Space Telescope Institute. Phi is also known as the golden ratio, an irrational number like Pi that never ends. Pi is the ratio of a circle’s diameter to its circumference, and in the words of the ancient Greek mathematician Euclid of Alexandria, Phi is the “extreme and mean ratio … as the whole line is to the greater segment, so is the greater to the lesser.” That sentence is dense, and so is Dr. Livio’s book.

Phi shows up everywhere — in nature (nautilus shells and sunflowers), in art (“Mona Lisa” and the “Last Supper”), and in architecture, (historic, modern and ancient). Although defined by Euclid circa 300 B.C., there is empirical evidence that it was known thousands of years before that.

When I visited the Pyramid of Saqqara (the oldest surviving Egyptian pyramid) and the Great Pyramid at Giza, I was a 22-year-old archaeologist, not a geographer, so I didn’t pay much attention to their spatial alignments. Only decades later did I learn about their relation to true north, which was only a few decimal minutes off the current alignment. That’s not bad for 5,000 years of the Earth’s rotation! 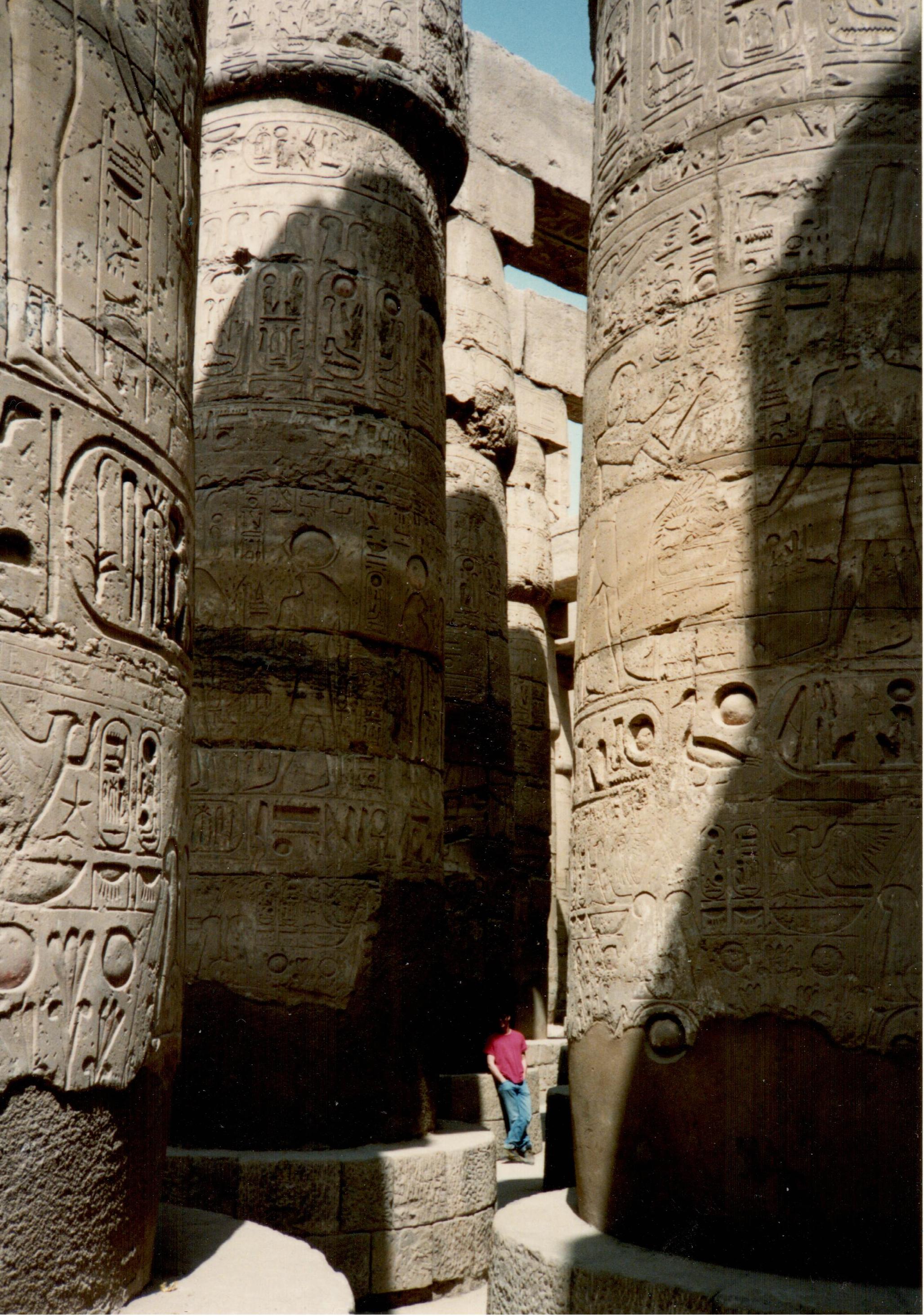 Correlation and coincidence are not causation.

Most of us learned this in our basic science courses, but some coincidences might make you wonder if there is some kind of causation. The wonderful “Wooden Books” series delves deep into these topics. The titles include “Sacred Geometry,” “A Little Book of Coincidence,” “Earth Moon and Sun,” and several others.

Angkor Wat in Cambodia is the largest known religious structure in the world, encompassing over a thousand buildings over more than 400 acres, and like the pyramid complex at Giza, is a world heritage site. It was built in the 12th century A.D., more than 3,500 years after the pyramids of Giza.

On the arid coastal plain of Peru, the Nazca Lines are enormous geoglyphs, lines carved into the sand and rock, some measuring as long as 1,200 feet. They were created sometime in the 100-700 A.D. era. Incomprehensible from the ground, aerial views show depictions of animals, plants and a human figure called the Astronaut.

The distance from Giza to Angor Wat is 4,745 miles, and from Giza to the Nazca lines is 7,677 miles; 4,745 * 1.618 (Phi) = 7,677 miles. These form an antipodal line around the Earth, and along the way, right on the arc, lies Rapa Nui (Easter Island), whose iconic humanoid megaliths (moai) were built over several centuries between the ninth and eleventh centuries A.D.

This arc is shown more dramatically in an animated video using Google Earth. Another site also discusses the location of ancient structures in the golden ratio, including the Pyramid of the Sun at Teotihuacan, Mexico. You may need to translate the text, unless you speak Russian, but the Google map illustrates the pattern quite well.

Absence of evidence is not evidence of absence.

This is another axiom we learn in science, and one I reiterate, especially to archaeology students. Just because you haven’t found it, doesn’t mean it doesn’t exist. Presenting at a conference for Northwest outdoor writers, my audience was small but diverse, and included hikers, yachtsmen, photographers and many others, including Sasquatch (aka Bigfoot) seekers.

Part of my talk was about Crater Lake National Park’s natural sounds monitoring program, the goal of which was establishing a baseline of the natural soundscape. We identified many interesting sounds, including bugling elk, airplanes, gunshots and a porcupine snuffling by the sound station. I played several of the recordings, which were only a few seconds long.

When we couldn’t identify a certain sound definitively, we just called the file “Sasquatch” (then “Sasquatch2,” etc.). For us it was a joke/filler, but the Sasquatch folks immediately grabbed on to it when they saw the file name, and asked if they could have the recordings and the GPS coordinates. Sure, it’s public information. Hand me your thumb drive.

Apparently, the hunt for Bigfoot has been going on for decades. A graduate student at Penn State condensed 92 years of Bigfoot sightings into an infographic that appears to be the converse of the UFO sightings. Urban areas have fewer reports than sparsely populated areas in the Pacific Northwest. While the methodology and symbology require some time to digest, the infographic and associated map are excellent examples of how different databases can be combined to tell a story, apocryphal though it may be.

Is there a true answer?

Ancient civilizations built observatories to plan their plantings and harvests, predict eclipses and measure the Earth. Stories from North American and Asian cultures tell of mysterious man-like creatures in forests and mountains. Even President Jimmy Carter reported a UFO sighting.

Did ancient aliens visit the Earth thousands of years ago? Did a Higher Power set the universe in motion with some intentional design? Maybe we humans figured it out ourselves, with a collective consciousness based on millennia of stellar observations.

If I were to offer any opinion, I’d probably be wrong. Regardless of the cause, our world, both ancient and modern, natural and cultural, is filled with amazing geographic geometry and coincidences. Whether you are in the field or in the office, take a moment to look at the stars, or just a leaf, and see the wonders right before your eyes.