Understanding Redlining in America through GIS

There is an apocryphal story in my family about how my Black, West Indian grandparents couldn’t purchase a home in New York’s Lower Hudson Valley where they were renters. As the story goes, the White family my grandmother worked for bought the house with my grandparent’s money and later transferred the house to them. There are some holes in this story, but it wouldn’t be unheard of in New York, or most of the United States, in the first half of the 20th century. As a documented map geek and data detective of sorts, I was intrigued to find out more about how this played out across the country.

If you live in the United States, it’s likely that you live in an area that was highly segregated by race and economic status in the early 20th century. Neighborhoods have become more diverse since the 1900s, but the original composition of neighborhoods can be long-lasting, and in some areas things have not changed much at all. In the 21st century, most of the larger cities in the United States tend to be highly racially and ethnically diverse. Areas outside the cities are less so, but are still fairly diverse. But if you start zooming in and looking at neighborhoods, you’ll notice that some of these “diverse” cities are actually highly racially and/or economically segregated. Over the years, geographers have tried to explain why cities look the way they do in terms of race, and why some communities have such a stark difference between White residents and residents of other ethnicities in terms of wealth and where they live. Maps have been and continue to be at the center of this conversation.

In the early 1900s, racially restrictive covenants were added to property deeds across the United States to keep certain people from living in neighborhoods occupied by White people. If you were Black, Hispanic or Latino, Asian, Jewish, an immigrant, or any one of a number of other marginalized populations, you could not own a home with one of these covenants attached. In some cases, you couldn’t even rent or occupy such a property.

Generally speaking, homes at that time were purchased with cash or with the assistance of private loans. In 1933, as part of the New Deal, the Home Owners’ Loan Corporation was established to offer financial assistance to homeowners in danger of foreclosure. In order to determine where to invest with the least risk, HOLC assessors created “Residential Security” maps of most of the major American cities. These maps used a combination of characteristics to classify neighborhoods, and coded the most desirable neighborhoods Green or (A). These areas were composed of almost entirely White or Caucasian residents. The less desirable Blue (B) and Yellow (C) areas were a mixture of White residents and immigrants of higher economic status. The least desirable or “Hazardous” Red (D) neighborhoods were composed primarily of Black residents. 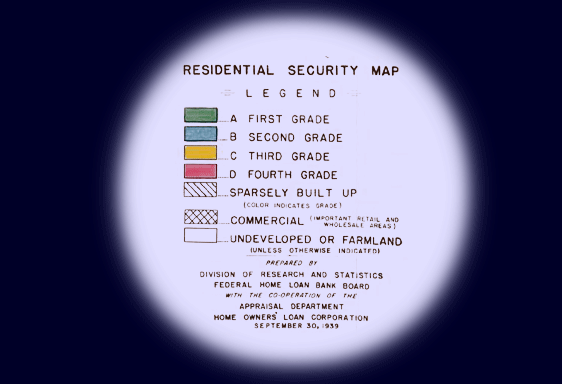 These maps and classifications were used by loan officers, appraisers and real estate professionals to evaluate loan risk specifically for home mortgage loans. Not surprisingly, the “Hazardous” neighborhoods were areas where lenders were either not willing to make loans or would make loans with poor terms for the borrower. This practice has become known as “redlining” and is the subject of a number of studies across the United States.

According to the National Community Reinvestment Coalition, 74% of the neighborhoods that the HOLC graded as high risk, or “Hazardous,” in the early 1940s are low-to-moderate income today. Almost 64% of these so-called “Hazardous” neighborhoods are majority minority neighborhoods today. We know this because of multiple projects around the country dedicated to identifying, documenting, and mapping these neighborhoods and the individual properties and associated deeds.

Prologue DC is a team of historians in Washington, DC, focused on telling the story of the City. The team is leading a long-term project called “Mapping Segregation in Washington DC,” in which members have been identifying and mapping properties in DC that have or had racial covenants. The goal of this effort is to display – through interactive online maps – the historic segregation of Washington’s housing, as well as its schools, playgrounds and other public spaces, and show how Washington, DC has been shaped by this segregation.

Projects like “Mapping Segregation in Washington DC” and the University of Minnesota’s “Mapping Prejudice” are excellent examples of how we can use GIS to document and understand the past. In my opinion, it’s critical to highlight these historic injustices and inequities so that everyone has some level of understanding of them and their impact on our society and culture. People who have experienced redlining and communities that are still experiencing the effects of redlining know all too well how it impacts them, but, as the “Mapping Prejudice” website says, “...the resulting physical, emotional, and financial baggage has been harder to recognize for people who have not personally experienced racism.” “Mapping Prejudice” and others endeavor to make these experiences visible by documenting these important data and presenting them in map form, which is easily accessible to people of all walks of life.

Challenges in Understanding the Problem

“DC data has been really challenging, because for one thing, our [DC] deeds are only digitized since 1921,” Sarah Shoenfeld from Prologue DC said. She wonders when the next set, 1900–1921, will be digitized, as the Recorder of Deeds has to identify a budget to make this happen. The digitizing process is funded by fees taken in by the office for other services, and only when there is enough in the budget can it happen. While there might be an opportunity to find the same records from other sources, there are finite resources for such projects.

And it’s not just DC. Harry Samuels, a data management and GIS specialist, has been researching how “disamenties” impact housing price and value in Richmond, Virginia. Disamenties are the opposite of amenities. Instead of schools with high graduation rates or good quality healthcare facilities, disamenties are things like abandoned or blighted buildings, vandalized properties, vacant properties, etc. The plan was originally to understand the relationship between neighborhood disamenties and housing price, using spatial regression. His theory was that proximity to these disamenties negatively impacts the price, and that these disamenties were concentrated in communities of color. Samuels wanted to know: how much do these disamenties impact the price, and how has this changed over time?

Unfortunately, the data Samuels needed were not available at a granular enough level to adequately run the model that he’d intended, and he had trouble finding data or maps that would show the patterns that he suspected were there. In some cases, maps were available but not at the same level of detail; one area might be at the Census Block Group level and another at the Census Tract level. He was, however, able to show a connection between the historic redlined communities of the 1940s and 1950s and the current areas of concentrated disamenties, supporting the NCRC’s findings that many of these communities that were the subject of restrictive housing policies based on race are experiencing the effects of the policies as recently as 2018.

Challenges like these are fairly common for researchers focused on population and related data. Some maps only exist in analog (paper) format, some are only available for certain years, and some are lost in the basements of archives all over the country.

I have yet to find out whether my grandparent’s home or community had a racial restriction on home buying, but it’s one of the projects on my list. I know that there was redlining in the region, as I’ve found several articles to attest to the fact, but access to information is limited by my distance from the local assessor’s office and the amount of information available to the public on the assessor’s site. I hope to find a repository similar to those at the University of Minnesota and “The Seattle Civil Rights & Labor History Project,” but until then, it’s just a story that I’ve heard around the holiday table.

If you’re interested in learning more about redlining and how maps are helping us to understand this history of housing and place in the United States, please take a look at this sampling of resources:

Rothstein, R. (2018). The color of law: A forgotten history of how our government segregated America. Liveright.