Author’s note: In this article we’ll explore how geospatial technology has been and is being used in ecological restoration efforts at scales from local to global. However, much of the content will focus on my home ground of the Klamath Basin in southern Oregon and northern California, because there is so much important work going on here.

What does ecological restoration mean?

In other words, what are we restoring for? Conservation for healthy systems, restoration to historic conditions and/or resilience to changing conditions? The three are not mutually exclusive. Do we want to protect places and systems that are currently functional, restore them to previous conditions, or modify them to be able to adapt to changing conditions caused by anthropogenic factors, including climate change? In the various case studies below, I’ll give examples of all of these goals.

Dynamite in a day … or restore 0.1 miles per year?

To restore a wetland, it took 100 tons of TNT. I remember October 30, 2007, when The Nature Conservancy blew the dike on the Williamson River Delta just a mile from home. Previously, the delta had been diked and drained and turned into very productive farmland, but the process had completely disrupted the seasonal flooding of the delta and, consequently, habitat for many species — fish, fowl and flora. TNC purchased the northern portion of the delta and began restoration efforts, culminating in the “big blast.” This reconnected the delta to Agency Lake, recreating the natural seasonal flow of wetland flooding and desiccation.

Within a few years, native plants and wildlife returned. Every day I drive by it, and it makes my heart soar. GIS played a critical part in this massive undertaking, with careful mapping of land ownerships and land use, vegetation types and many other factors. 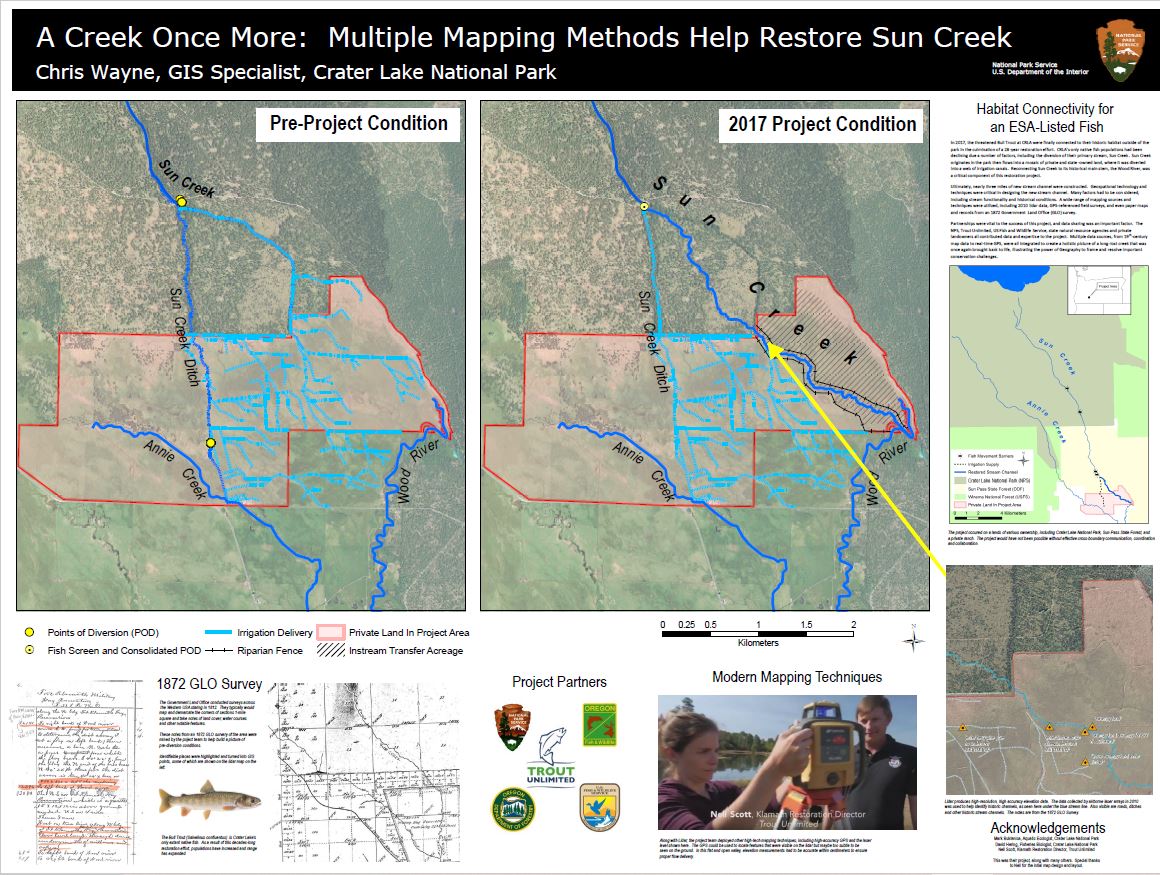 On the other hand, the restoration of 2.5 miles of Sun Creek took 25 years. After decades of being a “clogged artery,” this habitat for native bull trout was reconnected to the Wood River, and thus, to the entirety of the Klamath Basin. I was fortunate to play a part in this effort, albeit a small one. Mostly, I made maps of the area for field crews, but I did have the chance to go out and help eradicate invasive brook trout — GPS in hand, of course. The principals on the project used every mapping method they could, from laser transits and lidar to 1800s field notes from the General Land Office (the precursor to the Bureau of Land Management). While the National Park Service was the lead agency in the effort, there were many partners, including Trout Unlimited, the U.S. Fish and Wildlife Service, private landowners and numerous others.

Are we living in the Anthropocene?

This is a question I ask my students on their final exam, after we have covered a full term of Environmental Law and Policy. The geological time scale is so vast that we humans are but a tick on the Earth’s clock, yet we have managed to create a tremendous impact during our short time. Hiking to the bottom of the Grand Canyon, and up again, I see billions of years of Earth’s history in a few hours. Once at the top, I see massive changes that have been there for only a dozen decades — buildings, cars, invasive elk, the railroad, and mules, to name but a few.

Between ancient geology and modern infrastructure, various Tribes have modified the landscape there over many centuries, as illustrated in a map series by the Grand Canyon Conservancy. Most of these maps are static, but at the bottom is an interactive map showing photos and stories of the various Tribes and their relationship with the canyon. Along with a static map, the Grand Canyon Trust has interviews with people from various Tribes describing their goals for stewardship in the Greater Grand Canyon area.

The argument behind the Anthropocene theory is that as a species, we have changed Earth's climate, geology and hydrography so massively that we have literally created a new geologic era. The Breakthrough Institute made a series of maps illustrating the causes and effects of the Anthropocene. A similar story map includes case studies, photos and animations from around the globe, and there is an interesting cartogram about the subject. Although the cartogram has no legend, the patterns are clear to see — population, lights, shipping routes and others.

So goes the first line of my wife’s graduate school application. But plants need people as well. If we truly are in the Anthropocene, humans need to be part of the solution, whether on the local or global scale. Much environmental degradation is due to poverty. People need to feed themselves and their families at the very least, and beyond that, create a brighter and more sustainable future for their posterity.

The Nature Conservancy serves as model for the inclusion of people in conservation. Their 2020 Geospatial Conservation Annual Report offers 22 case studies, most involving local communities. As these case studies and the examples from the Klamath Basin indicate, restoration is impossible without people working together, and of course, much more challenging without geospatial technologies.

In 1995, the two largest restoration projects in Oregon were taking place at the same time, within a few miles of each other. Unlike the Williamson Delta project, on only private land, The Wood River Delta Restoration Project was more complicated. The goal was the same: to restore sinuosity and riparian vegetation, thereby increasing water quantity and quality while decreasing temperature. Like the Sun Creek project, there were many actors. The BLM owns the delta itself, but upstream and adjacent is a mosaic of land ownership — private, federal, county and state.

Our late (and great) senator, Mark Hatfield, formed a working group for restoration in the basin. With consensus from farmers, Tribes and other stakeholders, some seemingly simple goals were agreed upon: cleaner, colder water, and more of it.

While the goals were clear, the methods to make them happen were not. The 10-million acre Klamath Basin is one of the most complex watersheds in the West. Most basins in the western U.S., including the vast Columbia and Colorado basins, begin in the mountains and are fed by snowmelt, then run through agricultural lands and urban areas. Conversely, much of the Klamath Basin’s water begins in agricultural areas in Oregon, and are fed by mountain snow as well as cold, freshwater springs. Once joined with other tributaries, the river rushes through the rugged mountains in California before it reaches the sea.

Before European settlement, the upper basin was a vast seasonal wetland — the “Everglades of the West” — and one of the most continuously inhabited landscapes on the continent. Settlement brought changes to the landscape: wetlands were drained and diked, rivers were channelized into straight lines instead of their naturally meandering courses, and dams were built. Consequently, fish on which various Tribal communities depended were nearly extirpated.

That brings us back to 1995. The Wood and Williamson rivers, and specifically their deltas, were seen as excellent candidates for improvement to reach the goals of improving water quality and quantity. As you can imagine, changing even a relatively small river’s course is a massive undertaking. GIS and other geospatial technology were critical in these efforts. 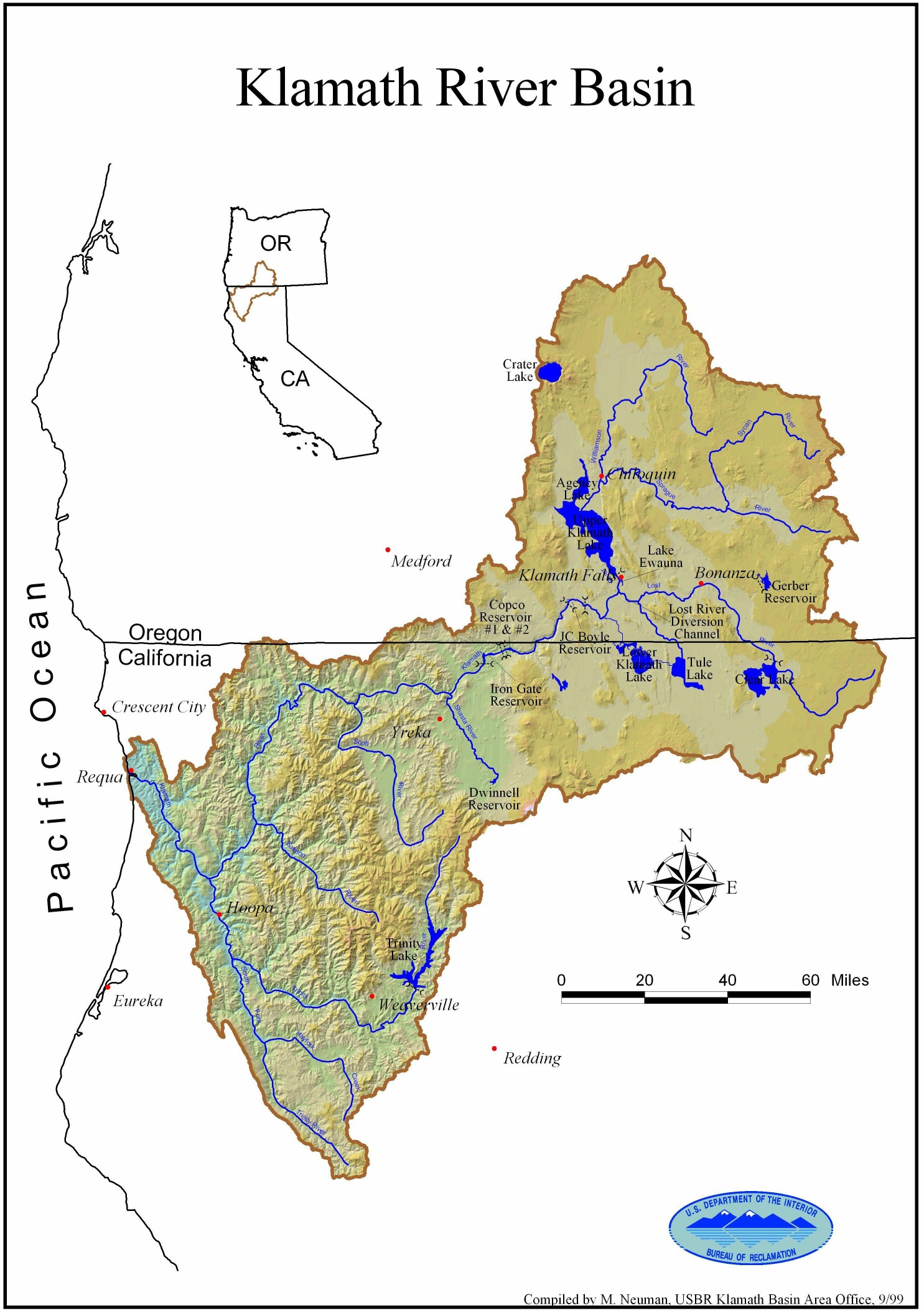 Ecological and environmental restoration is deep and broad, with many experts from overlapping and interconnected disciplines involved: geographers, historians, hydrologists, engineers, politicians, botanists, wildlife and fisheries biologists, on-the-ground stakeholders and many others, some of whose individual roles may overlap.

One excellent resource I discovered is “The Use of GIS to Facilitate Habitat Restoration,” by Michelle Denault, which has a superb annotated bibliography. Another is Esri’s site for Environmental & Natural Resources Agencies, offering case studies and resources on events, data and more.

I have to say that as an Oregon State alumnus, but it rings true on a much larger scale. Beavers can be a problem in urban areas, but many studies have shown that beavers’ construction projects improve water storage and water quality.

Having traveled through California’s Gold Country — where they made rivers flow uphill through massive 19th century wheels and channels — and having watched the Chicago River flow from Lake Michigan instead of into it, as it did for centuries, I know that human engineering can accomplish amazing feats, but to what end?

As the director of the Bureau of Land Management, Tracy Stone-Manning oversees 10 percent of the land in the U.S. With multiple missions, from managing sage grouse habitat to overseeing oil and gas leases (and an enormous enterprise GIS program), it is a tall order. However, near the end of her interview in High Country News, she sums up restoration efforts quite succinctly: “Nature is the best engineering we have on the planet.”