How Thermal Infrared Mapping is Monitoring Our World

Thermal infrared imaging is the process of capturing the longwave radiation emitted, reflected, or transmitted from the surface of an object. Although tools for sensing heat have been used for centuries, thermography began to be widely used in the 1920s as photography advanced and allowed for thermal data to be recorded as visible imagery. This trend continued in the 1970s when TIR was approved for medical use and was found to be a valuable tool for cancer research. Modern thermal imaging stores either a heat image representing relative temperatures or digital numbers for post-processing, such as calibration to absolute temperature values.

Over the past three decades, thermal technology has spread into a wide range of industries with varied applications: it is used in Formula 1 racing to assess tire conditions, in building inspections for heat loss mapping, and by the armed forces and law enforcement for nighttime tracking. It is also used in the health, infrastructure, and technology industries, in managing natural resources and in energy production. Airborne TIR collection adds an exciting dimension to many of these applications, especially due to improved TIR sensors and modern photogrammetric software which optimize remote sensing efficiencies. Here we discuss three remote sensing applications that are contributing to real world solutions.

River temperature is one of the most critical parameters for healthy aquatic habitats. River temperature patterns, or thermal regime, are a function of air temperature, channel flow, riparian vegetation and, most importantly, the river’s water source (springs, snowmelt, etc.). Carefully planned airborne acquisition of TIR imagery reveals an instantaneous picture of the river’s thermal state. This data supports analysis by stakeholders and practitioners in the natural resources community, allowing them to plan and execute river restoration projects.

NV5 Geospatial (through its legacy company, Watershed Sciences Inc.) has been supporting river restoration efforts for decades. In the late 1990s, airborne TIR imagery of the John Day River in Oregon helped researchers locate cold-water springs that support habitat for fish rearing and spawning as well as aid in the study of the influence of riparian vegetation on stream temperature.

Between 2001 and 2021, three TIR surveys were conducted along the Klamath River in Oregon and California, river stretches that had been heavily affected by four major dams constructed during the 1900s. The data showed that these dams and their operations have flattened the seasonal fluctuation of river temperature and caused a temperature stratification opposite to that found in a naturally flowing river. In combination with other pressures, the result has been a severe degradation of the economically and culturally significant salmon population and riverine habitat across the basin. The TIR data is also being used to help predict the biophysical response of the river when it becomes more free-flowing following scheduled dam removal.

Like in the case of the Klamath River, governmental agencies, tribal entities and private stakeholders across the United States and Canada have been using TIR imaging to map large and small river systems. In addition to locating cold-water inflows and refugia, TIR technology has been used to detect leaks and seepage from underground fuel reservoirs, determine the extent of cooling effluents from power plants, and measure the impact of riparian vegetation loss from fires on stream temperatures.

While most of the focus on renewable energy so far has been on solar and wind power, a significant opportunity exists in the form of geothermal energy. The U.S. Department of Energy estimates that the nation has tapped only about 0.7% of its geothermal resources.

In the past, geological field surveys were the primary method of finding geothermal sources. Specific minerals indicated ideal conditions; then, with maps of geological layers and the surrounding topography, geologists would make educated guesses on where geothermal energy could be leveraged. With TIR imaging, the search for geothermal energy can be better facilitated with widescale thermal mapping of potential source areas. A geothermal map of this sort provides a more accurate depiction of geothermal patterns in the landscape, which helps determine where to build facilities and improve production efficiencies.

A great example of how TIR imaging was applied to the ongoing development of geothermal production was a survey conducted at the Casa Diablo power plant near Mammoth Lakes, California. This plant taps into the Long Valley Caldera hydrothermal system, and its natural surface expression includes numerous zones with increased heat and gas emissions along with sporadic, yet noticeable, vegetation die-off. NV5 Geospatial conducted TIR surveys for the United States Geological Survey in 2017 and for the Bureau of Land Management in 2018. The goal of both surveys was to quantitatively analyze the ground temperature across the site. The thermal analyses considered the physical characteristics, such as surface emissivity and area, to calculate geothermal radiant emittance, heat flux anomalies and radiative power output.

The TIR surveys captured a nearby extent of Mammoth Creek, which runs just south of the plant, in addition to the Casa Diablo facility complex. Future TIR surveys will show if any thermal changes have occurred along the creek’s channel, which might be indicative of thermal pollution or, potentially, toxins introduced during the facility’s expansion as production scales up.

The National Bridge Inspection program mandates that our 617,000+ public bridges be inspected on at least a biannual basis. Traditional nondestructive inspection methods such as sounding, radar techniques, and van-based TIR inspection are effective but leave much room for improvement, both in cost and practicality. In some instances, traffic must be halted to complete these types of surveys. Airborne TIR collection has proven to be an effective tool for detecting near-surface structural deficiencies and can be done remotely, meaning it harnesses the efficiency of plane travel to survey dozens of bridges in a single lift.

Early damage detection can pay dividends because it saves on much larger repair costs down the road, potentially extending the overall life of the bridge. Over time, the steel rebar within the bridge deck begins to expand due to rust, putting pressure on the surrounding concrete. Subsurface cracks develop that become exacerbated by overhead traffic. These areas of delamination heat up faster than the surrounding concrete during solar loading and are easily detectable at the bridge deck surface using thermal infrared imaging. 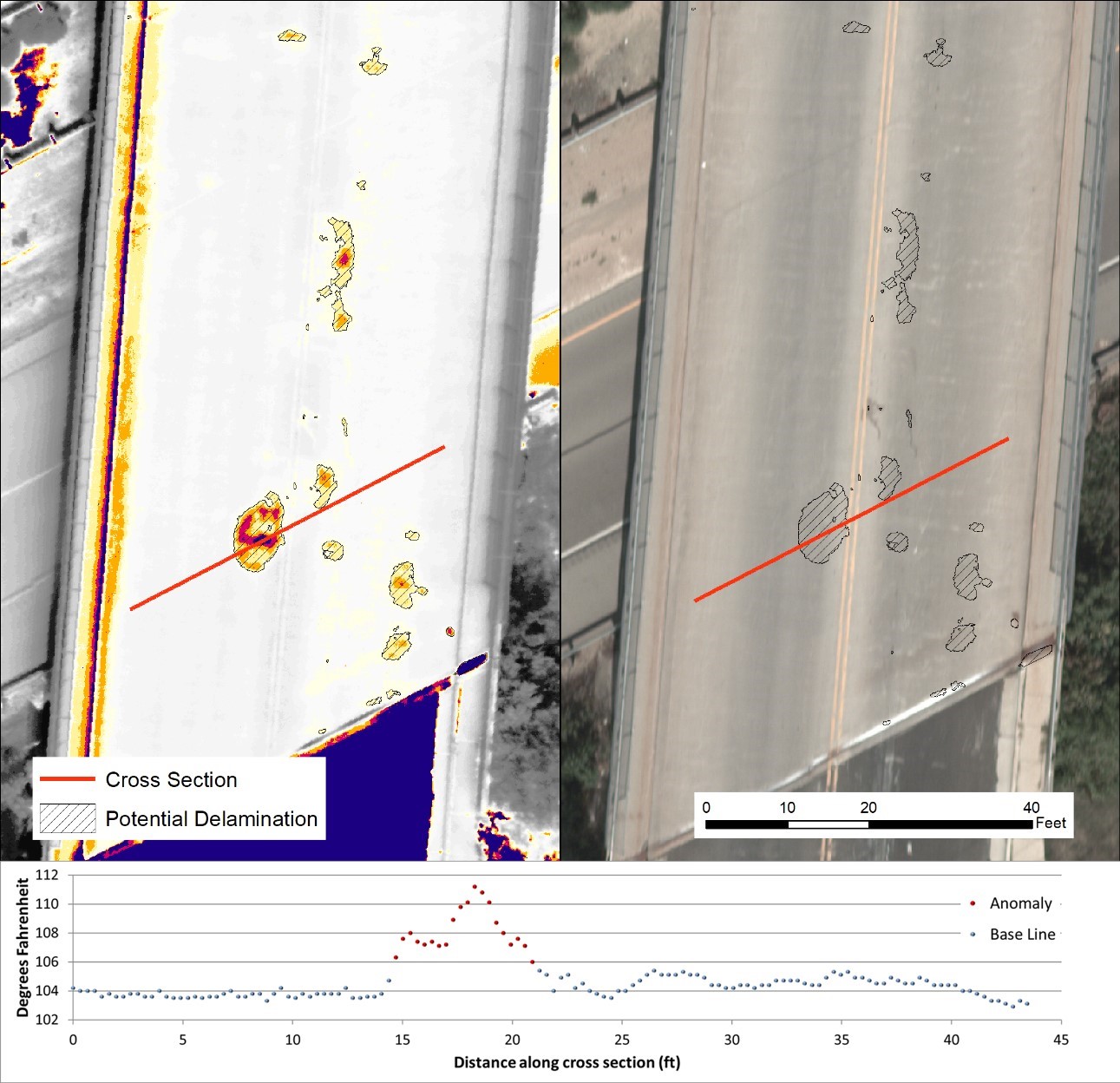 (Image: NV5 Geospatial) The left image is a view of a bridge deck in thermal infrared with color ramp highlighting thermal anomalies; on the right is the same bridge in true color. The red line represents the cross section displayed in the temperature graph below.

Considering one of the primary objectives of President Biden’s Infrastructure Law is to repair America’s bridges, we expect to see thermal technology playing a critical role in assessing structural damage for the rebuilding effort.