Distance = Speed x Time. Such a simple formula, and it’s all you really need to remember to appreciate how LiDAR works. We know the speed at which a single beam of light energy is emitted from a device, and the device then records precisely how much time it takes for that pulse to reach a point on an object and then reflect back to a sensor, providing the exact information for how far away from the device that point on the object must be. Multiply that by millions of laser pulses each second, and what results are clouds of points that can be interpreted as three-dimensional surfaces. Apply to the surfaces the images that have also been collected, and a truly photo-realistic digital model is the result.

Terrestrial and airborne LiDAR have been a boon to archaeologists and historians. One reason is that because LiDAR can penetrate through vegetation, structures behind and below obscuring canopies or densely planted agriculture can be identified and measured. In 2013, researchers shared remarkable imagery of dozens of previously buried temples in Cambodia situated under rice fields, a place where landmines make ground-based explorations extra hazardous.

Discovery, preservation, and curation are all forces that have motivated CyArk to use LiDAR in their quest for cultural heritage documentation. Ben Kacyra and his wife Barbara founded CyArk in 2003 to preserve cultural heritage sites worldwide through digital efforts. As an expert in integrating 3-D imaging with engineering models, he knew that capturing highly detailed spatial data would be an investment in the preservation of monuments that are at risk of destruction from natural and social forces. In his TED video, Mr. Kacyra describes how they sought to capture data from hundreds of sites with these rapid and high-resolution methods. One such place, a UNESCO heritage site of the Royal Kasubi tombs in Uganda, was later torched by arsonists but reconstruction is possible because of the data that CyArk had recorded and archived. 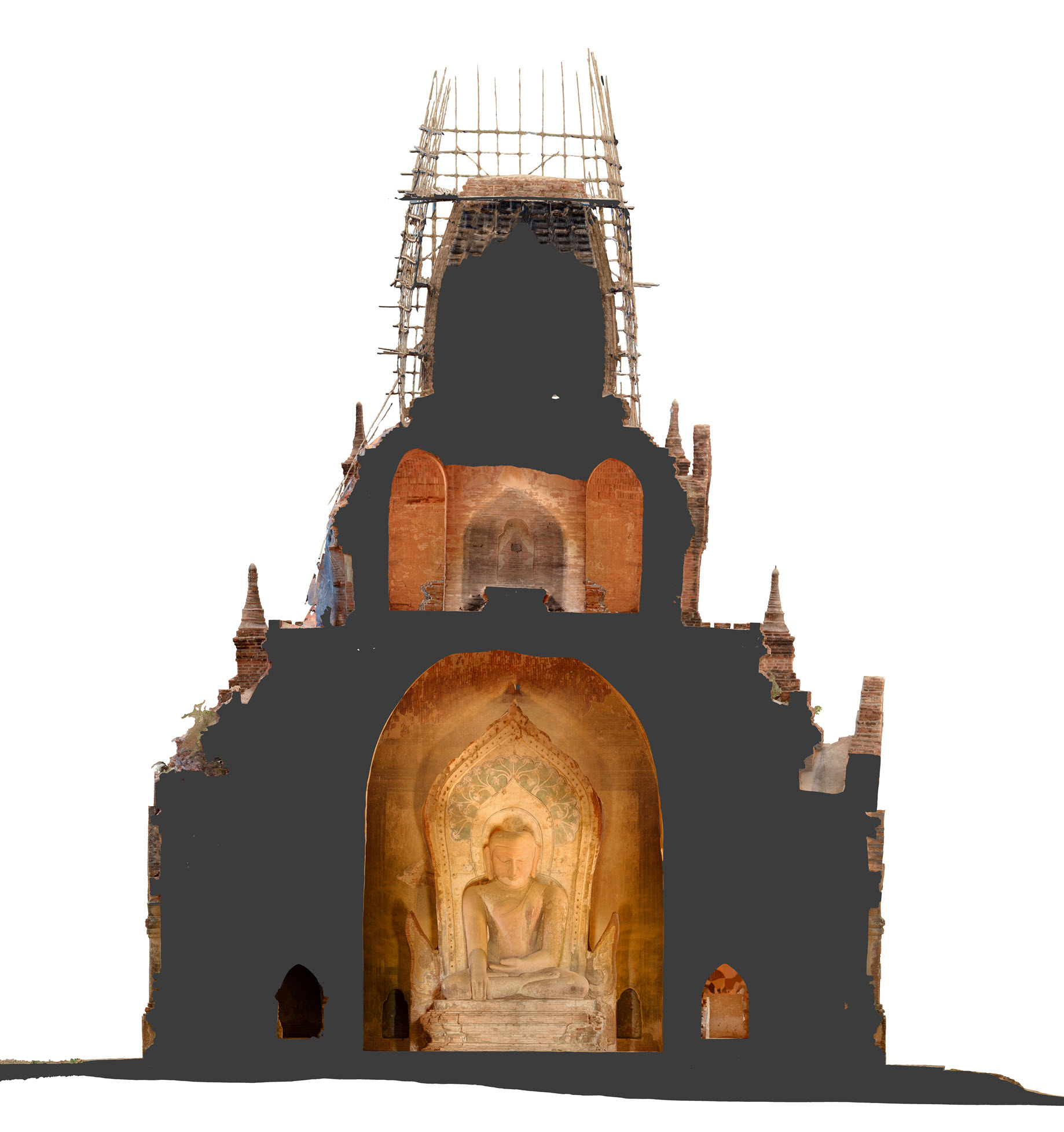 LiDAR scanning provides 3-dimensional perspectives as well as slices that allow for detailed architectural views. This Buddhist Temple is in Bagan, Myanmar.

When Mr. Kacyra retired in 2016, John Ristevski took over as the CEO and chairman of the nonprofit company. Ristevski has an ideal background for this new role, as an anthropologically-focused engineer  and an expert in collecting highly-detailed location data. Before CyArk, his title at HERE was vice president of Reality Capture, and he led the team that produces the LiDAR-generated world for autonomous vehicles to navigate within. Ristevski’s original earthmine  company was bought by Nokia and became HERE, now owned by BMW, Audi and Daimler. Clearly, he knows a thing or two about capturing location data.

Capturing the data has always been the relatively easy part, and slowly the processing capabilities are becoming more powerful, especially with higher capacities for computation. This has allowed CyArk to be true to its mission to not only capture and archive the information but to help others better understand and appreciate the value of the cultural heritage. By working with those who have deep knowledge about the sites, the collection of the data itself can be shaped by the questions that they have.

That value is often informed by the specific needs and requests of the local experts with whom CyArk works. In the 11th – 13th centuries, there may have been over 10,000 Buddhist temples, pagodas, and other structures in use in Bagan, Myanmar. Over 2,000 of these still exist but are at constant risk from earthquakes, such as the one in 2016 that destroyed several hundred temples. Fortunately, CyArk had scanned some of the Bagan temples just prior to the earthquake and is now working on producing detailed digital recreations of the structures, to aid in conservation work. However, it’s not only the high-tech engineering-quality reproductions that are helpful on the ground. As Ristevski shared, sometimes it’s even more basic mapping data that the local agencies need as well, such as the shapefiles of building footprints that CyArk was able to provide.

Having detailed 3D renderings of structures will aid in conservation of temples in Myanmar from the 11th-13thcenturies.

There is a sense of urgency to capture data and imagery from these cultural sites and venues. Structures that have managed to survive intact for hundreds or thousands of years are jeopardized by political and economic strife, or have only avoided calamity because of the unpredictability of earthquakes or other natural disasters. CyArk is not dawdling in their progress to reach new places but they are also not willing to sacrifice quality while in a rush. As Ristevski describes, “It’s a complex machine, the full life cycle of planning, capturing, and processing. Fortunately, we are able to use many existing technologies but it is time consuming to do things robustly. We are extremely committed to ensuring quality with a rigorous methodology.” It’s a positive feedback loop: produce high-quality results and be recognized by others to fund more high-quality projects.

Going forward, CyArk will continue to plug away at its ambitious agenda but do so in a manner that is increasingly open, by sharing both their techniques and results in new ways. Trainings in methodologies will be offered more regularly and widely, and they are committed to the potential of virtual reality to further enhance the three-dimensional experiences of cultural heritage. For example, they have been experimenting with recording ambient sounds to add full audio immersion to their site archiving processes. Ristevski sees app-based virtual reality as the next generation of their educational materials.

Plus, they aim to more readily share the captured data itself, a welcome idea for the global community of scholars, conservationists, and the public alike. “New people need to know that these places exist. The more people are aware of these amazing places, the more they will care about [them],” Ristevski said.

Stories & Lies: What an Atlas Reveals
A Snapshot of Drone Education Programs in the United States
Geoinspirations Podcast Series: Patricia Carbajales-Dale, Promoting GIS for Good
A Perfect Match: Planning and High-Res, Current Imagery
How to Build Dynamic Geospatial Applications: A Better DX for a Better UX
Developing a Drone Program or Course at Your Institution
Podcast: Why should you take a closer look into Open Source GIS?
How to Design your GIS for Today and Beyond
Dust Off Your Bookshelf and Escape with an Atlas
Virtual Transportation Summit 2020
Podcast: Census 2020 - What's next for GIS professionals?
Keep Your Projects Moving and Meaningfully Engage with Your Community Using ArcGIS Hub
Maximize your GIS Workforce Productivity with the Cloud
GIS Tools for Back to School