Like the cartographers of centuries ago, today’s GIS professionals need to analyze and make critical decisions based on real facts on the ground.

Back more than 500 years ago, without the benefits of aerial perspective, mapmakers like Henricus Martellus created proximate renditions of the rounding of the Cape of Good Hope in South Africa. That suddenly opened the New World to Europe, via western routes of exploration that were once thought impossible. (Columbus may have used Martellus’ World Map to persuade Ferdinand and Isabel to back his voyages to the Indies.)

How much more powerful the tools are today, thanks to high-resolution aerial imagery and GIS, which can create exact renderings where each pixel on the map represents 2.8 inches on the earth. This kind of accuracy and easy access enables millions of pivotal decisions by businesses and governments to help develop new communities and enhance the quality of life.

It has certainly made a difference in rapidly growing regions of the U.S. like Apex, North Carolina, just outside Raleigh and the Research Triangle. In order to file for reimbursements from the state, the city once had to rely on satellite images to show officials all the roads it had built, improved, and maintained, but those photos were blurry and often out of date — and that necessitated teams going out into the field with measuring wheels.

All that changed with the introduction of up-to-date, high-resolution imagery integrated with a GIS platform. This enabled the city to measure large areas of Apex in a short time and with accuracy of measurements guaranteed to be within six inches of the distance on the ground (more precise than most lasers and, in many cases, than a technician onsite) — all from their office desktops. As a result, Apex banked more than $1 million of taxpayer money from the state of North Carolina and changed the way it conducted business.

Halfway across the country in the Houston area, high-res aerial imagery has changed the way Mike Stone Associates, Inc., a full-service management consulting and planning firm, gets the job done. Not willing to rely on traditional approaches to in-field measurements, the GIS technicians were looking for a new approach to field inspections, data collection and analysis. The maps they had been using lacked detail and often proved out-of-date, failing to capture new buildings and other features in Fort Bend County. But with sharp and current aerial captures, the tech staff can now detect differences between ground features with a high degree of confidence without leaving the office. No one needs to walk every foot of sidewalk and pavement with a wheel, then enter the data manually at a later time. The company has cut hours spent on-site by a factor of five. Besides saving time, they have prevented wear and tear on equipment and trimmed the cost of vehicle maintenance.

Momentum Solar, a Metuchen, New Jersey solar panel installer, had a different challenge. Expanding from its original New York/New Jersey base, it needed a better system to assess and qualify potential clients, but with often obsolete satellite imagery, the company couldn’t view the same property over several seasons. Measurements, panel sizing, and energy calculations are optimized when comparing leaf-off imagery from the spring to leaf-on imagery from the fall. Historical archives depicting changes in the canopy supplement the analysis. These aerial assets help every step of the way, from lead generation through proposal development, installation, and customer service. 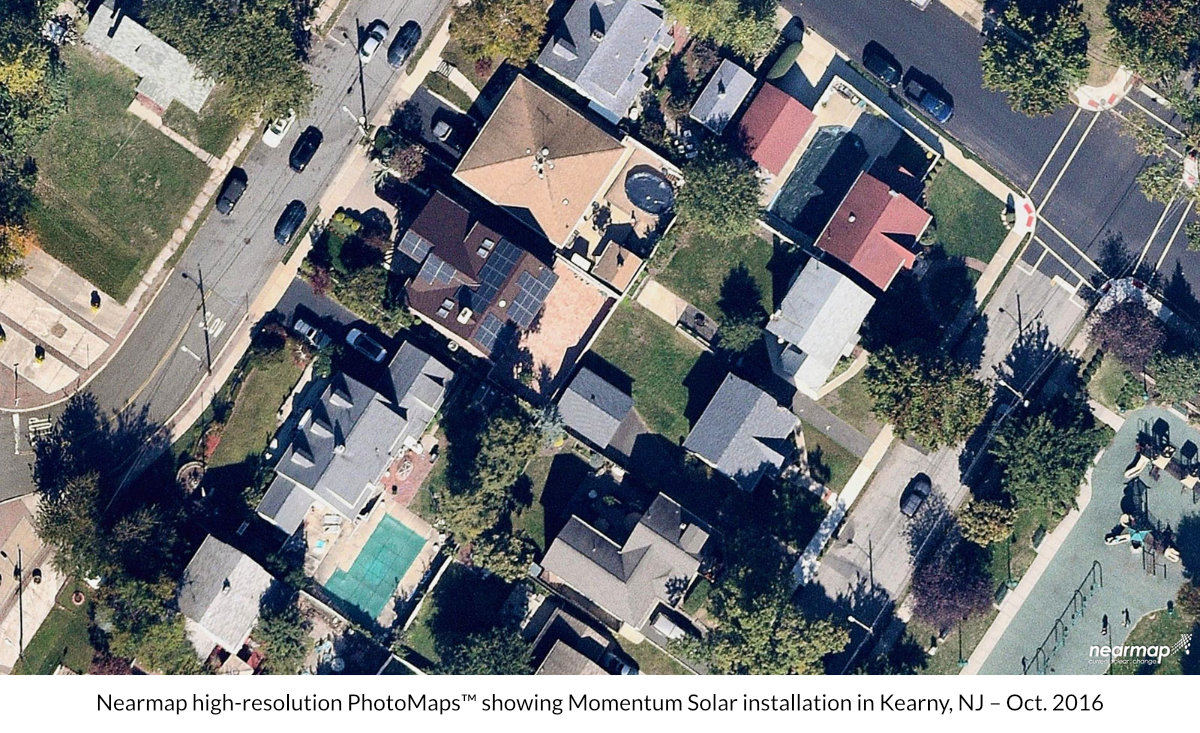 High-resolution aerial imagery, captured at least twice a year, changed the nature of Momentum Solar’s business. With faster and more accurate assessments of prospective customers, the company can now qualify 1,000-3,000 homes a week, doubling its previous volume. And because it can generate a proposal in 5-7 minutes — one-third the amount of time it used to take — the company has slashed the average time to deliver a quote from nearly two weeks to two days. 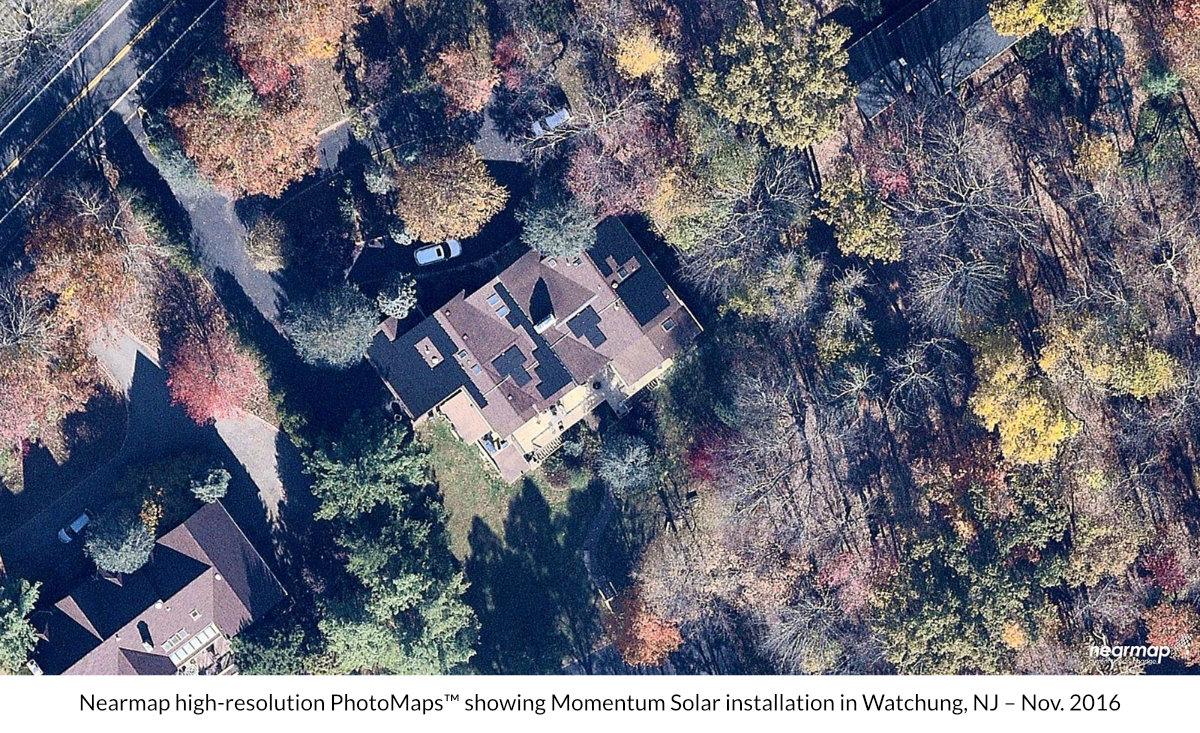 Now imagine that same sharp and frequently updated imagery not just from a top-down perspective, but with oblique or panoramic views — and the ability to measure the heights of structures from different angles with a powerful zoom feature.

Consider how that sort of bird’s-eye view might help develop a new emergency management system for police, fire, and EMS teams in a city like Chicago. You can plan the most efficient routes to every location based on highly detailed, up-to-date visual information. The imagery allows you to see every potential obstacle on the ground: construction projects, large equipment blocking lanes, streets under repair, new curve lines, and barricades. Zoom in on a building and you have instant access to a particular window on the tenth floor of a specific building along with height measurements with pinpoint precision.

Such GIS capabilities aren’t just for city officials. Utilities can look for damaged poles, sagging power lines, tree heights, and line span distances all using oblique imagery. Telecom companies can rely on panoramic features to optimize the range of signals for cellphone towers by locating them far from high structures. An events company might use an oblique perspective to deploy “blinds” in order to limit the visibility of, say, a rock concert from surrounding buildings, as well as to choose sensible locations for signage, tents, food carts, and entrance and exit routes (to say nothing of selecting a helicopter landing area for the main acts).

Maps have long been instrumental in military, commercial, and political decisions that changed the course of history. Today, the most advanced maps, derived from imagery that relies on unprecedented clarity and currency, are putting awesome power into the hands of GIS specialists.