Drones to the Rescue

There has been an explosion of interest and coverage in the press about unmanned aircraft systems (UAS or drones), but sadly, many of these stories have negative connotations covering incidents such as near-misses with manned aircraft, invasion of privacy, illegal operations, or illicit payloads.

This article aims to remind our readers about some of the positive applications of UAS. According to DJI, one of the world’s biggest drone manufacturers, over 65 lives were saved by drones last year alone.

The American Heart Association reported that there were more than 350,000 incidences of out-of-hospital cardiac arrests with a 12% survival rate in 2016. The likelihood of survival after cardiac arrest without CPR and defibrillation decreases by 7%-10% per minute. Thus, any technology that can reduce the time needed to deliver lifesaving equipment such as an Automated External Defibrillator will likely reduce cardiac arrest-related fatalities. In fact, according to Matthew Sweeney, CEO and co-founder of Flirtey, a drone delivery company, the integration of an AED delivery drone with ambulance services can significantly cut response time, from the national average of 7.9 minutes to just 5 minutes. While the 2.9 minutes improvement in response time may seem trivial, this translates into as much as a 29% increase in survival rate.

In addition to AED, the delivery of emergency supplies (e.g., water, medication) after natural disasters, as well as the delivery of an EpiPen for someone experiencing a severe allergic reaction, also hold great promise for reducing human suffering and saving lives.

In the country of Rwanda, companies such as Zipline have utilized UAS technology to bring supplies such as blood to remote locations. Why? The abundant mountains and heavy rains make the roads nearly impassable during parts of the year.

Zipline’s process is straightforward. Once an order is received by the central storage facility via text, the requested supplies are securely packaged and flown to the hospital at the speed of 100 km/h. The whole process takes as long as a pizza delivery, but instead of pizza, the payload is lifesaving blood, delivered in under 30 minutes. Ghislane Ihimbazwe, a 2-year old, was saved by such a delivery. The blood delivery, which would have taken three hours by car, took six minutes by drone.

One of the most significant areas for drone medical deliveries has been in the maternity ward. Blood loss from childbirth kills 100,000 women each year and is 20 times higher in Rwanda than in the United States. A Rwandan woman who started to bleed out after two days in labor would not have survived to see her baby if it wasn’t for Zipline’s blood delivery.

Zipline has grown exponentially since it was founded in 2016. Today, the company operates up to 500 flights a day and supplies 21 hospitals, providing aid to 8 million citizens of Rwanda.

As population continues to swell in major urban centers, more and more people are moving into formerly undeveloped lands where development meets or intermingles with wildland vegetation, an area known as the urban-wildland interface. Consequently, when a fire is started in the wildland by lightning strikes, downed electrical lines, or other causes, the toll and property damage can be catastrophic.

One way to reduce the threat posed by wildfires is to monitor the urban-wildland interface with drones, especially during periods of extreme fire danger (e.g., during Santa Ana wind events in Southern California). By equipping drones with thermal infrared sensors, local, state, and federal agencies can quickly spot and potentially extinguish local wildland fires before they get out of control. In addition, agencies can use the same technology to quickly identify and extinguish embers during periods of less unfavorable conditions (e.g., calmer winds), in order to contain and control fires before the return of more unfavorable conditions.

Aside from protecting homeowners and properties, UAS equipped with thermal infrared sensors can also reduce injuries and fatalities during emergency response and recovery. In much the same way infrared sensors can spot embers and sources of fires, they can be used to identify simmering hotspots in structure fires and provide situational intelligence to first responders, which may change what was thought to be the appropriate course of action. Similarly, during recovery missions after firestorms, thermal infrared sensors on drones can single out lingering hotspots in burned areas and help recovery staff gauge whether it is safe for them to investigate further.

When coupled with other technologies such as GIS, drones can be used to provide critical information that evacuees are often eager to know. For example, in the aftermath of the Northern California wildfires of October 2017, state and local officials partnered with industry to leverage GIS, aerial imagery, and drone photos to create story maps and interactive visualizations that show affected areas before and after the firestorm. 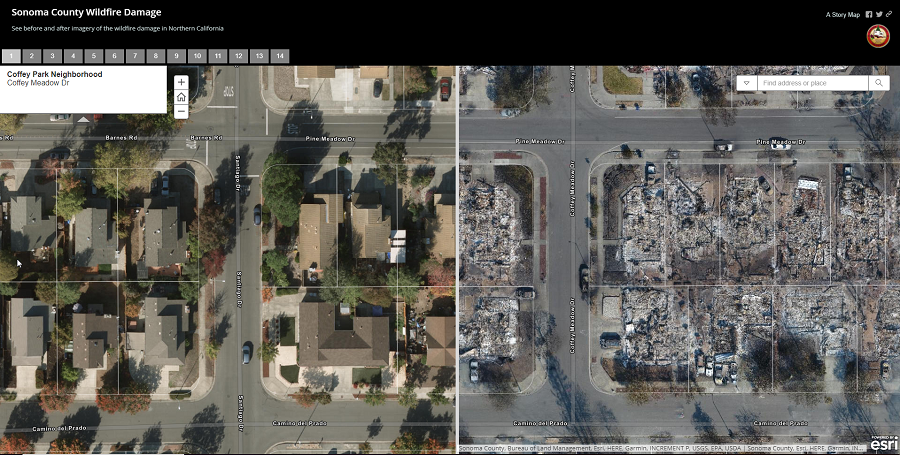 Much like any new technology (e.g., automobiles, manned aircraft), there are risks and benefits associated with the use of drones. However, we should not let the risks stifle innovations and the development of these technologies, especially since history has shown us that regulations and education can reduce the associated risks over time (e.g., seat belt regulations, the campaign against drunk driving, improvements in air traffic control). In this article, we have touched on only a small sample of the lifesaving applications of UAS technology and have hopefully convinced you of its immense potential. We challenge decisionmakers to think about the number of lifesaving opportunities that are being forgone daily by not adopting this technology, rather than focusing on the associated risk and liability.