This article brought to you by Laser Technologies.

When a major wireless company wants to deliver better phone and data service to customers in heavily populated areas, it looks to put up additional small cell nodes – or micro antennas – to manage the increased traffic.

Small cell nodes, which are more discreet structures that are lower to the ground, are part of a distributed antenna system (DAS) network to better manage urban data requirements. The increasingly popular DAS architecture delivers critical data load-balancing so that every smartphone in use won’t be pinging the same towers, which results in stronger service for cell users. 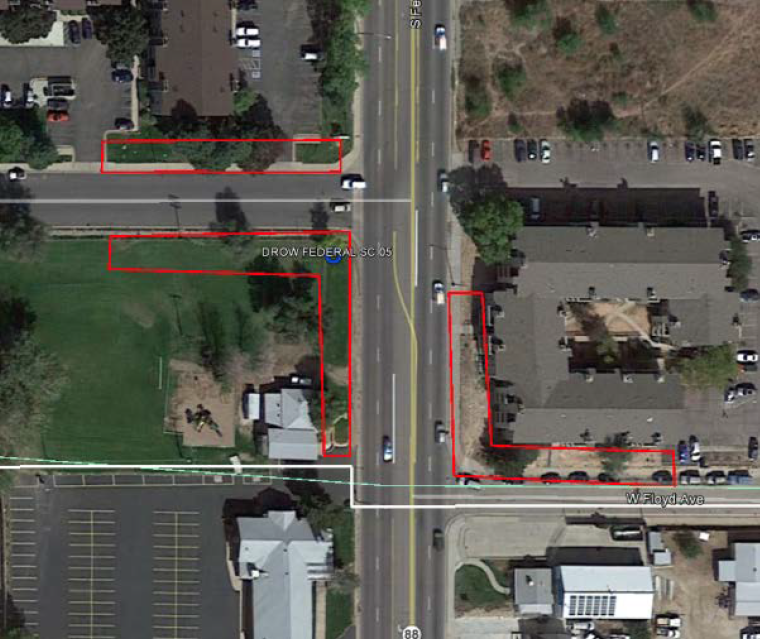 One major wireless company was looking to improve service in metro Denver using this very idea, but before it could “punch a hole” in the new area, experts had to determine whether it was feasible, in specific urban areas, to put up these micro antennas without impeding on current utilities.

And that’s what Downtown Design Services Inc. (DDSI) does best. DDSI offers high-quality design, drafting and surveying consulting in the oil and gas, fiber optic and energy industries, as well as for municipalities, local governments and utility companies.

DDSI was tasked with surveying utilities in areas where an architectural and engineering company conducts preliminary studies to put in new small cell nodes. The end goal was to erect 10 small cell nodes on public right of ways and not on private property, and it was DDSI’s job to deliver accurate surveying critical to moving the project forward.

However, the field crew learned a lot about the project after the first day, and DDSI switched to more advanced laser and drone applications from Laser Technology Inc. (LTI) to execute more expeditiously.

Time Not on Their Side

Mike George is a project manager for DDSI and an FAA-certified drone pilot, and his mission was to capture data in the field to help determine where the new small cell node structures can go. Before he launches a drone, George goes through rigorous preflight planning to obtain accurate readings of the tallest structure in the general vicinity – trees, utility poles, light poles, etc. – to fly the drone above that altitude to safely capture the highest-quality imagery of the terrain below. 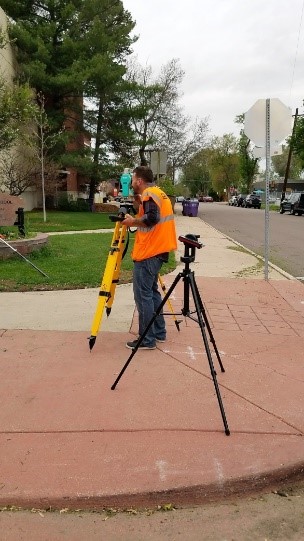 The data gathering was taking too long, and after just one day, George knew the project wasn’t going to meet the budget.

“When we started off, we were going to do traditional surveying,” George said. “But after getting into it, some of the areas were more congested than we originally planned, and we had to consider other tools to do it better and faster.” 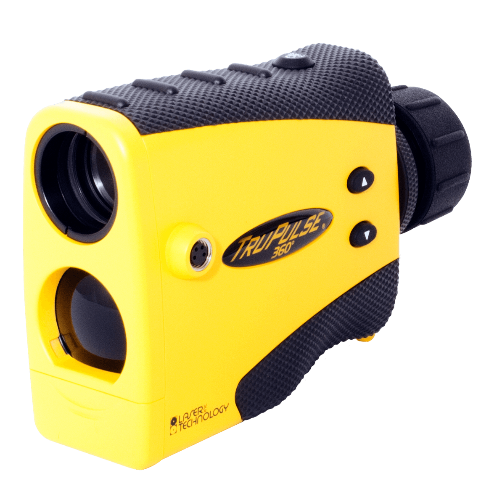 That’s when George turned to an LTI laser rangefinder, which he had used for more than a decade on previous projects.

“I’ve used LTI’s lasers initially to do some mapping-grade data collection,” George said. “Now working in surveying, the laser is just as advantageous.”

George used the LTI TruPulse® 360 rangefinder as a first walk-around to obtain site data for the drone, identifying the peak above ground level (AGL), establishing ground control points, and setting the pre-programmed grid for the flight. A measuring tool as easy and mobile as an LTI laser rangefinder significantly sped up the process without sacrificing any measurement accuracy.

Not coincidentally, however, George found additional applications for LTI’s laser that saved just as much time as peace of mind on this project.

“As the project went along and we started processing data,” George said, “we realized that the drone didn’t capture everything, and that some data wasn’t as high-quality as we had hoped.”

The issue was that smaller trees in the area that were dead or didn’t have any leaves were difficult for the drone camera to pick up. 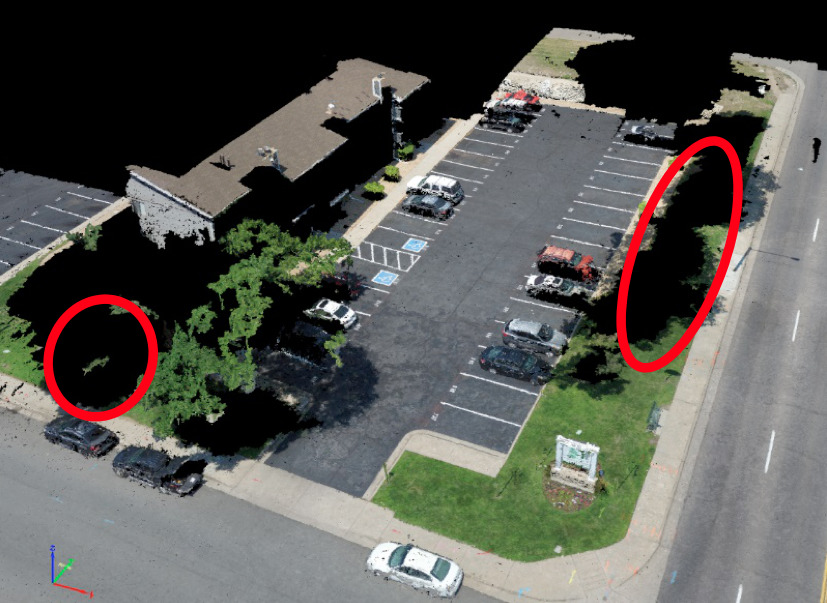 “Even though those trees wouldn’t necessarily affect the antenna, we still needed to know they were there. We could shoot them using the LTI laser, mark them in the field notes, and have the drafters add them in later when creating the plats for review.”

Additionally, DDSI sought to capture the canopy of the trees in the right of way. Measuring height in the preflight routine could help determine how much blockage there might be for a new antenna, but knowing the canopy width of these trees also can help estimate the root size below the surface, which affects how and where to pull fiber for these new small cell antennas.

So after the drone mission, George and his field team grabbed the LTI laser to quickly survey the remaining landscape. Armed with the appropriate heights and widths, DDSI could use the missing line routine using the built-in compass as well as the height routine to get the additional measurements they needed. 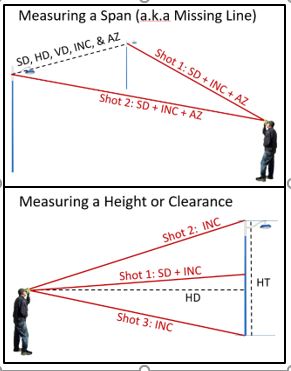 “Using the LTI laser rangefinder was a huge time-saver because some of these sites had up to 100 trees, and trying to identify some of these smaller ones from the drone imagery proved very tough,” George said.

The real benefit, however, was the efficiency gained from not having to make a second trip to each site.

“You don’t know what [data] you’re going to get until you get back to the office,” George said. “It often takes four to six hours to process the drone imagery. But after processing and analyzing data for this project, we didn’t have to go back and fill in the gaps, because we knew we had what we needed.”

Field project managers everywhere are tasked daily with doing things more efficiently, and George and DDSI discovered just how much time they could save on this DAS project using a combination of LTI lasers, drones, and photogrammetry processing software vs. traditional surveying equipment.

By switching to an LTI laser rangefinder after Day 1, DDSI’s 10-site survey project was successfully completed nearly three times as fast. George and his teams were expertly surveying up to four sites a day, as opposed to only 1.5 sites on the first day.

In addition to the faster turnaround times, DDSI also could deliver comprehensive, high-quality documentation to the architectural and engineering firm consulting with the wireless company.

“When we turned our imagery over to the A & E team,” George said, “they had high-resolution orthoimagery instead of only the typical black-and-white deliverables. The team found that invaluable, and it builds a tremendous amount of value for our reputation.” 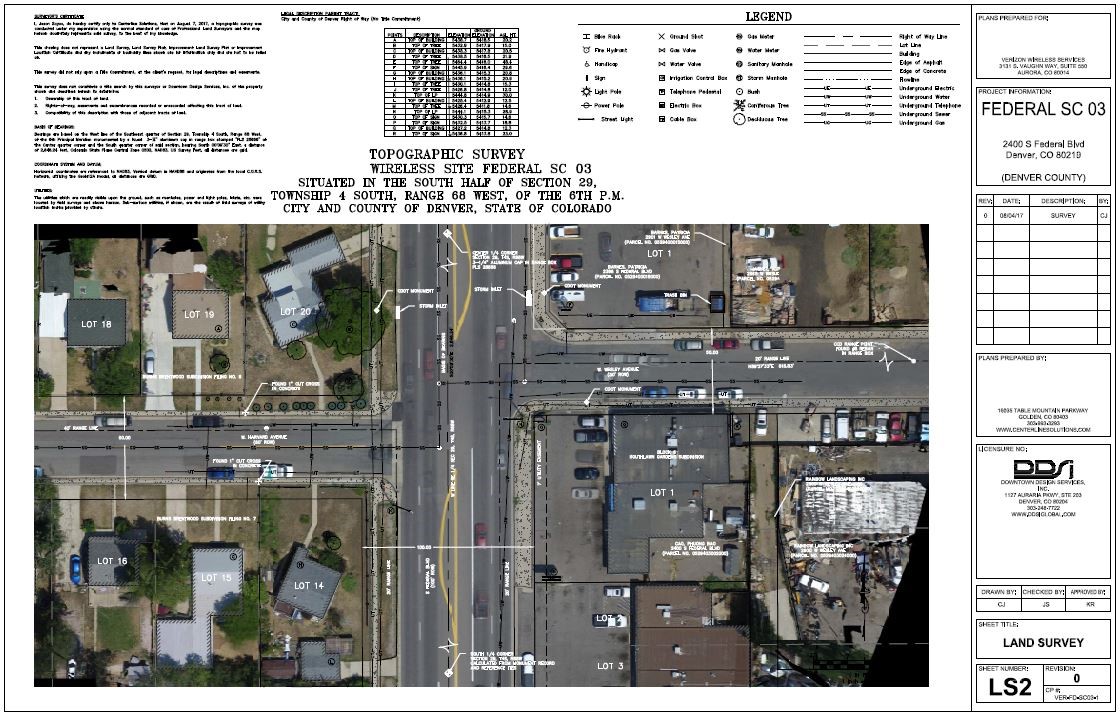 But brand image is just one of countless reasons George considers an LTI laser rangefinder an essential tool in his drone kit.

“The drone industry is very close to a zero-mistake industry, especially in a sensitive location,” George said. “It’s critical to incorporate all the tools we have as a surveying company to be as safe as possible in the shortest amount of time for our clients, and LTI lasers certainly helped us deliver on that in this project.”

Interested in learning more?  Watch our webinars from Laser Technology.