Christian Brodbeck is standing in a small village in western Rwanda. It’s hot and dry. There is no air conditioning in the buildings and no breeze outside. Actually, there isn’t any running water or electricity either. And, of course, no Wi-Fi. Yet Brodbeck is receiving some of the highest accuracy positioning data possible in a region as remote as any in the world.

“It’s mind-boggling to me that I am out in the middle of nowhere and this piece of equipment is getting amazing accuracy,” Brodbeck says.

Brodbeck is using a Trimble® R2 GNSS receiver and Trimble CenterPoint® RTX satellite-delivered correction services, a combination that lets users perform positioning fieldwork in the most remote locations without relying on traditional VRS networks or a local RTK base station.

For the last two summers, Brodbeck has spent two weeks in Rwanda where he and six students from Alabama’s Auburn University get up at dawn to install water distribution systems in underdeveloped communities. The project is part of Engineers Without Borders, a nonprofit organization that delivers sustainable engineering solutions to developing countries. Brodbeck is an engineer in the Biosystems Engineering Department at Auburn University, which formed an EWB chapter in 2014. It’s grown to 200 student members and six faculty advisors. 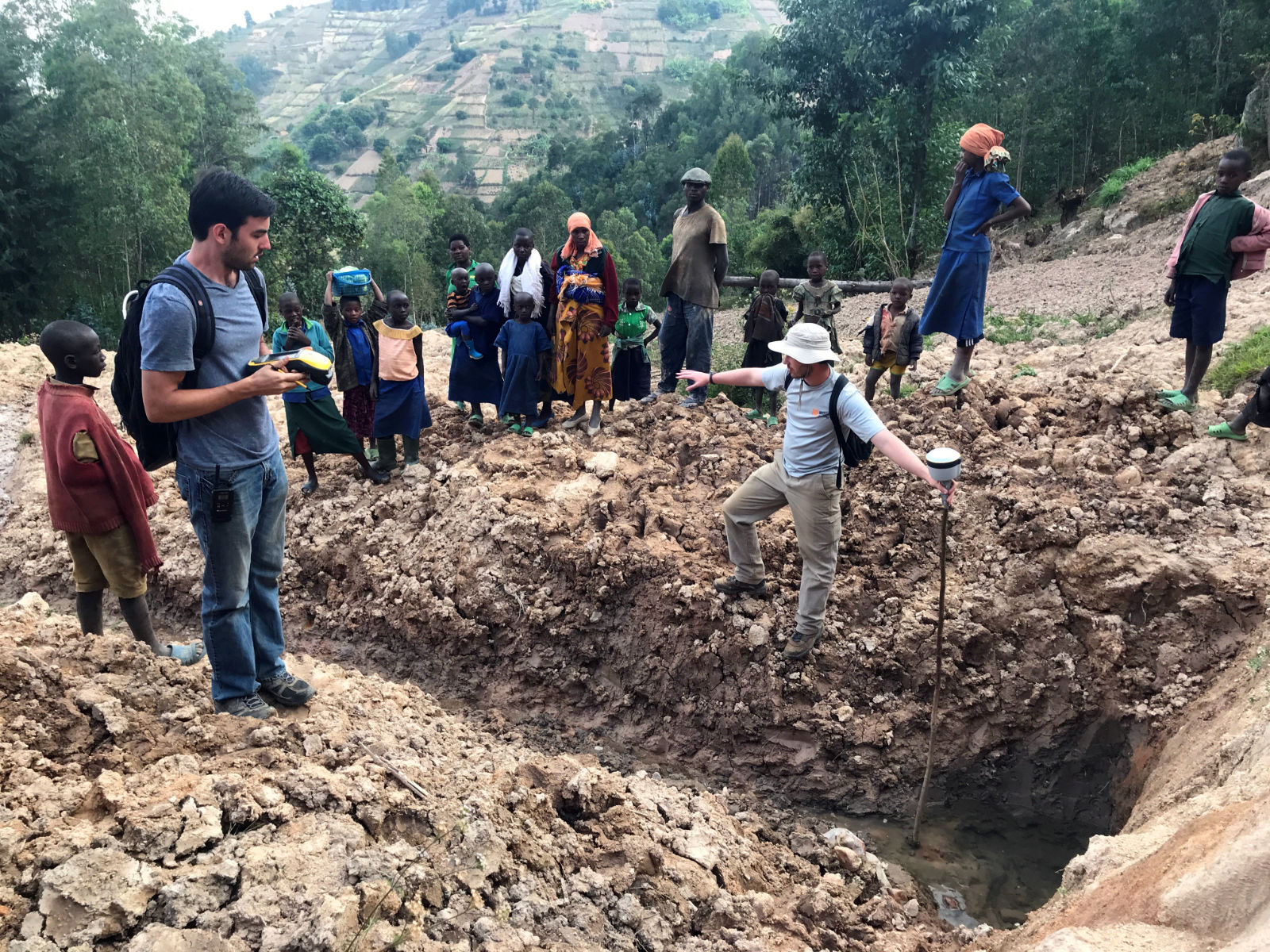 Brodbeck got involved in EWB when engineering students contacted him for help with processing GPS data from one of the trips. EWB attracts students from all facets of engineering – including aerospace, mechanical and civil – and though few know geospatial technology, they learn it as part of their projects.

For the 2017 implementation trip, Brodbeck provided technical support in the geospatial arena. During this trip, the students built a spring box and pipeline to catch water from a groundwater spring and pipe it to the Kabaya Technical Secondary School in Rwanda for cooking and drinking. The engineering students designed the distribution system in Alabama before arriving in Rwanda. The KTSS project was successful, with work finishing ahead of deadline.

Brodbeck realized the team needed high accuracy for these projects and the university distributor recommended the Trimble R2 and CenterPoint RTX.

By this time Brodbeck had accepted the role of Responsible Engineer in Charge and became the lead advisor to the Rwanda team. “I loved the work,” he said.

During the implementation trip, Brodbeck trained the team to use the R2 to generate an as-built map of the water distribution system. The team also performed an assessment for future projects and discovered Mwendo, a community of 3,000 living at 8,000 feet above sea level. To access water, residents had to walk 45 minutes carrying 20-liter jerry cans. “The water flowrate was very low and the community did not have any storage capacity,” Brodbeck said. “The plan was to rehabilitate a 10,000-liter tank, utilize it for water storage and install a pipe directly to the Mwendo Primary School for drinking water.”

The location of the proposed pipeline was mapped as a line feature using Trimble TerraSync software. Using Trimble Pathfinder Office software, Brodbeck exported the line data as positions only, with one point per GNSS position, allowing the line feature to be exported as points with x, y and z attributes. Exporting the data in this manner allowed it to be opened with Microsoft Excel to create a table that displayed each point’s actual elevation and its relative distance from the start of the pipeline. “We used this data to model water flow to ensure the water would be distributed as we had designed it,” he said. Along the pipeline they mapped areas of interest, such as elevations and locations of potential springs.

“This all worked extremely well,” Brodbeck said. “The data collected with the R2 was the backbone of the design the students conducted over the next few months. Trimble CenterPoint RTX provided reliable data when we needed to know the data is accurate and everything works correctly. Without this data, our design would have been incredibly difficult. 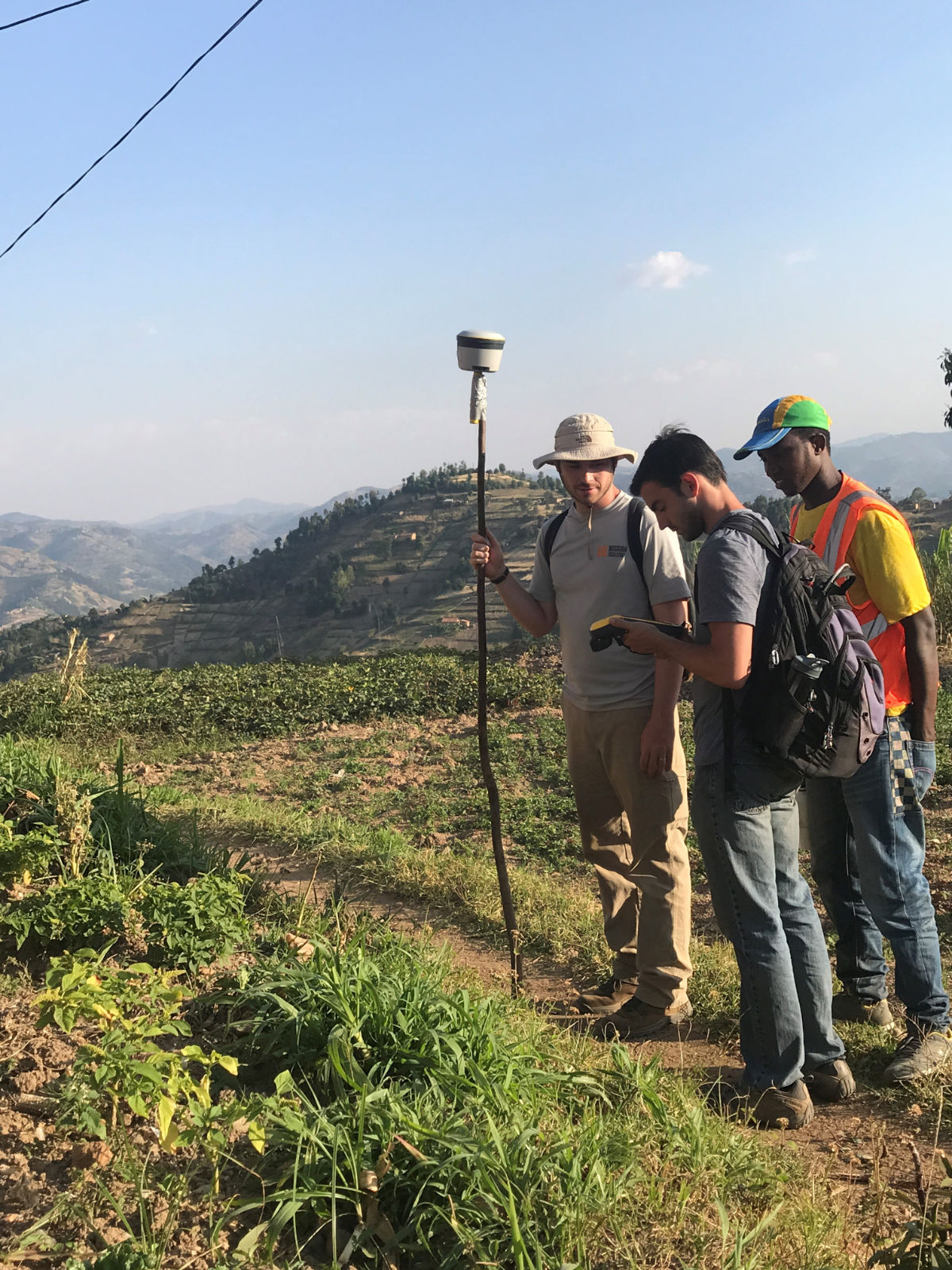 “The Trimble R2 with CenterPoint RTX allowed us to collect 4-cm accurate elevation data,” Brodbeck added. “We fed this elevation data into a Storm Water Management Model to determine flow distribution under a variety of conditions.” The team planned to return and needed accurate data to ensure the design would work.

But when the team went back to Rwanda, there were some unexpected challenges. Digging the trench for the new pipeline started before the team arrived in Rwanda, and the trench did not follow the path the students had laid out. “This was a big deal because the trench that was dug required water to flow uphill, which as we all know, generally does not work very well,” Brodbeck said.

But using the GPS equipment the team verified that the path was incorrect and that the location identified during design would still work. “We used the R2 to verify elevations at five high-points along the pipeline, ensuring elevations were lower than the source point. The individual points were viewed on the Map screen of Trimble TerraSync so that we could view the elevation. Later, we would download this using Pathfinder Office and export it as an Esri shapefile to view the data in ArcGIS.”

The second hiccup was that the community had decided they wanted water in a third location, which the team had not planned. It meant an additional 600 meters of pipe and re-running the scenario with a computer model to check water flows. They worked late nights to complete the addition.

Not surprisingly, working with the elevation change proved difficult. “For the first 300 meters of the pipeline, we only had about three meters of elevation change. After that, the terrain started to drop off so the elevation was not as critical,” Brodbeck said. “However, within those first 300 meters we had to ensure that all points were lower than the start because we were implementing a gravity-fed system. Given the terrain, following traditional survey techniques or using an auto-level would have been incredibly challenging.”

The R2 was used extensively for assessment for future work, Brodbeck said. Much of the data collected was similar to what was collected in 2017. The team mapped locations of springs already tapped and their pipelines.

“We used the R2 to map potential locations for pipelines to install. All this data would be downloaded with Pathfinder Office and exported as SHP files to ArcGIS. Within ArcGIS, we could look at the data and start to make plans for next year. We also used the R2 to create an as-built map of everything we built during the project.”

Only a few students had geospatial experience, but the equipment, like the R2, was easy to operate. Brodbeck has been using Trimble equipment for more than two decades. “We got a few pointers on using CenterPoint RTX, to help with adjustments, but it was very easy to use.”

The team employed local workers for much of the construction, hiring 94 day laborers to dig the 1,600-meter trench and two skilled laborers – a mason and a plumber – for the installation. “By hiring local workers, we were able to provide them with daily wages in an area where finding work is nearly impossible.”

The EWB team put in long days. Lodged at a Catholic church parish, they started their day with breakfast at 7 a.m. before piling into Land Cruisers for a rough 45-minute drive to Mwendo, where a small building served as EWB headquarters and each person would grab their tools and set off on their daily task.

“We would spend the morning working in our respective areas, then gather at 1 p.m. for lunch at EWB Headquarters,” Brodbeck said. After lunch they continued to work until it got dark around 6:30 p.m., when everyone met back at headquarters, stored their tools and drove back to the parish. After dinner, they would review the day’s progress by looking at the GPS data gathered, doing some analysis on how things were progressing, reviewing and updating the budget, and laying out a work plan for each team member for the following day. In addition to the engineering work, they collected water samples, incubating them to determine if the water was safe to drink. 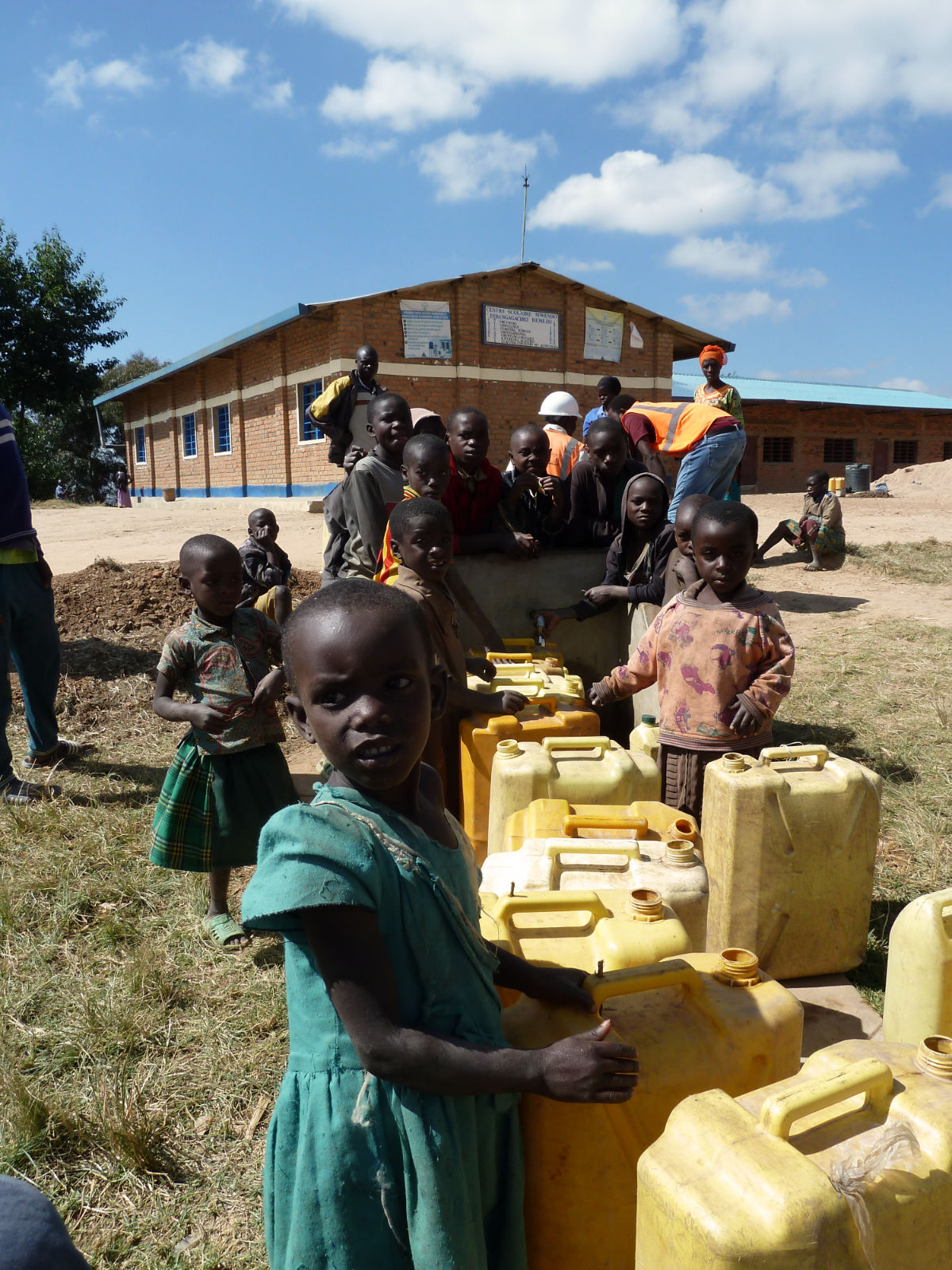 Part of the evening review also included identifying areas needing work. Usually there were two students supervising the pipe installation, two working with the mason to ensure the boxes were built to spec and two students doing assessment. “We would rotate job assignments so everyone had an opportunity to help with different parts of the project,” Brodbeck said. “We would wrap up around 11 p.m., by which time we were all quite exhausted.”

Brodbeck says the students deserve the real credit for the Rwanda success. Not only do they perform all data collection and then work countless hours on the design, they also spend much of the year fundraising because the work is conducted using donations. In addition, the work is extracurricular, so they don’t receive school credit for it. But the work is rewarding. Each project allows the students to learn engineering skills and geospatial technologies while helping to make the world a better place.